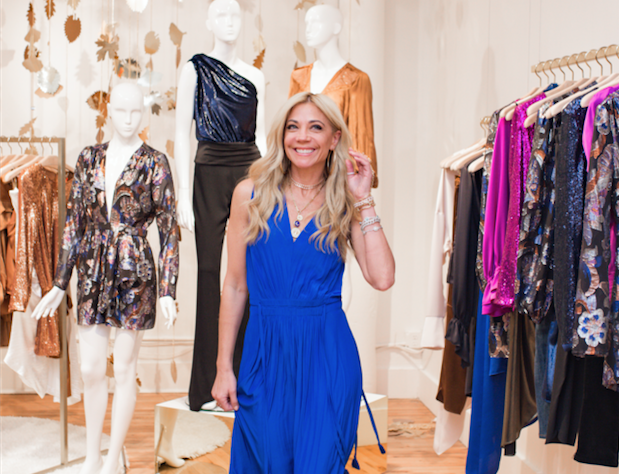 It takes a woman to know what busy women need for their daily lives. That philosophy pushed Ramy Brook Sharp, with no background in apparel design, to form the eponymous Ramy Brook fashion label. Nine years later, the line is sold at some of the highest-end department stores in the U.S.

In doing so, Sharp has created a contemporary womenswear company that is by women and for women, offering apparel intended for all ages. Best known for its use of colorful silk fabrics, Ramy Brook’s tops and dresses are designed to be timeless and versatile for sizes ranging from extra-extra small to large.

“As a woman, I understand what female consumers are looking for,” said Sharp, co-CEO and creative director.

Essentially, Sharp began designing clothes to fill a void in her own closet.

“It was hard for me to find solid, sexy tops to pair with a cool necklace or wear with my jeans,” she recalled. “I told my husband I was going to start my own company and learn how to make these tops. They were available in the designer world, but I wanted them at a contemporary price point.”

With the youngest of her three children in school, Sharp could once again return to professional pursuits. She founded Ramy Brook (her first and middle names) in January 2010, and turned to friends in the garment industry for guidance and expert referrals. One friend sent her to a pattern maker, another to a sample maker.

“They would take me to 39th Street to show me where to buy fabric. Jennifer Miller, the jewelry designer, helped me set up a website. These were all things I knew nothing about,” she said. “One friend led me to a pattern maker, which led me to find a sample maker in Brooklyn—before I knew it, I had a small collection of six tops and one dress.”

The next step was presenting it to the public. Sharp launched the line with a trunk show at her sister’s home in their native New Jersey.

“The women would pick a color, style and size and I would make it,” she said. A second trunk show was held in in New York with Molly Sims, who sold jewelry at the time, and whom Sharp met through mutual friend Stefani Greenfield, former owner of Scoop. The show was even more successful than the first.

“Stefani and Jennifer Miller wanted to see another woman succeed,” she continued. “They were supportive, both as friends and as women.”

While her prior career had been in advertising, creativity was in Sharp’s blood. Her mother had made her and her two sisters’ clothes from McCall’s Patterns, and Sharp would tweak store-bought apparel to suit her own tastes and preferences.

“We loved going to the mall, and though I never had formal training, through my experiences, I always understood what women found appealing to buy,” she recalled.

The trunk shows increased, and led to a connection with Bergdorf Goodman through renowned private shopper Betty Halbreich. As Sharp met with the team, with all of her goods in a dressing room, a stylist for comedian Chelsea Handler stopped in and asked to purchase the lot. With no contract in place with Bergdorf, Sharp sold the stylist one of the tops herself. Shortly after, Bergdorf placed its first order.

Today, the line can be found around the country, in high-end retailers including Neiman Marcus, Saks Fifth Avenue, Shopbop and Bloomingdale’s, as well as more than 300 boutiques. And it’s not unheard of for the Manhattan- and Hamptons-based Sharp to return to her teenage haunt, The Mall at Short Hills, to check out the presentation of her wares.

Sharp’s clothes are designed with a youthful flair, but are suitable for women ages 18 to 80—though most customers range from 28 to about 50. Celebrity devotees include Cindy Crawford, Mila Kunis, Julianna Margulies, Kate Beckinsale and Selena Gomez.

“My 15-year-old daughter can wear it, I can wear it and my mother can wear it,” she said. “That said, our core consumer is a multi-tasking, busy woman who likes to look and feel good when she goes out.”

Sharp remains her own best market research subject. In 2018, the company launched a collection of beach coverups, because Sharp couldn’t find exactly what she was looking for when traveling over the holidays. Her result was an instant sellout.

Also invaluable was the advice and experience of her husband, Rob Sharp, who has a background in private equity investing and began offering operational advice to the fledgling company, which grew rapidly.

“Our growth has been organic. I’m lucky to have had my husband’s support. I understand fashion. He understands business, and with his help and guidance, we tripled in size when I moved the business outside of my apartment to the Garment District. We are continuing to grow at a rapid pace,” she said.

Today, the company has a staff of 45, built over time to accommodate that and future growth.

Three years ago, Ramy Brook opened a store on Prince Street in SoHo, and Sharp plans more brick-and-mortar stores over the next five years, as well as more online sales. The company also has plans to expand its line and reach—a denim collection will be launched this fall.

“I know the power of an incredible jean,” she said. “When you find the perfect pair that fits and feels the absolute best, nothing is better.”

Sharp is also considering accessories such as bags, jewelry, shoes and sunglasses that would coordinate with her clothing. Additionally, the company plans international expansion beyond Canada and Dubai.

“It’s been a fast eight years, and now I have a taste of what I want women to look like and feel like when they buy these clothes. It takes all the anxiety out of getting dressed. I do see this as a full-lifestyle brand, and I want to make it great. I want to fill the spaces where the items are hard to find,” she said. “But we want to be smart and grow it responsibly. The sky’s the limit.”