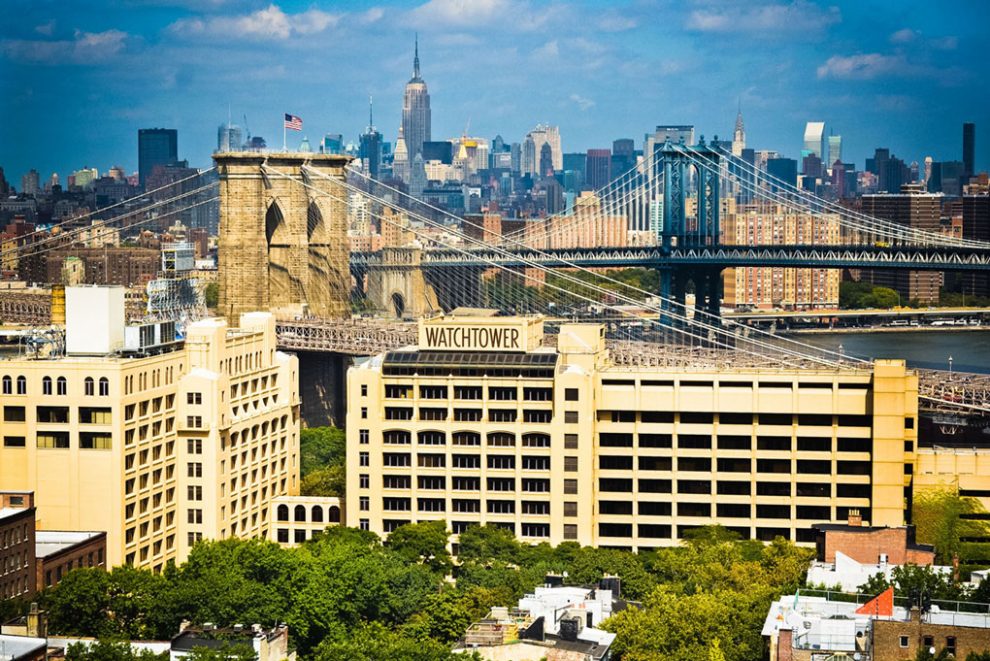 The iconic Watchtower complex in Dumbo, Brooklyn will soon transform into a massive office and retail campus. This past May, plans were revealed for the renovation of the previously Jehovah’s Witness-owned spaces into the ultimate work/play destination.

To be called Panorama, the space will be spread over the five buildings in the area that were previously occupied by the Jehovah’s Witnesses—the two Watchtower buildings and three adjoining brick and timber properties. The five buildings were originally part of the Squibb Pharmaceutical site and were bought by the Witnesses in 1969. The complex became known as the Watchtower buildings and in the coming decades came to define Brooklyn Heights, becoming some of the most valuable real estate in the entire borough. Columbia Heights Associates bought the Witnesses headquarters in August for $340 million.

Gensler, the same firm who did the redevelopment of JFK Airport’s Terminal 5, is leading the design. Once renovations are completed, the campus will offer 635,000 square feet of interconnected office space, 35,000 square feet of retail, 20 terraces with views of the East River and Manhattan skyline and outdoor areas for arts and culture. When it opens, the complex has the potential to bring new stores and businesses to Brooklyn Heights, a historic and mostly residential enclave.

Typical floor plates in Panorama will range from 23,000 to 37,000 square feet, enough for roughly 250 work spaces per floor, about 5,000 workers total and rents will be “competitive,” said a spokesperson for Columbia Heights Associates. Potential tenants range from “creative economy firms to traditional companies,” he added.

“Panorama will be more than just a place to work—it will be a thriving community offering the best visibility and views in New York City, world-class office space, and an opportunity for tenants to infuse the campus with their culture from the very start,” Asher Abehsera of Columbia Heights Associates, the development team behind this project, said in a statement. “Panorama will mark a shift in what America’s best companies expect in an urban office setting.”

Work is currently underway on the renovation of the five-building campus. Some of the old features of these iconic buildings at 25-30 Columbia Heights will be maintained, including the sky bridge, onsite garage and double-height assembly spaces. Renovations are mostly focused on the street level retail spaces, along with new lobby areas, elevators and mechanical infrastructure.

This development project is important because it signals more change on the Brooklyn waterfront and along the East River. The Jehovah’s Witnesses properties defined the waterfront for years, and as older spaces have been redeveloped throughout Brooklyn, a new cohort of businesses with a creative or technology-forward identity have begun to fill spaces formerly occupied by more traditional manufacturers and warehouses—take Empire Stores in nearby Dumbo as an example.

The complex and development team are a joint venture between CIM Group, LIVWRK Holdings and Kushner Companies. The trio also bought the huge parking lot at 85 Jay Street in Dumbo from the Witnesses in December for $345 million. Currently, there are plans to build a mixed-use development on the lot, which could rise as high as 20 stories and increase Dumbo’s current population by 44 percent.

For more information on the Panorama complex, visit livwrk.com or www.cimgroup.com.