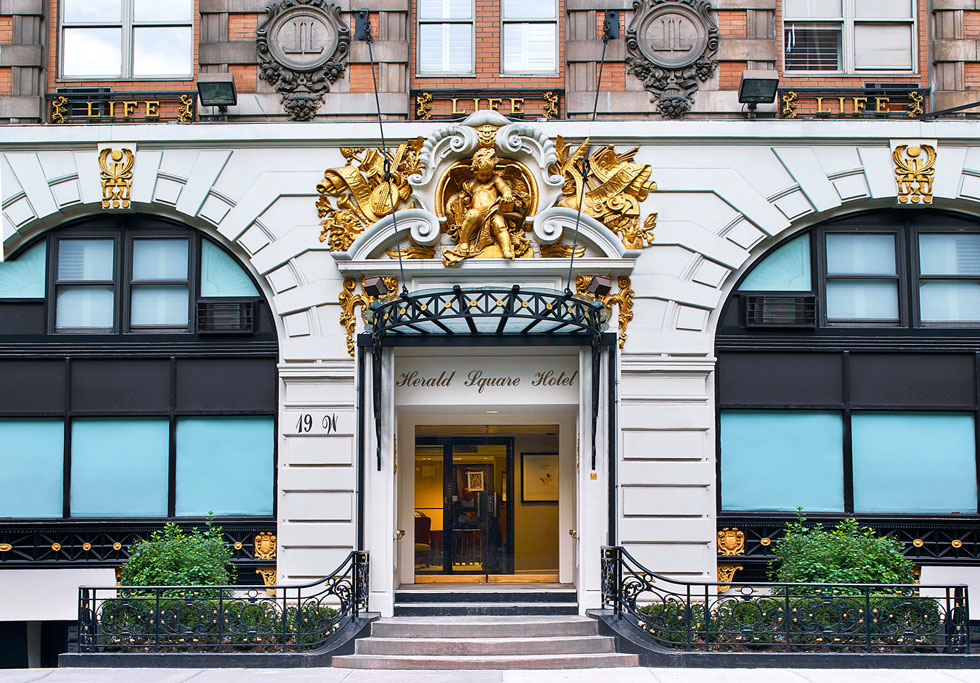 The 1895 structure, at 19 West 31st Street between Broadway and Fifth Avenue in Manhattan’s burgeoning NoMad neighborhood, was designed by Carrère and Hastings, the firm responsible for designing the main branch of the New York Public Library. The ten-story-plus-basement neoclassical building was originally designed as the first headquarters for LIFE magazine.

The redeveloped hotel echoes the original dual-use of this iconic property, where celebrated writers and artists like Norman Rockwell, Charles Gibson and John Ames Mitchell worked, resided and played. By offering a smartly priced and wholly service-centric experience, Life Hotel is introducing a new category of hotel for today’s traveler, blurring the lines between work and play.

“The journey we’ve taken from first stepping foot into this building to opening day has been one of passion and discovery; it has been an archeological dig from day one,” says Mitchell. “There is so much history behind these walls that we were keen to keep intact while creating a hotel that goes far beyond the typical.”

Hanson adds, “The Life brand is all about four-star service at a smart and accessible price. You’ll feel that personal touch and value from the moment you walk into the lobby – the buzz and excitement of people working from our communal tables, enjoying a cocktail at the bar or a bite in the restaurant will be enough to convince you that you’re not in an average hotel. And just wait until you experience a night in one of our guest rooms.”

Skyland Construction was the general contractor; the mechanical, electrical and plumbing (M/E/P) engineer was Guth DeConzo Consulting Engineers, P.C; the structural engineer was Structural Engineers Incorporated; and the lighting designer was Focus Lighting.

MADGI was hired in February, 2016 to work with Oxley to upgrade the property on an accelerated schedule. “After conversations with the clients and Tara, we developed the architectural design for the renovation and completed the project this spring,” said MADGI Principal, Daniel Montroy, AIA. “Our first step was to upgrade the lobby, which was outdated and inefficient,” he continued. “We converted unused space into profit-generating areas, adding a restaurant to an existing lobby bar.” The lobby was reconfigured so that now when guests walk in the entrance, to the left is a cocktail bar, and to the right there is a. Elevators are in the center toward the back of the space, with reception nearby.

The lobby and cocktail bar both have light-colored marble stone flooring installed in a herringbone pattern. The walls feature repurposed wood paneling stained a dark color. The panels were repurposed from a pre-war New York City building. The cocktail bar has matching wood paneling. The bar top is 20 feet long and is made of honed white marble. Adjacent to the bar is a lounge area with sofas, coffee tables and chairs.

On the opposite side is the Life Restaurant owned and operated by Stephen Hanson. It also features marble flooring and wood paneling on the walls. The restaurant has a 400-square foot kitchen.

The lobby features pendant lighting throughout, including in the lobby bar, with wall-mounted picture lights for the artwork displayed.

It is rumored that the cellar level was a thriving speakeasy for LIFE magazine employees and locals during Prohibition. “We are bringing back the concept with a 1,150-square foot, 60-seat downstairs bar/lounge, which can double as a meeting space for groups,” said MADGI Project Manager Daniel Terebelo, AIA, LEED AP, BD+C. “This area is accessible from a dedicated street entrance as well as from inside the hotel, via a ‘hidden’ circular staircase in the lobby,” he continued.

The façade is clad in limestone on the first and second floors, with brick above that. Two oversized arch windows frame the entrance, with one in the bar and one in the restaurant. The team replaced the existing windows with attractive, custom two-story-high windows with a radial mullion pattern of blackened steel. The word “LIFE” still repeats on the limestone above the entrance. The building is considered to be of “outstanding significance” by the New York Landmarks Preservation Commission.

MADGI replaced the previous entrance, as it was not ADA-compliant. The new entrance is impressive, with a modern, glazed look. It incorporates an ADA-compliant elevator.

All 98 guest rooms were renovated to impart a consistent design and feel. There are seven penthouses on the top floor, with two of them featuring their own private outdoor patios. The rooftop houses a chef’s garden, which is used for communal and private dining.

“The typical guest room has high ceilings; white walls; Victorian base, chair, and crown moldings on the perimeter of the walls; wrought-iron bed frames; a desk and desk chair; and a 60″ wall-mounted, flat-screen television,” said MADGI’s Eleanor Balding, Job Captain. “We were going for a modern interpretation of early 20th century design,” she continued. The penthouses also include sofas and armchairs.

All rooms have a modern chandelier and bronze-colored wall sconces. To enter a guest room bathroom, guests pass through a custom wood door fitted with opaque glass. The bathrooms feature floors of small-sized, ceramic, black-and-white tile from Dal Tile installed in a pleasing pattern. The walls are white 2″ x 4″ subway tiles. All bath fixtures—including the seven-inch rain showerheads—are an antique bronze color by Signature Plumbing. New vanities are by Watermark and have Carrera marble countertops.

The owners tapped young up-and-coming New York City artists to create 200 original works for the walls of the guest rooms. The corridors have prints from Australian fine art photographer Steven Laxton. New art and photography will be rotated periodically into the space.