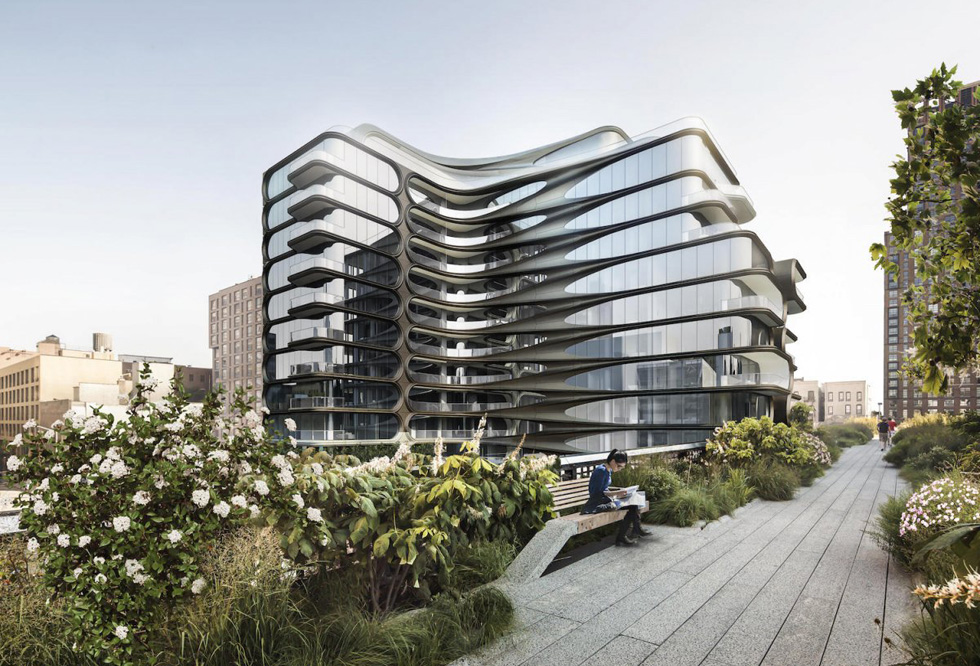 Zaha Hadid’s name has become synonymous with bold, futuristic architecture. And even after her untimely death in 2016, Hadid has continued to garner awards and honors for her exceptional designs.

520 West 28th Street was Hadid’s first New York project. The High Line–adjacent condo building will serve as a living reminder of the starchitect’s legacy, a building that exhibits her signature style and relates to its surroundings.

“It’s sculpture inhabited,” Tiago Correia, the U.S. director of Zaha Hadid Architects, said of the building in an interview with Architectural Digest. “We made a building that very deliberately blurs the lines between art and architecture. That’s our way to pay tribute to the location, to Zaha’s work and to the burgeoning lifestyle in the area.”

The new 11-story condo building is impressive, with an intricate metal and glass facade sculpted into a sloping, curved design. To create the curves in the stainless-steel exterior, each panel was laser cut.

Inside the high-rise, each condo offers top-of-the-line amenities, with windows that open via apps, energy-efficient lighting, a temperature-controlled wine rack that can hold up to 99 bottles, two ovens by Gaggenau, private balconies that overlook the High Line and a 2,500-square-foot sculpture garden and a kitchen with a custom island designed by Italian Designer Boffi. The building also has a variety of amenities itself, including a parking garage with an automatic valet system, the city’s first private 3D IMAX theater, a private spa, fitness center and a 75-foot saline pool with a skylight.

Developer Related Companies broke ground on the project in 2014, and the building recently opened in June. Now, the building has started selling units, starting with a pair of two-bedroom model units that measure 2,147 square feet each. They were sold for $6 million and $6.2 million, respectively. Approximately 60 percent of the building’s 39 units are in contract.

Hadid competed against many other top architects to design 520 West 28th Street. Her style “is an optimistic view of the future,” Related’s Executive Vice President Gregory Gushee told The New York Times. “It’s modern and taking advantage of curves, which is hard to do in real estate—it’s expensive to do, frankly—but the design was so compelling that we decided to spend the money.”

Since it was Hadid’s first NYC building and one of her last designs, it will remain a testament to her legacy.

Besides pushing boundaries with her unusual, innovative buildings, Hadid made strides for women in architecture, a group that remains underrepresented in the field. In 2004, Hadid became the first woman to win the Pritzker Prize, architecture’s most prestigious award, the first of many firsts she accomplished during her illustrious career. “As a woman in architecture, you’re always an outsider,” she told the Financial Times in 2015. “It’s okay, I like being on the edge.”