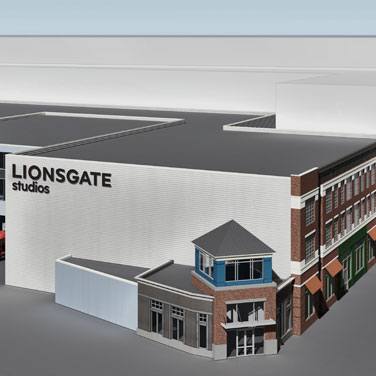 It really will be Hollywood on the Hudson — Great Point Capital Management, a media-focused investment fund run by Robert Halmi and Fehmi Zeko, has signed a letter of intent with film, television and live entertainment producer Lionsgate to build a $100 million production facility in Yonkers, New York, with Lionsgate becoming a long-term anchor tenant and investor in the studio complex. Lionsgate will have naming rights to the studio, which will be redeveloped by National Resources (NRE), also an investor in the project.

“We’re pleased to partner with the Great Point and National Resources teams on a modern film and television production complex that will provide a great home for many of our content creation initiatives,” said Lionsgate CEO Jon Feltheimer.  “It’s rare to find a studio facility in such a prime New York metropolitan area location, and we look forward to being at the center of film and television production growth in the region.”

The complex will include three 20,000-square-foot and two 10,000-square-foot stages and a fully operational back lot.  Construction will begin in November and the facility will be up and running in late fall 2020.

The studio complex will be located in downtown Yonkers, along the newly created Saw Mill River Plaza and next to the new Yonkers train station. The city already hosts dozens of location shoots annually, with film days tripling over the last five years, said Mayor Mike Spano in the announcement.

“This is a game changer for the City of Yonkers and is a testament to the ongoing revitalization of our waterfront,” Spano said.

NRE is a specialist real estate development and investment firm that focuses on the redevelopment of corporate and industrial sites. In the past 30 years, it has redeveloped over $1.5 billion of projects, include the iParks and landmark Hudson River waterfront residences.