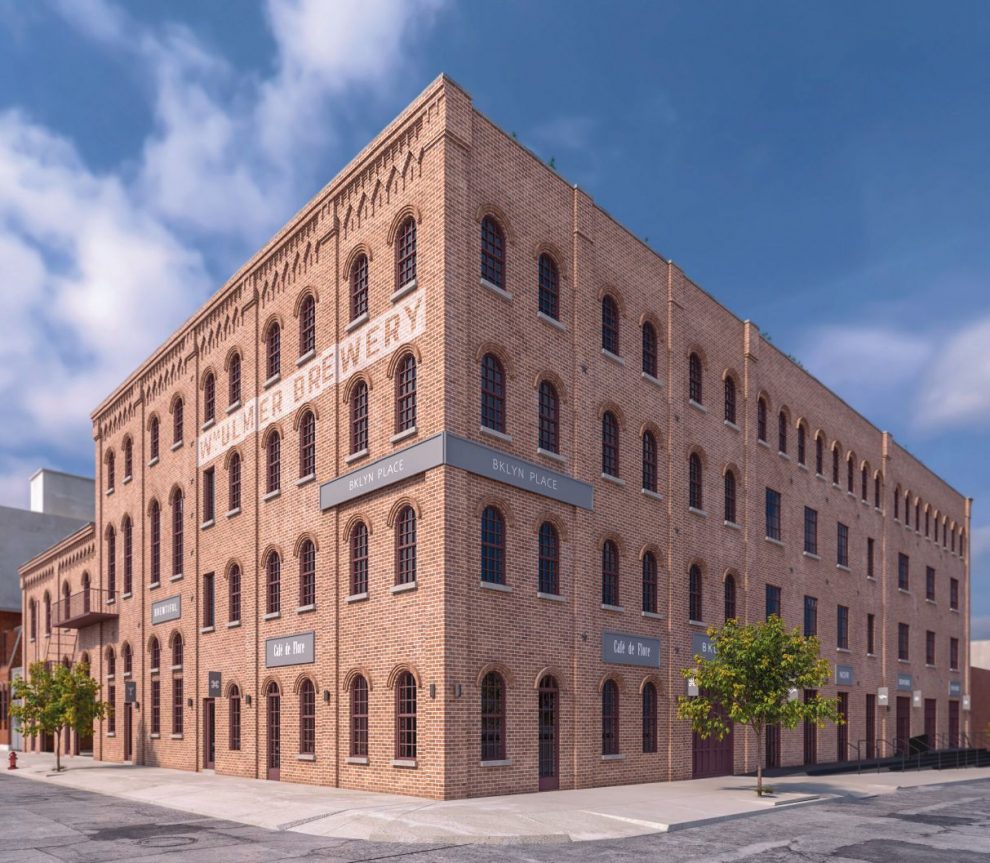 Once a brewery and soon to be a retail/office hub: the adaptive reuse plan for the former William Ulmer Brewery in Bushwick, Brooklyn, was recently and unanimously approved by the New York City Landmarks Preservation Commissioners (LPC). The project, known as Ulmer Arts, will transform an obsolete building into commercial space for new and innovative uses while retaining its historic charm.

The 19th-century brewery featured two buildings: the Main Brew House at 71-83 Beaver Street and the adjoining Engine and Machine House at 35-43 Belvidere Street. The property will be reconfigured into an office and retail complex able to accommodate 10 or more commercial tenants at approximately 60,000 square feet total. The site features four floors above grade and three floors below grade, with ceiling heights of 10 feet to 22 feet.

The renovation plan by DXA studio includes the construction of a red copper-clad penthouse, heritage-painted signage, restoration of the arched entryway, new double-hung windows to match the originals, oversized glass entryways and ground-floor folding windows for a future retail tenant. The façade will be rehabilitated but will not be significantly changed, and the interiors will retain much of the original building fabric, including a patchwork of timber posts and cast iron columns.

“DXA studio has had the good fortune of being charged with reimagining a number of great landmark buildings in New York City, and the William Ulmer Brewery certainly ranks up near the top,” said Jordan Rogove, partner and co-founder of DXA studio, New York City. “We love fostering a dialog between generations through architecture, especially ones with such commonalities as the Brooklyn brewers of the 1870s and the Bushwick makers and craftsmen of the 2020s. It’s a special building, and it will now have an opportunity to be shared and appreciated by a much wider audience.”

The ownership team consists of MacArthur Holdings, Rivington Company and Brightsky Investments. The building is currently slated to begin construction this spring and will open for occupancy in late 2021.