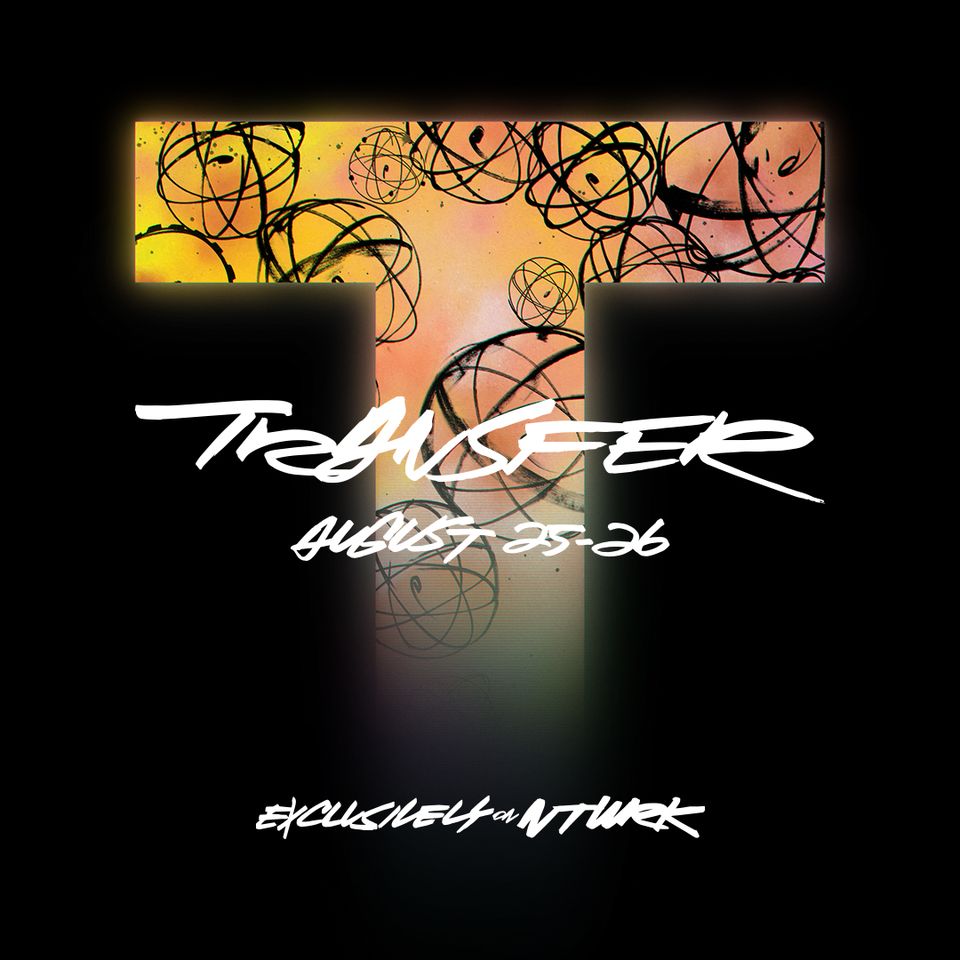 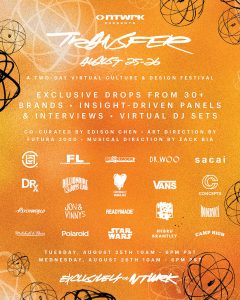 NTWRK announced the launch of the first season of TRANSFER, a two-day virtual festival celebrating culture and design, in conjunction with Edison Chen and his agency 3125c. Iconic artist Futura 2000 will serve as the artistic director for NTWRK’s first TRANSFER festival.The inaugural festival will take place August 25-26, 2020 on NTWRK and feature exclusive drops and experiential content from world-class creators.

Each day will also feature insight-driven panels and interviews, virtual DJ sets, musical performances and more. A portion of the proceeds from the festival will be donated to a charity aiding those affected by COVID-19. Futura 2000’s design studio, Futura Laboratories, will design exclusive merchandise to be sold in the event’s virtual gift shop.

More than 30 brands and artists will be dropping exclusive products on NTWRK across the two-day festival, which is expected to draw 240,000 shoppers and 10 million viewers online. Announced participating brands include: Billionaire Boys Club, VANS, Dr. Woo, Polaroid and more.

“With the world shifting away from physical events,” said NTWRK CEO Aaron Levant, “NTWRK is aligning itself to be at the forefront of these new social commerce and digital experiences like TRANSFER.”

Futura 2000 will shape the event’s visual experience and his commercial product brand and design studio, Futura Laboratories, will design exclusive merchandise to be sold in the event’s virtual gift shop. He will also participate in forums during the festival to provide insight and inspiration to aspiring creatives.

Zack Bia will serve as the event’s musical director and perform multimedia DJ sets each day.

“I am excited to present TRANSFER alongside partner Aaron Levant [NTWRK CEO],” said Edison Chen. “We will work together to curate a menu of moments, objects, and vibes to inspire and touch the many corners and pillars of our culture. Creatives from east and west will be selected to bring memories and excitement to touch all corners of youth culture lifestyle. We are happy to have a mix of the old school and new school with our artistic and musical directors, Futura 2000 and Zach Bia. We promise to bring you drops and content to blow minds.”

TRANSFER will take place August 25th-August 26th on the NTWRK app and twice a year moving forward. We’ve got the early scoop for what to expect here:

Panel #1: New Faces of Leadership
Looking into the future, this panel discusses what it will take to build a diverse fashion industry representative of the audience and consumers they create for. With Heron Preston, designer of the eponymous label Heron Preston; and Sharifa Murdock, co-owner of Liberty Fairs and CEO of Envsnfest; and moderated by Coltrane Curtis, founder and managing partner at Team Epiphany.

Panel #2
Street culture has become a melting pot of voices, ideas, and values from around the globe, increasing the interconnectedness among different populations and cultures.With Edison Chen, founder of Clot; and contemporary artist Futura 2000.

Edison Chen is a Chinese singer, actor, creative director and founder of CLOT Inc., whose headquarters are located in Hong Kong. His countless collaborations with Nike, Sacai, Casio and Levi’s have led the way in developing Asian street culture. His creative agency, 3125c, offers creative remedies that bridge the gap between high and low in the lifestyle culture realm across both eastern and western borders.

Futura 2000 (born Leonard Hilton McGurr) was known as early as the 1970s for his radical approach in the street, introducing abstraction to what was an entirely letter-based discipline. His work on canvas caught attention in the 1980s, establishing him as a leading voice within a wider art movement that included the likes of Jean-Michel Basquiat, Dondi White, Rammellzee, Keith Haring and Kenny Scharf. Entirely self-taught in what he calls “the subway school,” Futura has been likened to Wassily Kandinsky for his mastery of color, geometric composition and line — and is celebrated alongside his friends Dondi White and Rammellzee for his progressiveness and of-the-moment dynamism. His work has been exhibited at notable art institutions such as the Museum of Contemporary Art (MOCA) in Los Angeles, MoMA PS1 in New York, the New Museum in New York, the seminal Fun Gallery, and most recently, the Beyond the Streets exhibitions in Los Angeles (2018) and New York (2019) and in Takashi Murakami’s Kaikai Kiki Gallery in Tokyo.

Panel #3: The Art of The Sneaker Collaboration
Two of the Sneaker industry’s most respected designers discuss the art of sneaker collaborations, the future of customs, and the path forward for future designers. With Don C, founder of the eponymous Just Don; and Deon Point, creative director at Concepts.

Panel #4: Women Who Dew
Streetwear is male-dominated, but there is a slew of badass women working behind the scenes. Mountain Dew hosts a passionate roundtable bringing together some of these badass women to discuss the state of the culture. Mountain Dew will collaborate with one of the women on an exclusive product drop during the panel. With Vashtie, founder of Violette New York; and multidisciplinary designer and creative director,  Lacie Jordan.