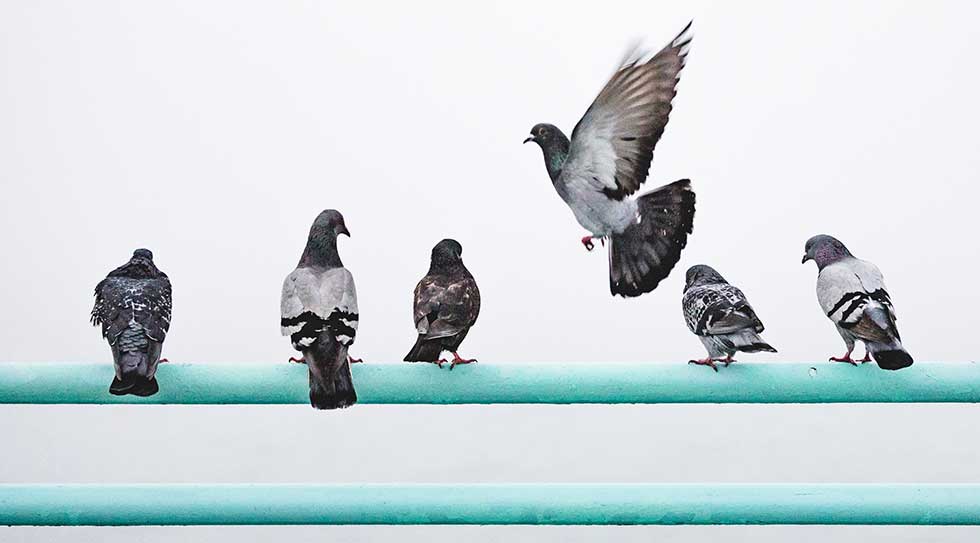 The Problematic Nature of the New York City Pigeon

Often referred to as the “rats of the sky,” pigeons are the bane of any New Yorker’s urban existence. For the most part they’re just a slight inconvenience—they might be in your way on the street, or their waste might dirty a sidewalk. But in a condo/co-op situation, pigeons can quickly go from small nuisance to management nightmare. So this month, we’re presenting you with our go-to guide for dealing with some of New York’s most notorious pests—to keep you from having to learn on the fly.

Among other avian residents, pigeons are some of the most problematic. When a group of pigeons establish a colony in your building, they bring with them a lot of health risks. While it’s unsavory to think about, pigeons’ fecal matter carries numerous diseases, and their continued presence in your building’s nooks and crannies can create a buildup of unwanted waste.

“Pigeons are what we call ‘dirty nesters,’” Rebecca Fyffe, a Chicago-based wildlife educator told The Cooperator. “They speckle their nests with their own droppings, so when they flap their wings and climb around, it forms a dust. All birds carry salmonella in their waste, but it’s particularly common among pigeons, so that’s a really big health concern. Another risk factor is histoplasmosis, a fungal lung disease that can occur in bird roosts. So if birds have lived in an enclosed area, and someone has to go up there to do work, once those spores have had a chance to grow and propagate, they can become infected [from breathing in the airborne particles], even if it’s only a few spores.”

Not to dwell on the disgusting, but the problem worsens if a group of pigeons set up shop near an HVAC intake unit. This can potentially distribute the aforementioned germs into your building’s air. Also, it goes without saying that a building covered in bird droppings doesn’t exactly sell in the current market.

Therefore, it’s best to put prevention measures in place before the pigeon epidemic goes too far. Of course, that’s a bit of a difficult task, as pigeons are some of the most tenacious of their kind. There are also plenty of cozy spots for them to hole up in condo/co-ops, whether it’s the hollowed out side of a building, a rooftop water tank, or large HVAC equipment raised above a roof’s surface. Add animal-loving residents to the mix who throw a few pieces of bread the intruders’ way, and you have a recipe for avian disaster.

“The mere presence of pigeon droppings in the courtyard is an unsanitary condition, and could be grounds for a violation,” Kempshall McAndrew, a lawyer at Anderson Kill, told The New York Times.

Pigeons are not protected under New York law, so managers are allowed to disturb and destroy their nests to ward off the unwanted residents. However, while this may temporarily solve the problem, typically pigeons will return to their roost even after their old nest is destroyed.

Instead, it’s best to alter the existing architecture of your building to make it less pigeon friendly. It doesn’t have to break the bank, either: simply fill in crevices that birds are using to deposit eggs and waste, and go from there. You can even invest in a fake owl or hawk to ward off unwanted pigeons—think like a scarecrow, but for urban condo/co-ops.

Other methods include roosting spikes, metal “bird slides” that create a slippery surface, and thin wires, all of which can aggravate pigeons, causing them to seek out other, more convenient nesting prospects—perhaps with a few more charitable residents attached. And if that’s enough, managers can invest in motion activated sprinklers, or electrical strips that emit a mild charge every few seconds.

The above methods are recommended no-kill ways to keep pigeons out of your property. While pigeons are known as “sky rats” for a reason, it’s also considered largely inhumane to start chopping them up into tiny bits or gassing them with carbon monoxide. Such brutal methods probably won’t win you too many points with your residents, either—no one wants to live under the Jason Voorhees of pigeons.

“We don’t kill them,” added one specialist. “We just chase them out, close up the areas they’re getting into, and let them go find another spot. There are pest control companies that like to use poison corn, but I’m against using poison, because it can kill non-targeted birds. Nobody wants to poison cardinals or blue jays.”

So while their cooing can be disruptive and their fecal matter repulsive, there are plenty of efficient, modern ways to keep pigeons off your property—without ruffling any feathers.