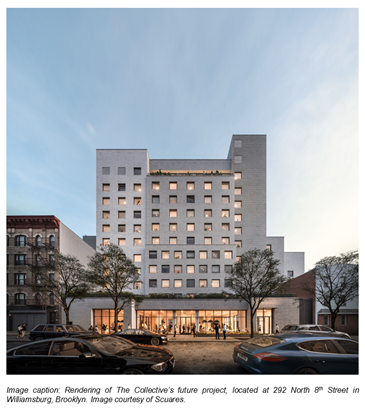 The Collective, the leading global co-living company based in New York, London and Berlin, announced its latest co-living development, 292 North 8th Street (“North 8th”) in central Williamsburg, Brooklyn. The $150M project is The Collective’s sixth acquisition in the United States since establishing its New York arm in 2018, and its fourth in New York City.

The 224-unit building, designed by The Collective, with Stonehill Taylor (architect of record) and One Union Studio (interior design partner for public spaces), will span 100,000 square feet and accommodate a community of 321 members*. In partnership with local universities, 97 rooms are being designed for students with the remaining 127 studios geared for nightly and monthly stays.

“In keeping with The Collective’s mission of fostering cultural exchange, learning and human connection, we believe that North 8th will be the first project of its kind for New York City,” said Reza Merchant, The Collective’s Founder and CEO. “It will bring community of all ages together in one holistic environment, designed to promote an intergenerational exchange of knowledge through shared amenities and dynamic programming.”

All residents of 292 North 8th Street will have access to a beautifully designed student lounge and classroom spaces, street-facing food and beverage options, an outdoor courtyard, a fitness and wellness level with sun terrace, and a program of seminars, lectures and think tanks. In The Collective’s signature style, the general public will also be welcome to take advantage of both the space and its programs.

“It wasn’t until we completed The Collective Old Oak in West London, which houses around 550 people between 18 and 65 years old, that we really saw the power of bringing people together around ideas and experiences in thoughtfully designed communal space,” added Merchant. “We’ve just opened the largest co-living building in the world, The Collective Canary Wharf, which houses 705 members and advances our mission to foster human connection and enable people to lead more fulfilling lives.”

The Collective’s growing, global network of co-living spaces offers thoughtfully designed efficiencies in the private living space to create a surplus of square footage for unique shared amenities and experiences. To date, the company has raised over $1 billion to fund its growth, bringing to life its vision of making co-living an option for people all over the world. In November of this year, it opened The Collective Paper Factory, The Collective’s first U.S. location in Long Island City, Queens, marking the global debut of the company’s short-stay model and the start of an explorative, collaborative cultural program dedicated to housing innovation and community-building in cities.

292 North 8th Street will open alongside The Collective’s two previously announced Brooklyn projects, 555 Broadway and 1215 Fulton Street, in 2022. Also in development by The Collective are 2825 NW Second Avenue in Miami, Florida’s Wynwood District and 633 LaSalle in Chicago, Illinois. This year, the company announced an ambitious plan to launch 100,000 units by 2025, which will service increasingly nomadic global populations with quality, attainably priced and flexible living solutions across the United States, United Kingdom, and Germany, among other locations.

“As we see opportunities to create more spaces that accommodate a breadth of knowledge and perspective in one space, we will continue our robust growth, which we strongly feel will unlock opportunity and growth across communities,” stated Merchant.

Sales Launch at The Benny