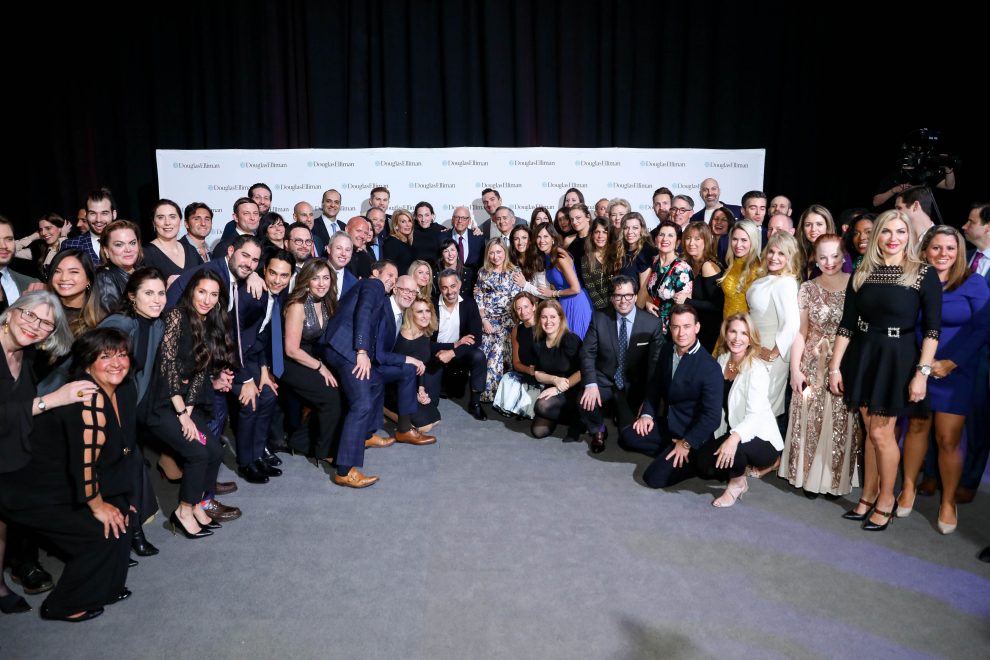 Douglas Elliman Real Estate, the largest brokerage in the New York Metropolitan area and the second-largest independent residential real estate brokerage in the United States by sales volume, celebrated the firm’s world-class agents from around the nation at its annual awards ceremony – The Ellies. Top performers from New York City, including Manhattan and Brooklyn, were among the honorees at this year’s event held at Mohegan Sun in Uncasville, Connecticut.

“Every year, our skilled and talented agents prove their status and reputation as best in class, and 2019 was no exception. We are thrilled to celebrate the extraordinary results of their hard work at the 2020 Ellies,” said Howard M. Lorber, executive chairman, Douglas Elliman Realty, LLC. “As always, Elliman remains committed to providing our agents with the best technological and marketing resources to help them excel, and we know that they will continue this unbridled success in 2020 and beyond.”

Nationwide sales for Douglas Elliman in 2019 totaled $28.7 billion as the company continued its nationwide growth into new markets. The firm was responsible for 44,726 sales and rental transactions, and was ranked the number two brokerage in the nation by sales volume.

“Our agents continue to perform at the top of the market in New York City, and have closed out another incredible year due to their dedication and effort,” said Steven James, President and CEO of Douglas Elliman’s New York City brokerage. “We’re thrilled to celebrate their talents and I look forward to seeing the success and tremendous achievements that 2020 will undoubtedly bring as well.”

MANHATTAN
Earning first place for Top Teams by Gross Commission Income (GCI) in Manhattan was the Alexander Team, led by Oren and Tal Alexander of the 575 Madison Avenue office. Taking home this year’s #1 spot for Top Individuals by GCI was Ann Cutbill Lenane, who is based out of the 1995 Broadway office.

Additional Top Teams by Transactions were The Stanton Hoch Team (#2), The Shemesh Team (#3), The Holly Parker Team (#4) and the Espinal Adler Team (#5).

The Top 5 Individual Agents by Transactions were rounded out by Jessica Levine (#2), Gregory Cooper (#3), Mary Phelan-Kavanagh and Joshua Lieberman (tied #4) and Diane Johnson (#5).

The Mindreau Team and the Steiner-Hernandez Team were named the firm’s Top Rental Team by Transactions in Manhattan by tie. They were followed by The Rothman Team (#2), the Altschuler Bartolucci Team (#3), The Leibowitz Team (#4) and The Zweben Team (#5).

By tie, Janna Raskopf and Keyan Sanai, both of the 575 Madison Avenue office, were named the firm’s Top Rental Individuals by Transactions in Manhattan. They were followed by Andrea Anzaldo (Weksler) (#2), Afik Akyuz (#3), Daniel Cohen and Teresa Solomon Wuest (tied #4) and Nicole Sobol (#5).

Additional awards included DE Title Services for Manhattan, which went to Nazila Jarrahian and The Outgoing Broker to Broker Referral Award, which, by tie, was shared by Michael Lorber and Richard Steinberg.

A Lifetime Achievement Award was presented to Ann Macaluso of Manhattan’s 575 Madison Avenue office for her career-long contributions to the business, and Thomas O’Beirne was named Rookie of the Year for Manhattan.

In Brooklyn, The Scott / Robles Team, led by Aran Scott and Anthony Robles of the 190 Fifth Avenue office, was named Top Team by GCI.  Additional top teams included The Maroni Team (#2), The Mazurek Team (#3), the Altschuler Bartolucci Team (#4) and The Sepulveda Team and The Rebecca Goldberg Team (tied #5).

The Top Team by Transactions in Brooklyn also went to The Scott / Robles Team. They were followed by The Maroni Team (#2), The Rebecca Goldberg Team (#3), The Christopher Howard Team and Altschuler Bartolucci Team (tied #4) and The Mazurek Team and The Tavivian Team (tied #5).

The number one spot for Top Individuals by Transactions in Brooklyn was awarded to Robert Nicoletti of the 187 7th Avenue office, followed by Stephanie O’Brien (#2), Rebekah Carver (#3), Bren Salamon (#4) and Margaret Calarco (#5).

Liqin (Kaylee) Yang, based out of the 156 Montague Street office, took home Elliman’s Rookie of the Year award for Brooklyn.