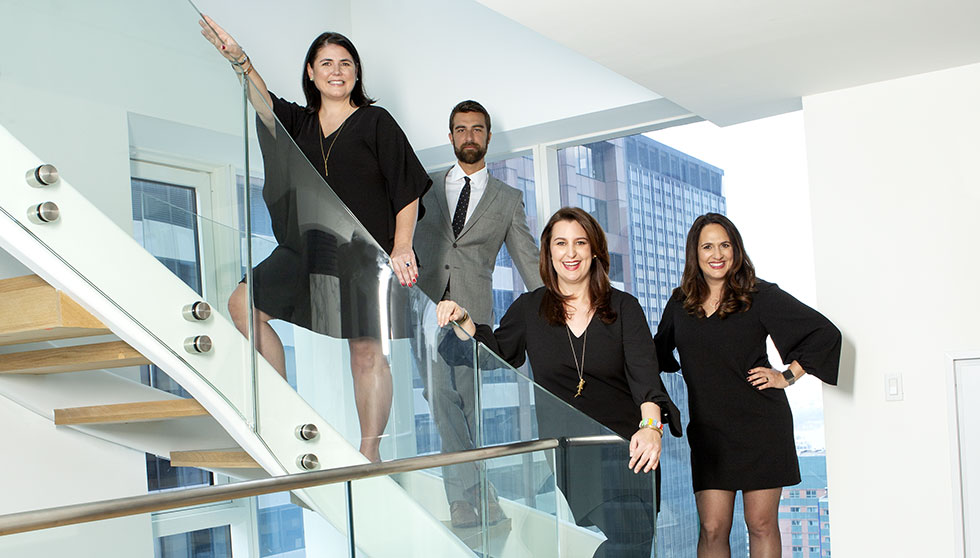 Globetrotting homeowners need global brokers—or at least local brokers with global connections. That need has been the key to success for a group of four Douglas Elliman Real Estate associates who are based on opposite U.S. coasts, but have very similar styles.

Having met through various company events, the quartet discovered they have common work methods, and have created solid friendships and a referral network that helps clients, from first-time buyers to ultraluxury experts, to find homes around the country.

“This is a way to be hyper-local, with a huge range,” said Los Angeles-based Learka Bosnak, who along with LA-based partner Heather T. Roy, New York-based Mary Elizabeth (Mary Beth) Adelson, and Jupiter, FL-based, Matthias Fretz (covering the Palm Beach area) are serving clients with various geographic needs. A conversation with the four is peppered with multiple stories, friendly interruptions, and a lot of laughter.

“We have multiple deals going on back and forth,” Mary Beth said. “Matthias has a deal with Heather and Learka in California. I have a client working with them. And Matthias and I have done a deal together in Palm Beach. We have constant referrals going on.”

“We’re actually writing an offer for one of your clients today,” Learka interjected.

Because the group works in similar ways, clients who worked with one agent on his or her home turf find it easy to work with one of the others. That is increasing as clients look for multiple home bases. Learka, Heather, and Mary Beth work with a number of clients in the entertainment industry, many of whom need to be bicoastal. Many New Yorkers want winter homes in Florida. And all may have children or parents who need homes in any of the three locations.

“A lot of New Yorkers, Floridians, and people from Los Angeles buy in this triangle all the time, so we end up with referrals constantly, especially with clients who are real estate connoisseurs. And people develop relationships with their real estate brokers,” Mary Beth continued. “It’s nice to know that if you can’t be there personally with your client, that they’re being taken care of the same way.”

Each gives information to the colleagues about family needs, likes, and more so that a transition is seamless, and can result in a multi-generational relationship.

“We have the same ethics, standards, and moral compass,” Heather added.

That requires constant communication. But that likely would be happening in any case, as the four have become close friends who socialize and support each other’s charitable efforts. Learka and Heather, a team since 2006, came to the firm when Teles Properties, their previous home, was acquired by Douglas Elliman. The two are so close that they vacation together, and Heather is the godmother to Learka’s daughter. And the connections go further—Learka refers to herself and Mary Beth as “recovering lawyers,” who shortly after meeting, discovered close mutual friends. Astonishingly, Learka’s and Mary Beth’s husbands shared a WeWork space for one day six months before the two met. And it wasn’t long after Matthias joined Elliman that he worked with Mary Beth, who promptly introduced him to Learka and Heather.

“It was all very organic,” Matthais recalled.

“As a result, we as agents were poised to be in those markets. We don’t get a lot of clients who want to be in Los Angeles, New York, and Kansas,” she said. “But we do in LA, New York, and Palm Beach. The way Elliman has allocated its resources have teed us up to find each other and naturally work in the areas our clients are seeking.”

The four regularly meet in person—Elliman hosts functions, including annual meetings, and educational seminars, that bring together agents from around the country.

“That reinforces that we have the same priorities and ideas about client service,” Heather said.

This is possible because of Elliman’s corporate structure as a single corporation, rather than the franchise structure favored by competitors, Matthias noted.

“That is a massive advantage,” Matthias said. “I’ve been with Douglas Elliman for two years. In my previous company, which was franchised, I never met an agent from New Jersey or Los Angeles or San Diego. There was no incentive to go outside your region. And consistency wasn’t really there. We are where our clients are, whether that’s Aspen, Los Angeles, or the Hamptons. It’s definitely a culture of being in one boat.”

But their differences are as important as their similarities.

“That’s why it’s important to have local relationships in other markets,” Mary Beth observed. “As someone based in New York City, I have a strong expertise in navigating the purchase of co-ops. Meanwhile, Heather, Learka, and I recently discussed issues regarding tar pits on properties. I have no knowledge of that. They deal with issues I never deal with in New York.”

Those discussions also are valuable as people relocate, Matthias noted.

“Someone who is selling in New York may be buying in LA or Florida. But it helps if I can scratch the surface of that knowledge and can then tell the client I have colleagues who are experts in that area,” he said. “To have a bit of working knowledge is impactful as we pass that referral on.”

That expertise also extends to international clients through Elliman’s association with London-based Knight Frank, which oversees the global business, and can extend the group’s client base further, they note.

“All four of us have a strong relationship there, so we can let international buyers what’s going on,” Learka said.

While the agents have had clients who’ve worked in two of the three markets, they’re still waiting for the trifecta. New York remains strong, Adelson reports, while Los Angeles continues to set pricing records.

“We have a housing shortage here, so there’s an inventory problem,” Heather said.

The recent tax reform bill has resulted in an increase in luxury buyers, and is pushing the relocation of high earners to South Florida, Matthias said. Clients from the Northeast looking to sell homes they’ve owned for 30 years have tremendous opportunity in the Sunshine State, he said.

“And when they do,” Matthias said, “I know a good broker!”