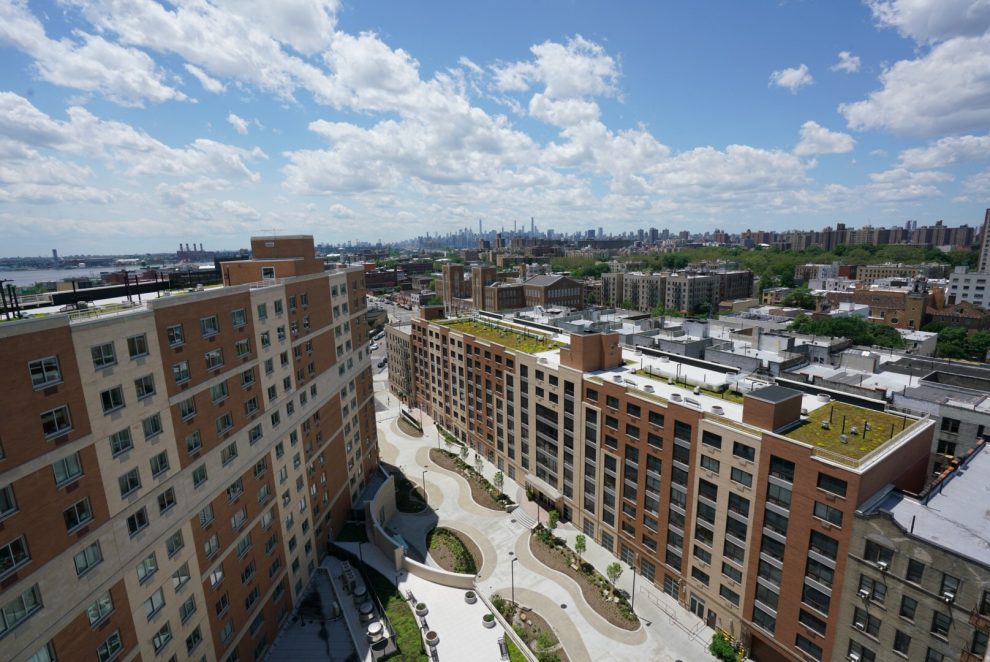 “Today we celebrate the completion of one of the South Bronx’ few remaining large urban renewal sites. Crossroads Plaza has become the anchor for the eastern end of 149th Street, a major retail and transportation strip running across the South Bronx,” said HPD Commissioner Louise Carroll. “In addition to creating nearly 500 new affordable housing units in mixed-use properties, this development has also stimulated other new residential construction on the surrounding blocks. I want to congratulate Douglaston Development and thank all our partners for their tenacity in seeing this decades long development plan through to the end.”

“This event marks the culmination of a multi-phased project built upon the efforts of many partners across the public and private sectors,” said HDC President Eric Enderlin.  “I would like to extend my congratulations to all our partners and the new residents of Crossroads Plaza as we celebrate the addition of 425 affordable homes to the South Bronx. With its creative use of repurposed city land and inclusion of commercial and community space, Crossroads Plaza will ensure the vitality of this neighborhood for years to come.”

“Crossroads Plaza was developed to truly serve the needs of this neighborhood, and we’re proud to have taken a once-vacant site and transformed it into a vibrant hub of quality, affordable apartments, community space and retail space,” said Jeffrey Levine, Chairman of Douglaston Development. “We would like to thank our partners, residents and tenants for the support and growth of Crossroads Plaza’s amazing community.”

The first phase of the three-phase development was completed in 2015 and offers 95 units at 80% of the area median income (AMI) and 31 units at 60% of AMI and below. The building features a 20,000-square-foot community space occupied by a Universal Pre-K currently serving 180 students.

The second phase was completed in 2016 and offers 109 units at 60% of the AMI and 27 units at 40% of AMI and below. The ground floor space is occupied by The New York Foundling, a nonprofit organization dedicated to empowering children and families to live independent, stable and fulfilling lives. The 22,000-square-foot space houses the nonprofit’s case management services, evidence-based and preventive programs, educational support services, and programs for individuals with developmental disabilities.

“For 150 years, The New York Foundling has empowered New Yorkers on their paths to stability, strength, and independence—and we have grown alongside the city we love to reach and meet the needs of every community,” said Bill Baccaglini, President and CEO of The New York Foundling. “Today’s grand opening of Crossroads Plaza builds on that mission, bringing our evidence-based programming to even more families, children and individuals in the Bronx—from crucial preventative services to foster care supports to dynamic programming for New Yorkers with developmental disabilities. We are proud to expand our services in the Bronx at Crossroads Plaza and support our neighbors in this vibrant community.

“Crossroads Plaza stands on land condemned by the City more than 48 years ago and is a great example of how the de Blasio administration is committed to building more affordable housing on city-owned properties,” said Vicki Been, Deputy Mayor of Housing and Economic Development. “It will be an anchor in the Mott Haven East neighborhood, for the families who live there and for the surrounding community, which will benefit from new social and health services, and new retail.”

The total development cost for the Crossroads Plaza project was $160 million. In addition to subsidies provided from HPD and HDC, Crossroads I and III were financed by JP Morgan Chase and Crossroads II was financed by Wells Fargo, which was also a tax credit investor.