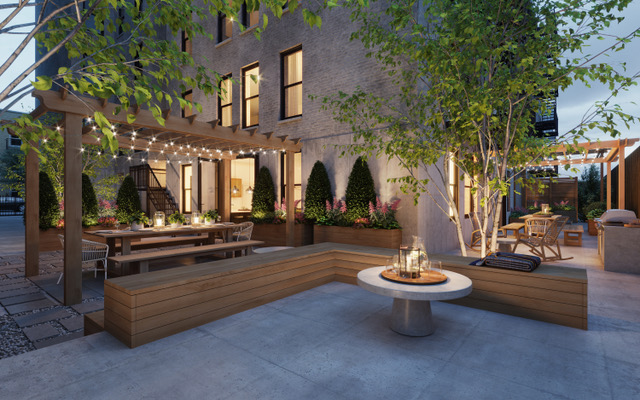 Originally constructed in 1929, the pre-war development was converted into co-op apartments and garnered much attention during the first phase of the project in 2014 when over 2,800 interested buyers streamed through the sales gallery doors in the first few weeks to preview the 57 newly released homes. Now, with the second phase of the project underway, an additional 38 beautifully renovated residences will be offered for sale soon, offering the rare opportunity to purchase a re-imagined pre-war home boasting cutting edge amenities, loft-style floor-plans and a prime location in the heart of Astoria.

“Astoria and surrounding neighborhoods like Jackson Heights and Sunnyside are dominated by these beautiful pre-war buildings that have great bones but unfortunately haven’t been upgraded or amenitized,” said George Michelis, managing principal of RockFarmer Properties. “At Astoria Lights we recognized the opportunity to breathe new life in to a building that already features great layouts and an incredible location by renovating each home with today’s top-of-the-line finishes and appliances and adding the amenities you see in most new construction developments. We are really meeting the market and what today’s buyers are looking for.”

Comprised of four distinct, contiguous buildings, Astoria Lights uniquely fuses its charming pre-war aesthetic with a modern sophistication to create a singular living environment for residents. The development’s storied past can be seen and felt in each building’s textured brick facade, which dates back to when it was first built in the early 20th century.

Located at 24-39, 24-51, 24-65 and 24-75 38th Street in one of Queens’ most sought-after neighborhoods, Astoria Lights’ co-op apartments range from one- to four-bedroom homes and feature a diverse mix of loft-style and classic layouts. Particularly compelling are the redevelopment and combination of existing apartments into grand scale three- and four-bedroom residences, which feature architectural designs and layouts unlike any other in Astoria. More akin to gracious townhomes, a limited selection of large duplex residences are also available. Truly spectacular, while the multi-level homes span the walk in garden and main floor, each remains flooded with natural light as the development’s unique hill-side positioning ensures all floors are above ground. These expansive residences also include a private backyard and recreational space.

“Astoria Lights offers the best of both worlds for buyers looking for a prime location in one of the city’s best and most diverse neighborhoods with great access to transportation that also want a modern, updated home with timeless finishes and design,” said Tom Le of Corcoran, the exclusive marketing and sales agent representing Astoria Lights. “What’s more is that the developer and team chose the kind of renovations and curated amenities that create a community, bringing people together and improving their lives—that is what makes Astoria Lights stand apart.”

Committed to providing buyers with a living experience unlike any other in the City, as well as enhancing the communal aspect of the four-building project, developer RockFarmer Properties opted to expand upon the selection of best-in-class amenities that had been carefully incorporated into Astoria Lights during the first phase of the project. Spread throughout the buildings and located indoors and out, the thoughtfully designed spaces will provide residents at Astoria Lights an even more curated selection of social and entertainment experiences.

Those hoping to capitalize on the increasing trend of working remotely will enjoy a fully outfitted coworking lounge with private conference room. Following a hard day’s work, individuals have the opportunity to stroll over and take refuge in the Resident’s Lounge, perfect for casual hangouts or larger gatherings, while the development’s youngest residents can release pent up energy in a specially curated Kid’s Zone, also located on the ground level and connected via a special playroom passageway. An on-site pet grooming station and large package room round out the new indoor amenity spaces, which also include the previously constructed fitness center, bike room and laundry facility.

Set against the striking New York City skyline, the Sky Deck at Astoria Lights leaves little to be desired. The 1,200-square-foot space offers 360-degree views of Manhattan and Queens and has been artfully sectioned off to enable residents to enjoy a range of activities from a single location. It is also the second communal rooftop area for the project. Those itching to relax and recharge will enjoy the roof-top cabanas and wonderfully landscaped Zen garden, while residents hoping to throw the ultimate summer soiree – there is no better place to view the 4th of July fireworks – need look no further than the Sky Deck. A newly constructed landscaped courtyard offers a third outdoor space for residents and includes a bocce ball court and hammocks grove as well as multiple BBQ stations and communal seating and dining areas.

“RockFarmer is excited about this new phase of construction at Astoria Lights,” said John Petras, managing principal of RockFarmer Properties. “With so many options available, we know that buyers will make their purchasing decisions based on what sets these homes apart from the competition. The amenity package at Astoria Lights stands out from nearly everything in Astoria—and is available at an incredible value compared to “new” buildings in Manhattan, Brooklyn and Queens.”

Located just a 15-minute subway ride from Midtown Manhattan, Astoria has always been one of Queens’ best kept secrets — one of the most desirable living destinations in New York City thanks to its idyllic streets and ever-expanding restaurant scene. Featuring a mix of hot new establishments and storied eateries, the neighborhood has long been beckoning residents from every corner of the City in search of a delectable meal. The popular Astoria Park provides the necessary swath of river-front, green space for city dwellers, as well as jaw-dropping views of Upper Manhattan and the Queensboro and Hellgate bridges. While there is no shortage of stunning pre-war homes in the area, Astoria Lights’ fully renovated homes and extensive amenity programming address a growing demand for expertly-designed residences outfitted with modern day conveniences and services, offered at a great value.