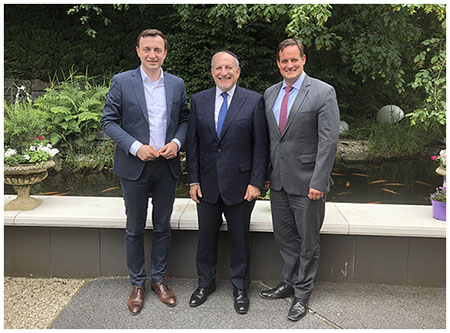 With growing concerns over spiking anti-Semitism in Germany, the Simon Wiesenthal Center has been on the ground, meeting with leading German government officials and calling for action to be taken when anti-Semitic incidents have arisen.

Last week, Rabbi Meyer H. May, Simon Wiesenthal Center Executive Director, met with German parliamentarians to discuss parliamentary support and educational exchange programs for German students at the Wiesenthal Center’s Museum of Tolerance Jerusalem, scheduled to open in 2021. Such visits would educate young Germans about the Jewish people’s 3,500 year relationship to the land of Israel and tackle contemporary anti-Semitism.

During a meeting with General Secretary of the CDU (Conservatives) party, Paul Ziemiak, Rabbi May learned about efforts that the CDU party has taken to combat far-right anti-Semitism, as well as from the political left and right. Rabbi May thanked MP Ziemiak and CDU colleagues for their role in the passage of resolution in the Bundestag defining the BDS movement as anti-Semitic.

In the meantime, senior Center officials including Dr. Efraim Zuroff and Rabbi Abraham Cooper urged German Minister for Culture and Media, Monika Grütters to remove the head of the Jewish Museum in Berlin following a disturbing trend of anti-Semitic and BDS activity at the museum. An “anti-Israel propaganda institution” is what Germany’s leading authority on contemporary anti-Semitism, Henryk M. Broder, called the publicly-funded museum. As protests grew, the director was eventually fired.
Just weeks later, Minister Grütters visited the SWC’s Museum of Tolerance in Los Angeles where she met with Center officials and toured the Museum’s exhibits on the Holocaust, the Tolerancenter, and was briefed about the Museum’s trailblazing Tools for Tolerance professional training programs for law enforcement and educators.

We will keep you updated on new developments as the Wiesenthal Center continues to fight back against anti-Semitism in Germany and around the world.