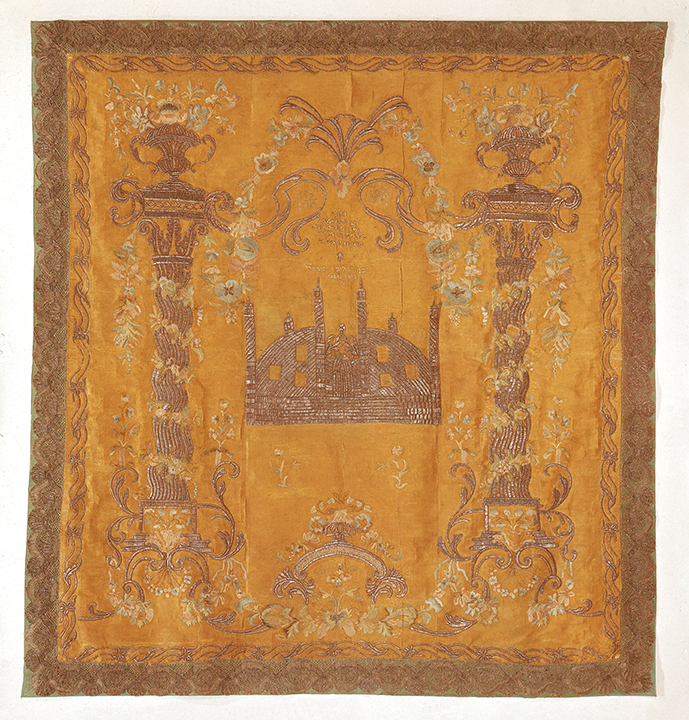 The Jewish Museum will present “Masterpieces and Curiosities: The Benguiat Collection” from September 6, 2019 through July 2020, featuring over 30 works from the Museum’s H. Ephraim and Mordecai Benguiat Family Collection. This collection of 300 examples of decorative and ceremonial art related to Jewish culture is one of the formative groups of the Jewish Museum’s collection. The exhibition includes objects ranging from a newly restored Torah ark curtain from Istanbul (ca. 1735) to an ornately embroidered silk eighteenth-century pillowcase for the Passover Seder from Bulgaria.

One of seven sections that make up the Jewish Museum’s third-floor collection exhibition, Scenes from the Collection, “Masterpieces and Curiosities” offers an in-depth examination of a single object or group of objects within a larger cultural, historical, or aesthetic context. This iteration of “Masterpieces and Curiosities” focuses on Jewish ceremonial objects collected by the Benguiats, a Jewish family of antique dealers from Smyrna (now Izmir, Turkey), who traced their lineage to 11th-century Spain. They travelled extensively, purchasing art and precious objects in Syria, Turkey, Greece, North Africa, Italy, Gibraltar, and the United States.

Foremost in the family was Hadji Ephraim Benguiat (Turkish, ca. 1852-1918). He had a colorful personality, often dressing in robes and a turban to emphasize his origins, even when he moved to the United States. As he traveled, Benguiat created a personal collection of Jewish decorative and ceremonial art, rich in beautiful and important textiles and metalwork from Ottoman lands and Italy, as well as Western and Central Europe. Benguiat brought his collection from Turkey to the United States in the late 1800s. The collection was exhibited at two World’s Fairs (The World’s Columbian Exposition in 1893 in Chicago and the Louisiana Purchase Exposition in 1904 in St. Louis); for a time, it was on loan to the Smithsonian Institution.

Cyrus Adler, a curator and librarian at the Smithsonian Institution, had hoped that the Smithsonian would acquire Benguiat’s collection for its permanent collection; it remained there on loan past Benguiat’s death in 1918, but was not purchased. In 1924, Adler became President of The Jewish Theological Seminary, where he played a key role in the 1925 purchase of the collection by a group of Jewish philanthropists led by Felix Warburg (whose house the Jewish Museum has been located in since 1947).

A highlight of the new exhibition is a just-restored Torah ark curtain from Istanbul (ca. 1735). An unusual feature of this striking and highly decorative silk and embroidered textile is the depiction of Istanbul’s Blue Mosque at its center. There are different theories as to why a piece of Jewish ritual art would contain an image of a mosque, including a suggestion that the curtain originated in a Muslim setting and was later acquired and altered for Jewish ceremonial use; or that the Blue Mosque symbolizes the city of Istanbul the way the Eiffel Tower symbolizes Paris or, the Dome of the Rock might symbolize Jerusalem.

Several objects on view were of particular personal significance to the Benguiat family, providing insights into the family’s history. Many originated in the Ottoman Empire and refer directly to the family’s Sephardic heritage. A velvet Torah mantle from Istanbul (ca. 1881) is dedicated in memory of Rachel Benguiat, Hadji Ephraim Benguiat’s mother. An amulet, written when Hadji was sick as a child, offers a prayer to protect him from the “evil eye,” and contains a hexagram, a magic box, and invocations of names of angels, all of which were believed to have mystical healing powers. Also on view are an Italian Majolica Passover Seder plate and an ornately decorated copper handwashing vessel and laver used by the family for Passover.