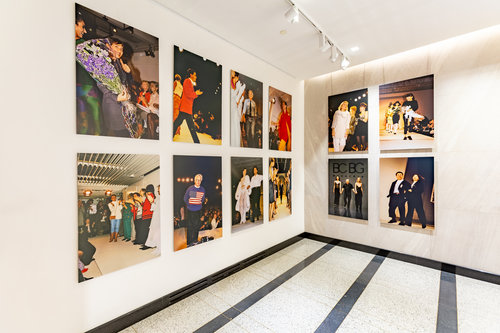 An extraordinary collection of 1980s-1990s fashion slides found on a New York City sidewalk makes its way back to the Fashion District in a new photographic exhibition: “10 Times Square: New York Fashion Rediscovered 1982-1997.” Presented in the lobby gallery at 10 Times Square, also known as 1441 Broadway, former home to some of the most prominent designers in New York, the exhibition features captivating runway images of top fashion designers and supermodels from the 1980s and 1990s. The free public exhibition opened on September 5 to coincide with New York Fashion Week and will run through January 20, 2020.

The collection — a true treasure trove containing thousands of 35mm slides — was shot by Japanese photographer Kishimitsu Hada, and meticulously compiled by his mother, the late fashion journalist Yuriko Tomita. After a fire in Tomita’s apartment in 2008, dozens of boxes housing her professional archives ended up on the sidewalk. In a stroke of good luck, set designer Gaetane Bertol passed by and recognized the value of the contents of the boxes, rescued them, and guarded them until she was able to locate the owner. A decade later, curator and fashion historian Ya’ara Keydar worked to create this exhibit of photographs at ZAZ10TS — a gallery conceived by Tzili Charney in 10 Times Square. Through these fortuitous connections, this exhibition reunites the designers featured in the photographs with their one-time workplace.

“With the new exhibition, fashion comes full circle in returning to the Times Square district,” said Tzilli Charney, founder of the lobby gallery concept presenting art and culture to workers, visitors and the general public on an ongoing basis. “Remnants of fashion past become part of the present, imparting a sense of history and culture in terms of what once was known as the garment district of New York.”

“10 Times Square: New York Fashion Rediscovered 1982-1997” illustrates one of the brightest times in the history of New York fashion. Rapid economic growth in the 1980s ushered in an era of enthusiasm that revolutionized the fashion industry. Designers began creating high-quality day and eveningwear, in a more wearable style. Jeans and sportswear abounded, as well as — for the growing presence of women in the workforce — power-dressing with tailored suits and striking silhouettes. Fashion designers and supermodels achieved celebrity status, and finales became the most anticipated part of any runway show. The exciting and colorful finale celebrations of designers who worked in the building between 1982 and 1997, arm in arm with the leading supermodels of the time, are preserved in the joy-filled photographs in this collection.

The 35mm slide format, a lost medium in photography, allows for the kind of large-scale reproductions that made this exhibition possible. The photographs selected for the exhibition took the interior design of the building into consideration as well, using only photographs that coordinate with the Art Deco black, white, grey and gold color scheme of the marble in the lobby.

“These golden moments evoke a time just before the digital camera, smartphones, live streaming, fast fashion, and the transition from domestic to offshore garment manufacturing,“ said curator Ya’ara Keydar. “Fashion is an ever-changing industry. This exhibition is an invitation to pause and reflect on fashion through spontaneous moments of larger-than-life, unretouched beauty — and absolute fun.”

In addition to the photographs on display, the exhibition will include a specially commissioned artwork by Gaetane Bertol. In keeping with the kismet of the project, the third member of the creative team is Tony Award-winning and world-renowned architect David Rockwell, founder of Rockwell Group. Bertol, a frequent member of David Rockwell’s scenic design team, mentioned the cache of slides and the upcoming exhibit during a casual conversation. She described the parallels between the storyline of Kinky Boots, the Rockwell-designed Broadway show about the revitalization of a shoe factory, and the metamorphosis of 1441 Broadway over the past 90 years and saw a connection to be celebrated. The result is an art installation featuring Rockwell’s original scale model for the Broadway show, where fashion meets theater. The piece is a playful nod to the ever-changing nature of both the Fashion and Theater districts, which 10 Times Square is a nexus of.

Photographs by Kishimitsu Hada from the collection of Yuriko Tomita

For more information about the exhibition, visit here.