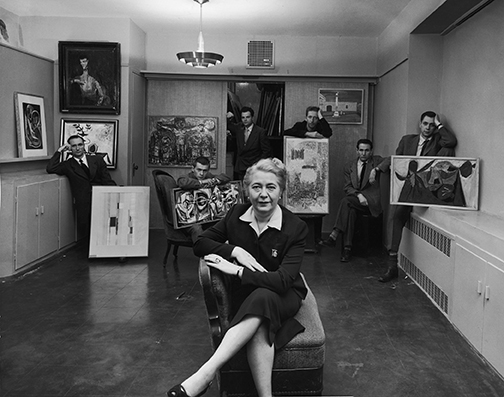 The Jewish Museum will present “Edith Halpert and the Rise of American Art,” the first exhibition to explore the remarkable career of Edith Gregor Halpert (1900-1970), the influential American art dealer and founder of the Downtown Gallery in New York City. A pioneer in the field and the first significant female gallerist in the United States, Halpert propelled American art to the fore at a time when the European avant-garde still enthralled the world. The artists she supported — Stuart Davis, Jacob Lawrence, Georgia O’Keeffe, Yasuo Kuniyoshi, Ben Shahn, and Charles Sheeler key among them — became icons of American modernism. Halpert also brought vital attention to overlooked nineteenth-century American artists, such as William Michael Harnett, Edward Hicks, and Raphaelle Peale, as well as little-known and anonymous folk artists. With her revolutionary program at the Downtown Gallery, her endless energy, and her extraordinary business acumen, Halpert inspired generations of Americans to value the art of their own country, in their own time.

The exhibition, on view at the Jewish Museum from October 18, 2019 through February 9, 2020, will feature 100 works of American modern and folk art, including paintings, sculptures, and prints by artists such as Davis, Lawrence, O’Keeffe, Kuniyoshi, Shahn, and Sheeler, as well as Arthur Dove, Elie Nadelman, Max Weber, and Marguerite and William Zorach, among others, and prime examples of American folk art portraits, weathervanes, and trade signs. Along with major artworks that were exhibited at and sold through the Downtown Gallery, highlights from Halpert’s acclaimed personal collection of both modern and folk art, reassembled for the first time since its landmark sale in 1973, will also be on view.

Born to a Jewish family in Odessa, Russia (now Ukraine), Halpert opened the Downtown Gallery in 1926, at the age of 26, at 113 West 13th Street, the first commercial art space in bohemian Greenwich Village. She deliberately promoted a diverse group of living American artists, fundamentally shifting the public’s opinion of whose voices mattered in the art world. Though an outsider in many respects — as a woman, an immigrant, and a Jew — Halpert was, for over 40 years, the country’s most resolute champion of its creative potential and the defining authority of the American art landscape. Not only did her trailblazing career pave the way for the next generation of women leaders in the art world, Halpert’s inclusive vision continues to inform our understanding of American art today as being pluralistic, generous in its parameters, and infused with idealism.

The Downtown Gallery quickly attracted important clients. Abby Aldrich Rockefeller, founder of The Museum of Modern Art, under Halpert’s tutelage became a key patron to many modern artists and later an enthusiastic collector of American folk art. Halpert became an influential advisor to other art patrons who, like Rockefeller, went on to build new museums or donate major collections of American art to public institutions across the country. Halpert’s circle of collectors included Duncan Phillips, founder of the Phillips Collection in Washington, DC; William H. Lane, the great benefactor of the Museum of Fine Arts, Boston; and Electra Havemeyer Webb, who established the Shelburne Museum in Vermont.

Although she enjoyed these relationships, Halpert never lost sight of her most important clients: everyday men and women who simply loved art and wanted to live with it. Halpert’s influence, her eye, and her passion for American art became a guiding force in the cultural development of America’s heartland. Her mission, as she saw it, was to bring art within reach of average Americans. Her innovative sales tactics, which included affordable pricing and the option to buy on an installment plan, helped make American art accessible to a new class of collector. American art, she believed, belonged to the American people.

Halpert’s socially progressive values were on full display at her gallery. In addition to regularly presenting work by women, immigrants, and Jewish artists, the Downtown Gallery was the first major mainstream art space in New York City to consistently promote the work of African American artists, including Jacob Lawrence and Horace Pippin. When the Japanese American painter Yasuo Kuniyoshi was classified as an enemy alien during World War II, she mounted a defiant exhibition of his paintings in 1942. Later, as McCarthyism swept the nation, Halpert publicly defended her artists, proclaiming, “Works of art are not a dispensable luxury for any nation. We will have communism in art if Congress can control what we paint, and free and individual expression is stifled.” Her insistence that we support free expression and diversity of opinion, and that these are the defining features of American art and culture, has never been more timely or more relevant.