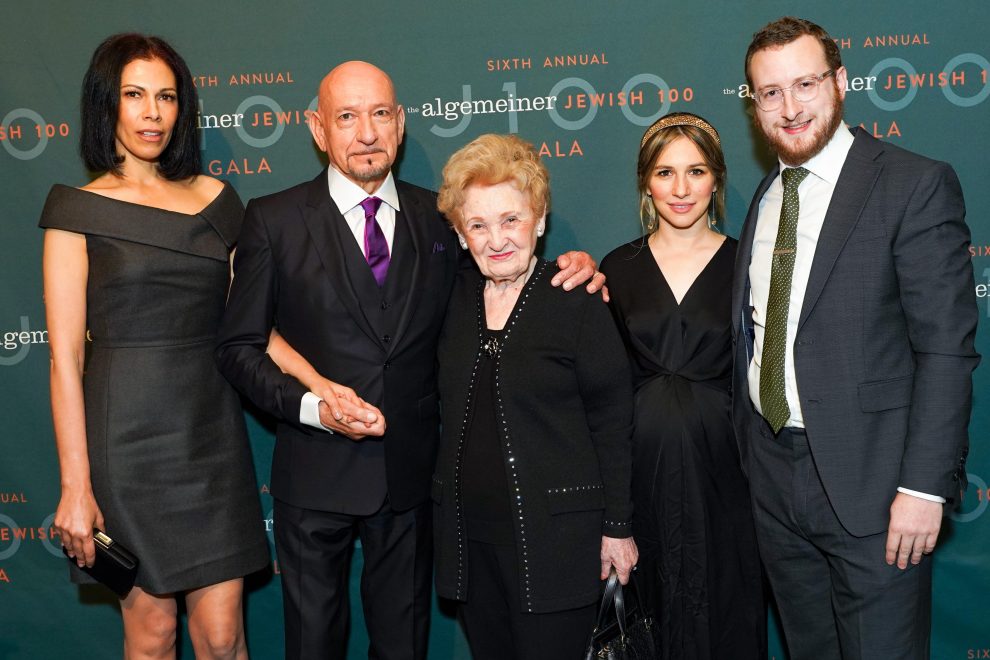 “How does the tragic story of antisemitism end? Who can say? What we do know is that we are called on today to write our chapter in the book,” said Efune. “We are determined that it shall never be said that under our watch the beast of antisemitism reawakened and that it did so unopposed.”

Holocaust survivor Halina Silber, number 16 on Oskar Schindler’s list, presented Kingsley the newspaper’s illustrious Warrior For Truth award. In 1993 Kingsley embodied Itzhak Stern in the movie, Schindler’s List. Kinglsey was welcomed to the stage with a standing ovation. He thanked his wife, Daniela Lavender, in the audience before recalling the many roles he’s acted that draw a spotlight on Judaism and antisemitism.

“When I met with the great Steven Spielberg to discuss playing Itzhak Stern I asked him, ‘What is my narrative function in this role?’ and he said ‘Conscious. Witness.’ As I was filming, I had in my pocket a photograph of Anne Frank and I would say to this beautiful photograph, ‘Dear girl, I’m doing this for you.’ Every day on the set I would say that. Well, dear friends, tonight I can assure you that if given another opportunity to tell your story I can say wholeheartedly, ‘I’m doing this for you.’

Riley’s award was presented by Dr. Sonat Birnecker Hart, President of the World Jewish Congress Diplomatic Corps. The U.K. star, glowing from her pregnancy and joined by her husband Pasha Kovalev, told her story on how just a year ago she thought “antisemitism wasn’t a ‘thing’ anymore.” And now, she says, “It’s probably the biggest honor of my life to be here with you tonight. In the face of hate, there is a moral duty to act. I have a voice and I am going to use it. But I also have a brain too, and I’m going to use everything I have. We must speak out. If we’re quiet, the conversation is by default dominated by extremists. We have to speak with intelligence and not in ways that compound the evil, give it new life and amplify it, or lend it credibility. I’m supporting a bill in the UK Parliament that would make administrators of social media forums, such as Facebook groups, filled not just with hate speech, but also with fake cures for autism that physically harm young children, with material that incites violence against women, against Muslims, indeed against any group they seek to target with their bile, to make them civilly and criminally liable for the content they recklessly allow to be published there. I’ve made a commitment to do one thing above all else. I’ll not cower in the face of hate.”

CEO of Talent Resources, Michael David Heller, was also honored. Kelly Bensimon gave her dear friend the award, saying, “I have seen and developed a great respect for his passionate support for Israel and pride in the Jewish heritage.”