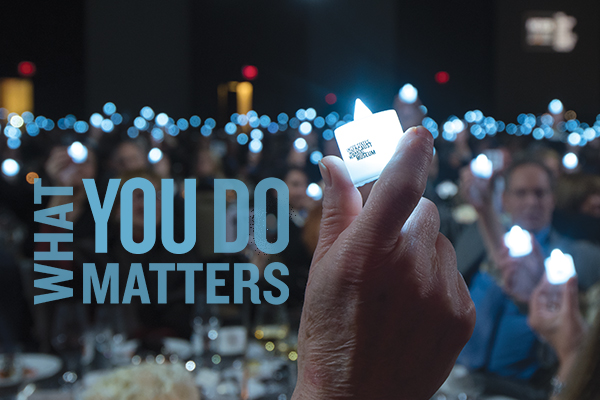 The United States Holocaust Memorial Museum will present National Leadership Awards to Gary Jacob and Stacey Saiontz during its ‘What You Do Matters’ 2019 New York Tribute Dinner. These awards are presented to an outstanding individual(s), foundation, or corporation in recognition of their exceptional contribution to benefit the community in ways that advance the values and mission of the Museum.

Gary Jacob, a prominent New York real estate industry leader who serves as Executive Vice-President of Glenwood Management, has been a key member of the Museum’s New York Real Estate group since 2011.

Stacey Saiontz is the granddaughter of Holocaust survivor Jack Feldman, who was recently featured in the HBO documentary “The Number on Great Grandpa’s Arm” with Stacey’s son, Elliott. Saiontz is also a founding member of the Museum’s New York Next Generation Board.

Sara J. Bloomfield, Museum Director, will be the keynote speaker.

Irene Weiss, a Museum volunteer who survived Auschwitz-Birkenau and forced labor as a teenage girl, will share her story as we approach the 75ty anniversary of the camp’s liberation.

The ‘What You Do Matters’ New York Tribute Dinner is chaired by Debrah Lee Charatan, Jeffrey Feil, Lloyd Goldman, Mindy Nagorsky-Israel and Ronen Israel, and Caryn and Howard Unger.

Guests must RSVP by October 15.