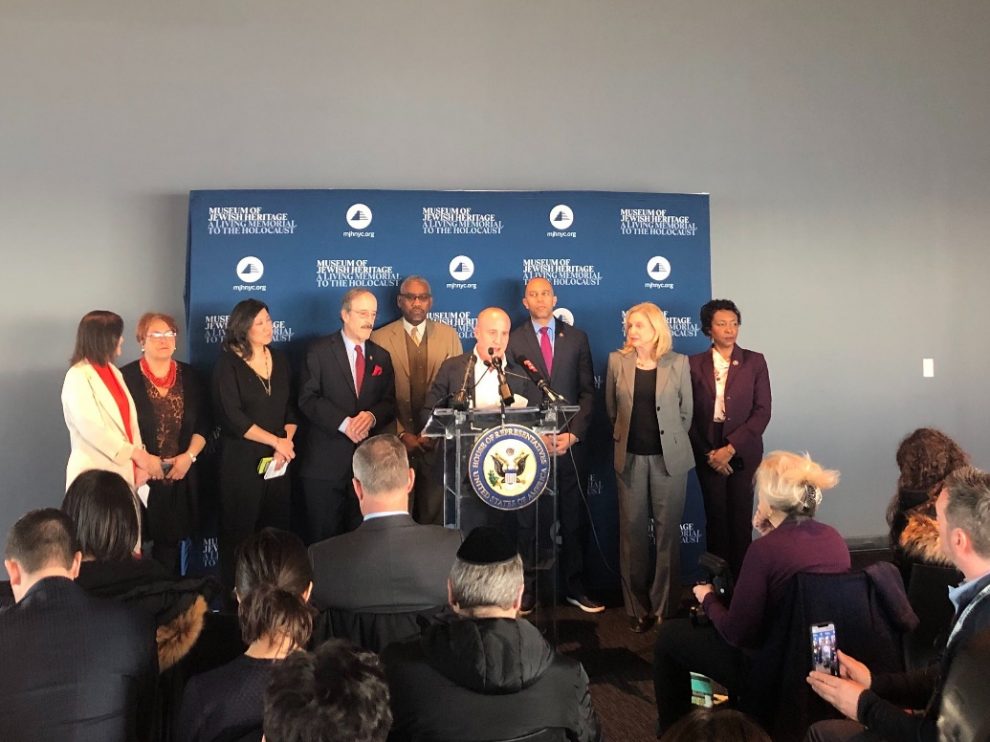 Following a rise in anti-Semitism and attacks on worshippers, U.S. Representatives Max Rose, Jerrold Nadler, Yvette Clarke, Eliot Engel, Hakeem Jeffries, Carolyn Maloney, Nita Lowey, Gregory Meeks, Grace Meng, and Nydia Velázquez announced today that as part of the federal appropriations legislation passed last month, Congress increased funding for the Nonprofit Security Grant Program to $90 million, a 50 percent increase from previous funding levels. The grants provide critical support to help improve security and safety at such vulnerable, high-risk institutions throughout New York including synagogues, mosques, churches, and community centers which have increasingly been targets of terrorism. Additionally, the Representatives will be coordinating efforts to assist those in the community and will host grant workshops throughout New York City in the coming months to help high-risk nonprofit institutions learn about the program and apply for funding.

“We have all been horrified by the anti-Semitic attacks over the past few weeks and the rising trend of terrorist attacks on houses of worship,” the Congressmembers said in a joint statement. “This cannot continue, because everyone should be able to worship and pray in peace. That’s why we fought to increase critical funding for the Nonprofit Grant Security Program by 50 percent to help protect and secure these institutions. Additionally, in the coming months, our offices will be working with organizations throughout New York City and the entire metropolitan area to ensure those in the community have all the federal grant funding, resources, and tools they need at their fingertips. Because we all must work together to not only educate and eradicate hate but to leave no stone unturned in our efforts to ensure safety and security in our communities.”

Today’s press conference at the Museum of Jewish Heritage – A Living Memorial to the Holocaust follows a rising trend of both anti-Semitism and terrorist attacks on religious institutions. Last week, within 24 hours, Jewish worshipers were attacked during a Hanukkah celebration in Monsey, New York and a gunman fired on worshipers at a Texas church. This follows the anti-Semitic mass-shooting in Jersey City and a spate of anti-Semitic attacks on Jews throughout New York City during Hanukkah that are being investigated as hate crimes.

“We thank New York’s Congressional delegation for their swift response of public resources to combat antisemitism,” said Jack Kliger, president and CEO, Museum of Jewish Heritage – A Living Memorial to the Holocaust. “We condemn the recent heinous acts of hate in Monsey and New York City, and our heartfelt support goes out to the people and communities who have been harmed. The Museum remains committed to educating people about the dangers of what hate can do, both through our educational curriculum and our exhibition, Auschwitz. Not long ago. Not far away. With antisemitic violence on the rise, we are profoundly grateful to all those who have demonstrated a desire to learn from the past in order to meet this current moment with the knowledge, courage, and resolve it requires.”

BI hate crime statistics show that incidents in and at religious institutions like synagogues, churches, mosques, and temples increased 34.8% between 2014 and 2018, the last year for which FBI data is available. The Anti-Defamation League’s 2018 Audit of Anti-Semitic Incidents in New York, released earlier this year, showed a 55 percent increase in Anti-Semitic Assaults in 2018, all of which occurred in New York City.