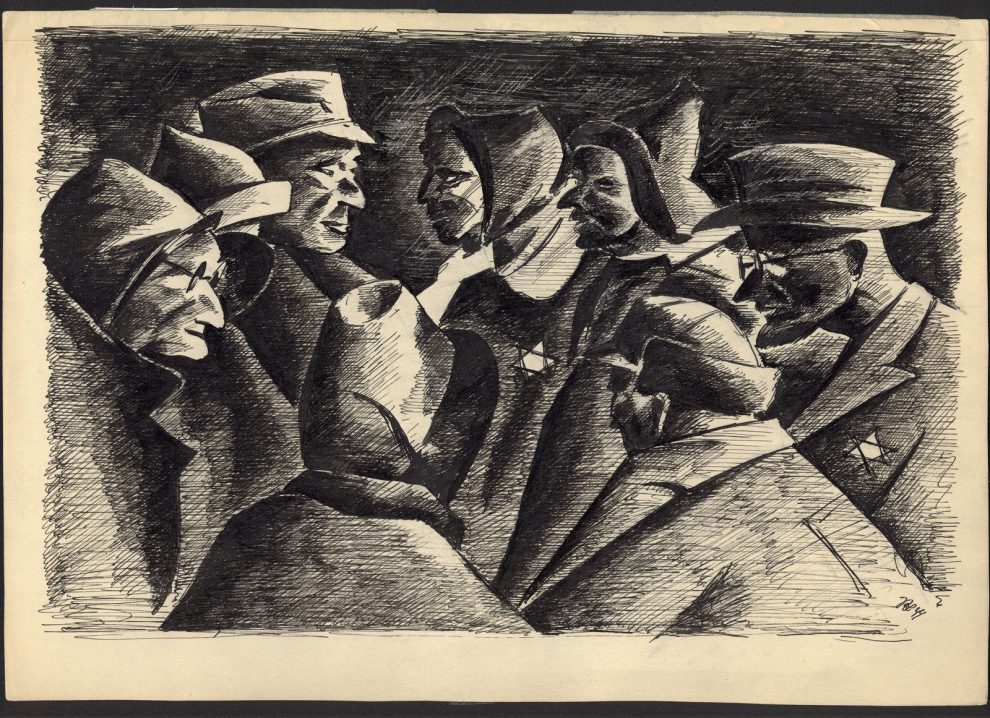 The Museum of Jewish Heritage – A Living Memorial to the Holocaust announced the opening of a special exhibition featuring drawings made during and shortly after the Holocaust by eyewitnesses documenting their experiences. “Rendering Witness: Holocaust-Era Art as Testimony” is curated from the Museum’s collection and features a majority of artworks never presented before. The exhibition will be on display from January 16 to July 5, 2020, at the Museum located in Manhattan’s Battery Park City.

“’Rendering Witness’ is a very special opportunity to see the first-hand experiences of the Holocaust as depicted by individuals who lived through its horrors. The artists, which include a young girl, took great risks to make this art. These were tremendous acts of bravery and resistance. That these fragile works have survived is a testament to the human spirit,” said Jack Kliger, museum president and CEO.

Each artwork reasserts the artist’s humanity and individuality, qualities that are often obscured by the iconic Holocaust photographs taken by the Nazis or their collaborators. The works were produced in Czechoslovakia, Germany, Hungary, and Poland during the Holocaust, primarily in ghettos and a slave labor camp, or immediately after the Holocaust. The artists documented the Holocaust as it unfolded around them, providing a unique personal layer to the visual culture of World War II.

Some of the art depicts iconic scenes of the Holocaust, such as ghetto topographies and deportations, while other works are more introspective and include portraits of fellow prisoners and views from cramped bunks.

All of the drawings in “Rendering Witness: Holocaust-Era Art as Testimony” are in the collection of the Museum of Jewish Heritage – A Living Memorial to the Holocaust. The exhibition includes 21 artworks, 14 of which have never before been on display. The works are primarily on paper, with two on photographic paper, and made with pencil, colored pencils, ink, watercolor, wash, and Conté crayons.

“The art on display in “Rendering Witness” demonstrates that every victim of the Holocaust has a personal story. We see a legacy from people who, under dire circumstances, were able to artistically document the Holocaust in their respective places, which includes the Lodz Ghetto, the Terezin Ghetto, Soemmerda slave labor camp, or immediately after the war,” said Michael Morris, who curated the exhibition.

The exhibition includes works by two well-known artists, Helga Weissova and Alfred Kantor. Three other artists featured – Jo Spier, Alfred Lakos, and Vincent Brauner – all had careers before the Holocaust.

Eleven of the 21 artworks were made by people interned in Terezin. Some of these works were created by professional artists who were assigned to the Technical Department (which made plans and drawings of Terezin for official use) or the Workshop for Arts and Crafts and Utility Painting. This gave them access to art supplies. Peter Loewenstein was a trained engineer; Johann Eisler studied art before the war; and Jo Spier was a well-known cartoonist and illustrator.

Helga Weissova, who is now in her 90s and lives in Prague, was sent to Terezin at age 12. A budding artist, she brought art supplies with her, and these lasted the time of her internment. Weissova was able to smuggle a drawing to her father Otto, who was housed in a different barrack. He advised her, “Draw what you see.” Weissova followed this advice and produced more than 100 drawings.

A prisoner in Terezin, Martha von Peci worked as a housekeeper in Barracks L 126 and L 128 and collected art, poems, and inscriptions in a book from fellow prisoners housed within. This book is on display.

Among the other works on view is a drawing by an unknown artist that shows when the Nazis deported over 15,000 Jews who were children, elderly, or sick from the Lodz Ghetto to Chelmno death camp in September 1942.

Drawings by Marvin Hayle are outliers in “Rendering Witness.” Hayle was a member of the 104th Infantry Division in the United States Army, which arrived at Nordhausen concentration camp in 1945 to find few prisoners and thousands of corpses. Shocked by what he saw, Hayle immediately began to draw.

One of the many compelling attributes of these works on paper is that they even endured. “Rendering Witness” features a mixture of works by people who survived and people who perished during the Holocaust.