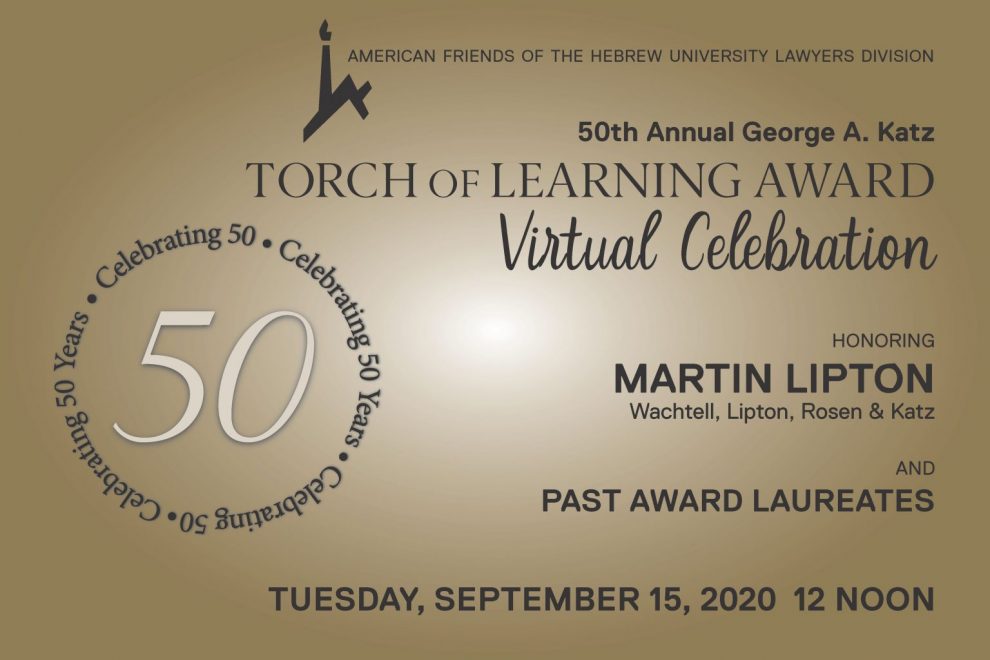 The Northeast Region of American Friends of the Hebrew University (AFHU) announced it will honor Martin Lipton, a leading member of New York’s legal community on Tuesday, September 15,  at noon in a one-hour, online event. Mr. Lipton will receive the George A. Katz Torch of Learning Award in recognition of his professional achievements and civic and Jewish communal leadership. Celebrating its 50th year, the distinguished award commemorates the late George A. Katz, co-founder of Wachtell, Lipton, Rosen & Katz, and a philanthropic leader dedicated to the Hebrew University of Jerusalem and the mission of AFHU.

“We are delighted and proud to honor Martin Lipton, a talented and respected lawyer, well-known known for his ability and probity,” Pamela N. Emmerich, president of AFHU’s Northeast Regional board, said. “AFHU values Martin’s commitment to the Hebrew University of Jerusalem, particularly his dedication to justice and the rule of law through his support of the Hebrew University School of Law.”

The event’s keynote speaker will be Ambassador Dennis Ross. Amb. Ross is counselor and William Davidson Distinguished Fellow at the Washington Institute for Near East Policy. He is also a professor at Georgetown University, teaching courses on US foreign policy, statecraft, and the Middle East. For more than twelve years, Amb. Ross played a leading role in shaping U.S. involvement in the Middle East peace process.

Prior to his service as special Middle East coordinator under President Clinton, Amb. Ross served as director of the State Department’s Policy Planning Staff in the first Bush administration, where he played a prominent role in U.S. policy towards the former Soviet Union, the unification of Germany and its integration into NATO, arms control negotiations, and the 1991 Gulf War coalition.. Amb. Ross is the author of five books on the peace process, the Middle East, and international relations, most recently Be Strong and of Good Courage: How Israel’s Most Important Leaders Shaped Its Destiny (PublicAffairs, 2019), written with his colleague David Makovsky.

The event’s feature speaker will be Hebrew University of Jerusalem President, Professor Asher Cohen. Throughout his distinguished career, Professor Cohen has fulfilled numerous leadership roles in academia, including as head of the Association of University Professors in Israel.

A Hebrew University alumnus, Professor Cohen received a B.A. in Economics and an M.A. in Psychology, after which he conducted doctoral and post-doctoral studies at the University of Oregon. A specialist in the field of cognitive science, Prof. Cohen served as a senior lecturer at Indiana University before returning to the Hebrew University’s Department of Psychology in the early 1990s, serving as head of the department from 2008 to 2012 and later serving as the university’s rector.

Proceeds from the event will benefit American Friends of the Hebrew University and the Hebrew University Faculty of Law. For a list of Award laureates and further details, please visit https://www.afhu.org/event/50th-annual-george-a-katz-torch-of-learning-award-luncheon/. For more information and wire transfer instructions, please contact Maura Milles at 212.607.8519 or mmilles@afhu.org.