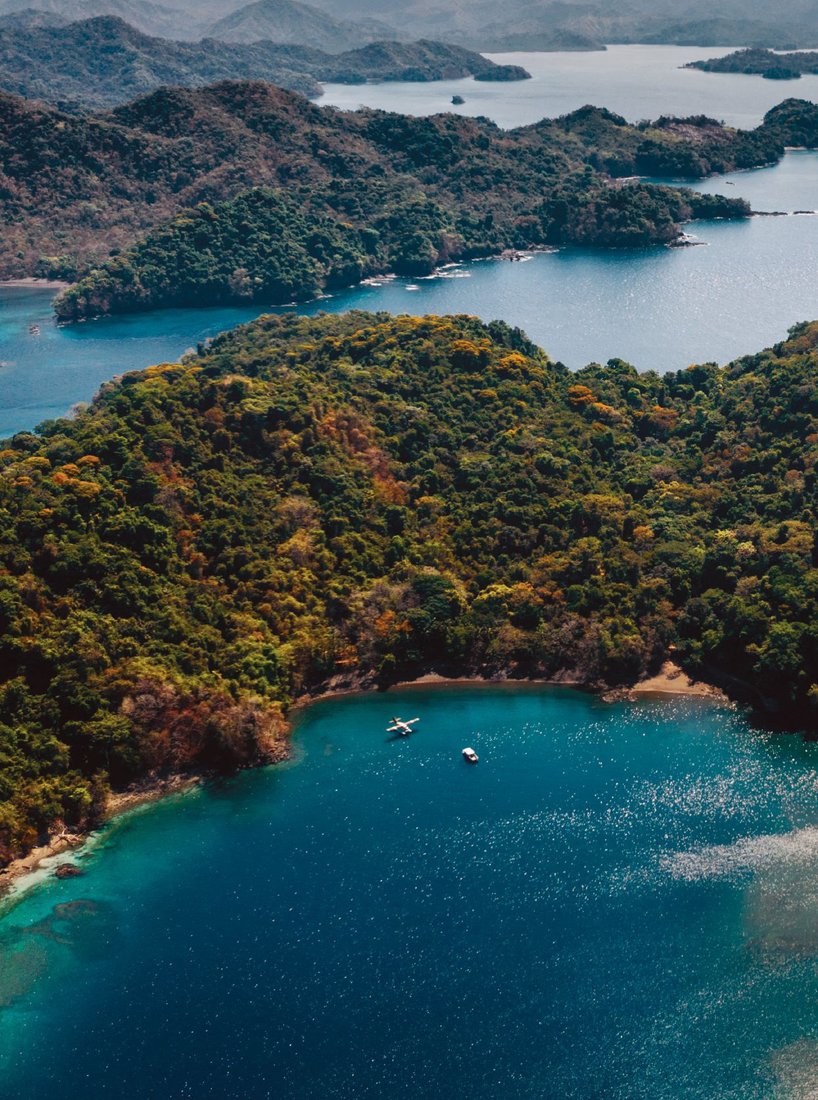 Islas Secas, reimagined: a celebration of conservation, Panamanian culture and simple, elegant adventure hospitality. And, for the 18 guests that the 14-island archipelago can house, roughly 38 miles away from everyone else. The antithesis of mass tourism, the remote eco-resort in the Gulf of Chiriquí — also known as The Lost Coast of the Republic of Panama — only has 25% of the archipelago developed. Islas Secas celebrates sustainable tourism, combining natural wonders with luxurious vantage points.

EXPLORATION WITHOUT EXPLOITATION
Set off the grid, 33 nautical miles from the nearest town, Islas Secas is currently home to four individually designed “Casita” sites, sleeping up to a total of just 18 guests on one of the islands. Each casita is built to feel like a private sanctuary, embraced by the island’s lush tropical forest and offering awe-inspiring ocean views, complete with an individual outdoor deck, plunge pool and thatched-roof cabana.

Owned by philanthropic billionaire Louis Bacon, Islas Secas has strong eco-reserve credentials and is powered by and in harmony with its surrounding environment.

“After spending time experiencing the area’s incredible nature and rich culture, Bacon’s vision for Islas Secas emerged as a model for sustainable tourism that expands appreciation for protecting natural resources, promoting cultural integrity, and embracing more sustainable lifestyles,” saidjim Matlock, operations director and long-time steward of the islands. “His goal of reconciling the complex economic, recreational and environmental interests of the Gulf of Chiriqui resulted in a resort community limited in scale, governed by environmentally sound management practices, and supportive of the local economy.”

In fact, under an agreement with the Panamanian government, approximately 75% of the archipelago will remain undeveloped; nothing can be touched without government approval, Matlock explained.

“Sustainability, responsible stewardship and commitment to conservation are the driving forces at Islas Secas, from the resort’s construction and daily operation down to the smallest details, such as using beeswax wrap instead of plastic wrap,” he continued. “100% of guest water use is captured and reclaimed through a system that includes constructed wetlands, sand filtration system and infrared light process to provide surface irrigation and reduce any impact on the groundwater supply.”

UNDER THE SEA
Islas Secas is home to over 750 species of fish and 128 species of plants with a diverse ecosystem. Snorkelers and divers: prepare to get up close and personal with the likes of parrotfish, eagle rays and, perhaps, the critically endangered Green Olive Ridley or Loggerhead sea turtle.

During different seasons, Islas Secas is witness to the migration of two separate humpback whale populations: one from the Northern Hemisphere and another from as far south as Chile and Antarctica. A short boat ride away is Coiba National Marine Park, a UNESCO-designated protected marine area home to the second-largest coral reef in the Eastern Tropical Pacific.

In case flora and fauna weren’t exciting enough, Isla Coiba — the largest of the 38 islands — is the site of a former prison. As in, it was a penal colony ruled under the dictatorships of Omar Torrijos and Manuel Noriega, home to 3,000 political prisoners, fittingly known as “Los Desaparecidos,” subjected to the whims of tyrants.

However, the isolation of the penal colony preserved the island’s pristine habitat. Over three-quarters is still covered by ancient forest, offering hikers in search of a glimpse of the rare subspecies of animals endemic to Coiba Panama alone — including the Coiba Howler Monkey and Coiba Spinetail bird — that may or may not be a Darwinian result of the prison’s spooky seclusion.

Alicia Ibanez, a pre-eminent biologist working in the Gulf of Chiriqui, noted that Islas Secas “is an area of refuge for species of flora of the Central American Pacific region, which have disappeared from many neighboring regions, possibly due to the intense human exploitation.”

LUXURY, REIMAGINED
All communal areas, existing Casitas and the Terraza, the heart of Islas Secas, have been redesigned and elevated with a stunning, bohemian luxury feel, keeping comfort at its center. Plus, there’s a brand-new Tented Spa immersed in the islands’ tropical forest. South African-based LIFE Interiors & Architecture contributed to the resort’s new look, having garnered international acclaim for the firm’s multi-award-winning work in luxury resorts, boutique hotels and exclusive projects in both far-flung exotic destinations and urban centers.

In addition, three Tented Casitas were completed in March. This accommodation truly invites nature in, with canvas canopied roofs and louvered natural wooden doors. A four-poster bed will look out onto the spectacular jungle landscape, accompanied by a large outdoor hammock and lounge area on an expansive wooden deck for stargazing. The outdoor ensuite bathroom will be a true highlight, protected by the shade of an external canopy, bamboo privacy divisions and a deep-soaking outdoor bathtub that is reminiscent of the color of a coconut shell. The color palette throughout will be made up of soothing creams — hints of ochre and calming pale greens — to complement the island’s scenic, verdant surroundings.

RAW BEAUTY
Islas Secas has a natural energy, making the resort the natural springboard for a holistic wellness experience. In line with its rugged, wild setting, The Spa at Islas Secas celebrates the islands’ time-stood-still appeal, where authentic simplicity becomes the ultimate indulgence: subtle luxury in an elemental environment. The spa has two luxury couples’ treatment tents with a calming cream aesthetic and flashes of Panamanian color. Set within lushjungle foliage that creates a sense of seclusion and serenity, the spa is at the center of the resort, evoking the feeling of being in an ethereal secret garden. The tents are open to the elements and immersed in the jungle, inviting its visitors for a truly tropical, restorative and grounding wellness experience.

With strong eco-reserve credentials, Islas Secas is powered by and in harmony with its surrounding environment. The property’s energy is solar-generated, food waste is recycled, wastewater is re-used for irrigation, and three-quarters of the archipelago has been left untouched and undeveloped by the human hand. A sincere commitment to sustainability is at the core of Islas Secas’s ethos, infrastructure, operation and heritage every day.

“We intend to establish Islas Secas as a world-class and leading example of luxury eco-tourism by developing and deepening partnerships with the local community and conservation groups, governments, larger non-profits, and other stakeholders that will help accomplish our sustainable vision, while continuing to provide an outstanding and unforgettable guest experience,” Matlock said. “Islas Secas is a proud to be part of the exciting growth of Panama as a world-class destination, while we share a global concern with the protection of stunning and critical natural resources.”