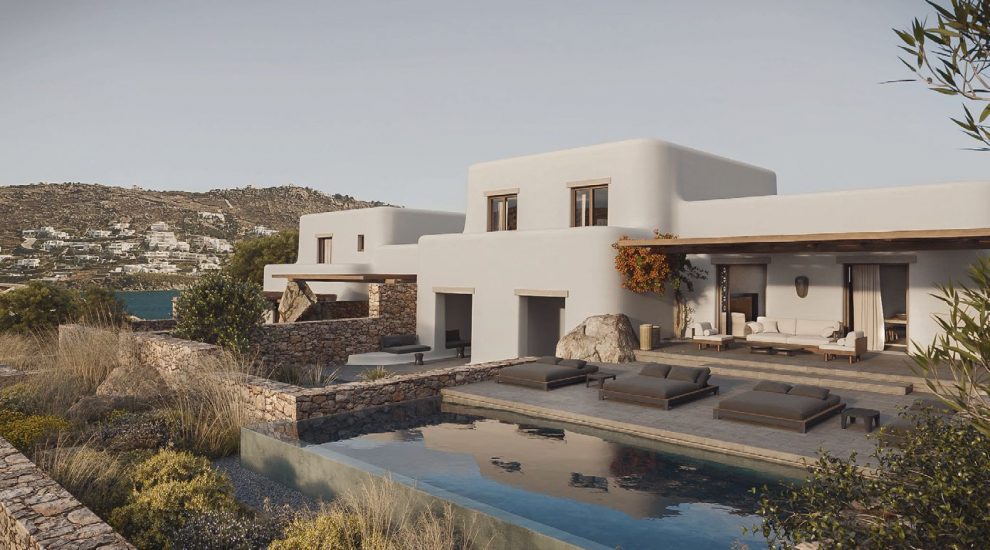 Once home to Greek Gods and a favorite destination of Jacqueline Kennedy Onassis as well as artists, poets, designers and actors, Mykonos has long been in the spotlight. But the whole story of the island is rarely told.

With 25 suites and two villas, the hotel’s set open this summer to introduce a luxury experience that balances fun and privacy with insider knowledge of off-the-beaten-path sites.

The seasoned trio behind the project — who also established Athens hotspots Sea Spice, Pere and Ubu — are all local to the island, and the resort shares a modern expression of Mykonian traditions. Translating to “invite” or “calling,” Kalesma welcomes guests to become a part of the island’s community.

“I’ve spent summers on Mykonos since childhood and look forward to introducing our guests another side of the island — from the classic Mykonian hospitality to special places and activities not in the guide books,” said Aby Saltiel, one of the owners. “At Kalesma, guests will wake up to the sunrise over Ornos bay, smell freshly baking bread and kick off the night watching the sunset over Delos. There’s nothing like it on Mykonos.”

DISCOVER
Set on a hilltop above Ornos Bay and just under two miles from Mykonos town, Kalesma’s accommodations spread across five acres, set against a lush hillside blanketed with 20,000 plants. All rooms will offer unobstructed lookouts from the private patio, as well as a full-sized personal heated pool. Suite rates begin at £1,200 and villas at £3,500 per night.

At 680 square feet, the suites accommodate up to three adults, or two adults and two children. Each will feature private 970-square-foot terraces. Kalesma’s two- and three-bedroom villas can be rented together to sleep larger groups. At 2,600 square feet each, both villas will have an open-plan living room with separate dining areas, a fully equipped kitchen with a pre-stocked refrigerator, wine fridge and private chef available upon request. Additional amenities will include a private gym and 24/7 butler service. Guests can also book in-room spa treatments, and a full spa will open in 2021.

“There is nothing like it on Mykonos.” — Aby Saltie

DINING
For a truly unique vantage point, guests can venture up to Pere Ubu, the Greek restaurant at the property’s peak. Steps from the hotel’s infinity pool, Pere Ubu shines with its panoramic perspectives of the sea, offering guests the rare opportunity to catch both the sunrise and sunset from the same spot. Serving small plates, light lunches and dinner, the restaurant embodies Kalesma’s community ethos with nightly sunset celebrations, evening DJ entertainment and weekly culinary events, like intimate dinners exclusively for Kalesma’s guests. All are encouraged to partake in the lighthearted island lifestyle over a shared meal — and plenty of wine — before sleeping soundly just down the hill.

DESIGN
Kalesma has been brought to life by Athens-based K-Studio, the architect behind the new Mykonos Airport (set to open 2021), with interiors by Greek designer Vangelis Bonios. Rooms will feature original artwork by Serbian artist Aleksandar Vac, whose ceramics evoke traditional Cycladic minimalistic forms. The lobby will take on an effortlessly cool look with furniture by Rick Owens, making Kalesma the only hotel in the world to have pieces by the celebrated designer.

Kalesma’s design is inspired by Mykonian tradition, local history and the “aloni” — an existing threshing floor on the property that became the source of inspiration for the style and character of the project. Local materials and artisans have played an essential role in the identity of the resort, with wood, marble, stone and osier, giving a contemporary look to traditional Cycladic style. Cool earth tones like taupe, gray, dark brown and charcoal blend together with white-washed surfaces to give a strong sense of place and to allow the brilliant blue of the Aegean Sea to stand out.

DESTINATION
Surely a place to see and be seen, Mykonos is so much more than its nightlife. Known as the Island of the Winds, Mykonos was the birthplace of Aeolus — appropriately, the wind god. His gusts pushed Odysseus toward home, only to have him return when a shipmate opened a bag that contained a fierce breeze that drove him back. Aeolus’s cave is located just below the Armenistis Lighthouse. Guests of Kalesma are invited to explore the island’s history, including its much-photographed windmills that date back to the 16th century — now ornamental, they were once essential to the island’s economy.

Of course, Mykonos isn’t all culture and no fun (for those of you who don’t find culture fun, that is). Greece is famous for its carefree vibes — what form that takes is up to the vacationer. Kalesma’s beach concierge can reserve sun-beds in advance at different beach clubs, providing recommendations based on the desired mood — bathers can opt to be completely secluded, to party, to enjoy family time or to partake in water sports.