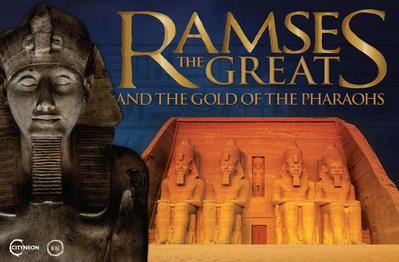 Ramses the Great, considered one of the most celebrated builders of Egypt and a visionary pharaoh who has expanded borders, brokered the world’s first peace treaty, and became a symbol of achievement to which all who followed would measure themselves.  Cityneon, in partnership with World Heritage Exhibitions, Houston Museum of Natural Science, and the Supreme Council of Antiquities of the Arab Republic of Egypt has announced a brand-new, state-of-the-art museum experience exploring the life of Ramses. The 10-city global tour of Ramses the Great and the Gold of the Pharaohs is set to open November 20, 2021 in its world premiere engagement at Houston Museum of Natural Science.

“We are thrilled to bring this exquisite collection to the world,” said Ron Tan, Executive Chairman & Group Chief executive officer of Cityneon Holdings, the brain trust behind the exhibition. “Our partners at World Heritage Exhibitions have perfectly captured our vision to highlight the vast impact of Ramses on the historical development of Egypt. This exhibition will be unlike anything you’ve ever seen. Visitors will not only walk among priceless relics of the great pharaoh but also experience the sights and sounds of the time through a cutting-edge virtual reality experience. This spectacular exhibition will feature 181 rare Egyptian artifacts; the most impressive collection of artifacts on Ramses II to ever leave Egypt. We are honored to have the opportunity to unveil these rare treasures at such an esteemed institution as the Houston Museum of Natural Science. We are eager for the museum-goers across Texas and the world to immerse themselves in this tremendous time in history.”

As visitors walk among real colossal statues, they will explore many of the world’s most treasured riches and discover significant stories about Ramses and life in Egypt, including Ramses’ military victories. The exhibition showcases a dynamic, multimedia re-creation of Ramses’ triumph at the Battle of Kadesh, perhaps the largest chariot battle ever fought. Guests will uncover a preserved collection of artifacts, including sarcophagi, animal mummies, magnificent jewelry, spectacular royal masks, exquisite amulets, and ornate golden treasures of the tomb, showcasing the superb workmanship of Egyptian artists.

“Cityneon continues to bring world-class experiences to folks across the globe, and we are proud to partner with them once again to bring Ramses the Great and the Gold of the Pharaohs to market. This is an unprecedented exhibition that museum patrons near and far are not going to want to miss.”

A once-in-a-lifetime experience, Ramses the Great and the Gold of the Pharaohs is set to the stage of remarkable Egyptian landmarks through never-before-seen drone footage acquired with unprecedented access to many of Egypt’s most iconic locations. Guests begin their expedition through a 120-degree curved HD projection screen, providing a dramatic panoramic view of Egypt and unique insight into the life of Ramses the Great, also known as Ramses II. After viewing the entry video, visitors will be immersed in surround-sound audio choreographed with programmed lighting. They will further explore the life of Ramses and the 19th Century surprise discovery of his mummified remains.

Ramses’ tomb was ransacked by robbers and the world believed his mummy and treasures were lost forever. But the legend of the great pharaoh only increased over the centuries. At the exhibition, visitors will explore the dramatic 1881 re-discovery of a mummy cache in a hidden tomb, where Ramses was found among long-lost royal mummies.

“It is vital that Egypt share our historic treasures in exhibitions such as this” remarked Egypt’s Secretary-General of the Supreme Council of Antiquities, Dr. Mostafa Waziri, who was on-site in Houston for the announcement. “Beyond the benefit of generating funding to protect and restore these artifacts, they additionally act as Egypt’s ambassadors to the world. Houston Museum of Natural Science is the perfect setting to introduce this all-new exhibition. Not only is this museum a world-class institution, but Ramses the Great and the Gold of the Pharaohs further augments the beautiful collection of Egyptian artifacts already on display at the institution. Guests who have enjoyed the facility’s Hall of Egyptover the years will now have the chance to expand their curiosity with a brand-new exhibition centered on one of Egypt’s most notorious rulers in Ramses the Great.”

“Ramses II is considered to be the greatest king to ever rule Egypt” championed former Egyptian Minister of Antiquities and notable Egyptian archaeologist Dr. Zahi Hawass.  “Many of the structures and artifacts that we’ve used to trace the history of Egypt were created as a result of Ramses the Great. This exhibition will illuminate the pivotal moments that earned the great pharaoh his place in history while bringing visitors face-to-face with beautiful Egyptian artifacts.”

The exhibition will also feature an immersive virtual reality experience depicted in a whirlwind tour of arguably Ramses’ most impressive monuments, the temples of Abu Simbel and Nefertari’s Tomb. The experience is led by the ghostly incarnation of Ramses’ illustrious wife, Nefertari, as she attempts to make it back to the afterlife and her husband. Along the way, Nefertari will share how Ramses transformed Egypt as a general, architect, and custodian of the ancient Egyptian religion. In cinematic motion chairs, viewers will fly through temples, sandstorms, and even come face-to-face with Ramses’ mummy in this electrifying animated journey.