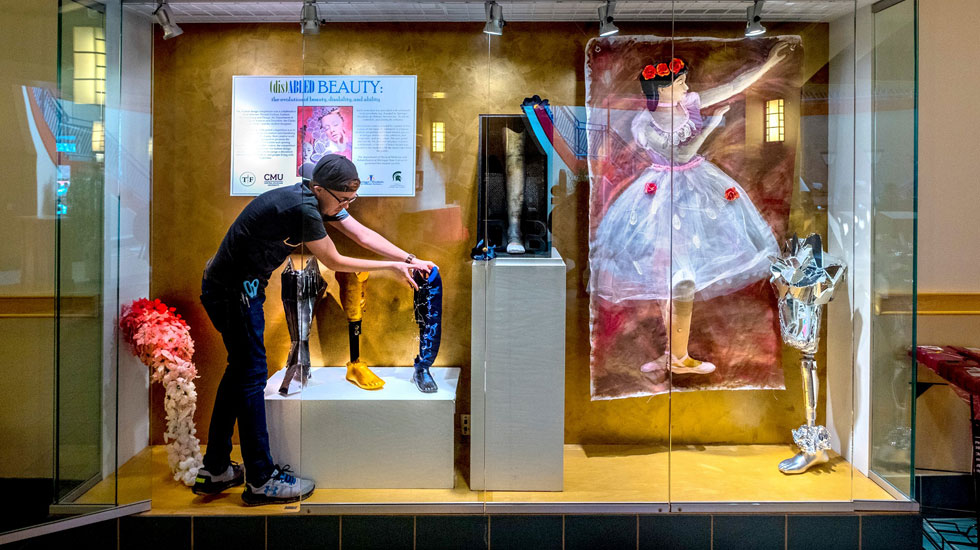 Almost 200 people gathered for the grand opening of the dis(ABLED) Beauty exhibit at Central Michigan University (CMU) in the Clarke Historical Library last month. The event was comprised of speeches, presentations, and a design competition to celebrate inclusive fashion.

The event opened with a speech by Heidi McKenzie, a wheelchair-adaptive clothing designer (who is in a wheelchair herself). McKenzie started a clothing company, Alter Ur Ego, which features jeans designed specifically for wheelchair users. Following McKenzie’s speech was a presentation from graduate student Alexis Jones. She won the 2017 “Concept 2 Consumer” Merchandising Competition, which is put on by the American Association of Textile Chemists and Colorists. Her clothing line, Moxie, was designed for children with tactile issues and sensitive skin conditions.

The dis(ABLED) BEAUTY design competition is aimed toward fashion merchandising and design students at CMU. The purpose of this competition is to celebrate the evolution of beauty, disability, and ability of highly designed assistive devices, adaptive devices, and apparel. Each applicant was provided with a prosthesis device, donated by Springer Prosthetic & Orthotic Services, which they then highlighted by adding unique surface designs.

The (dis)ABLED beauty exhibit is designed to highlight the evolution of disability and ability. Therefore, the design competition was created in celebration of highly designed assistive and adaptive devices for those living with disabilities. Historically, people with disabilities have not always been held in the same esteem as able-bodied persons regarding level of beauty, intelligence, and ability. Thus, many prefer assistive devices that would hide their disabilities in order to avoid the negative stigmatization that accompany the concept. This exhibition features items including prostheses and mobility devices aimed to change the negative stigma associated with disabilities. The items featured in this exhibition are not for concealing, but rather, designed to be showcased and celebrated.

The exhibition in Clarke Historical Library included a broad range of adaptive and assistive pieces. Some were conceptual, like a dress adorned with copper wire and hearing aid batteries. Others were functional, including wheelchair-adaptive clothing and fashionable hearing aid covers.

(dis)ABLED BEAUTY will be open for viewing until August 2018.