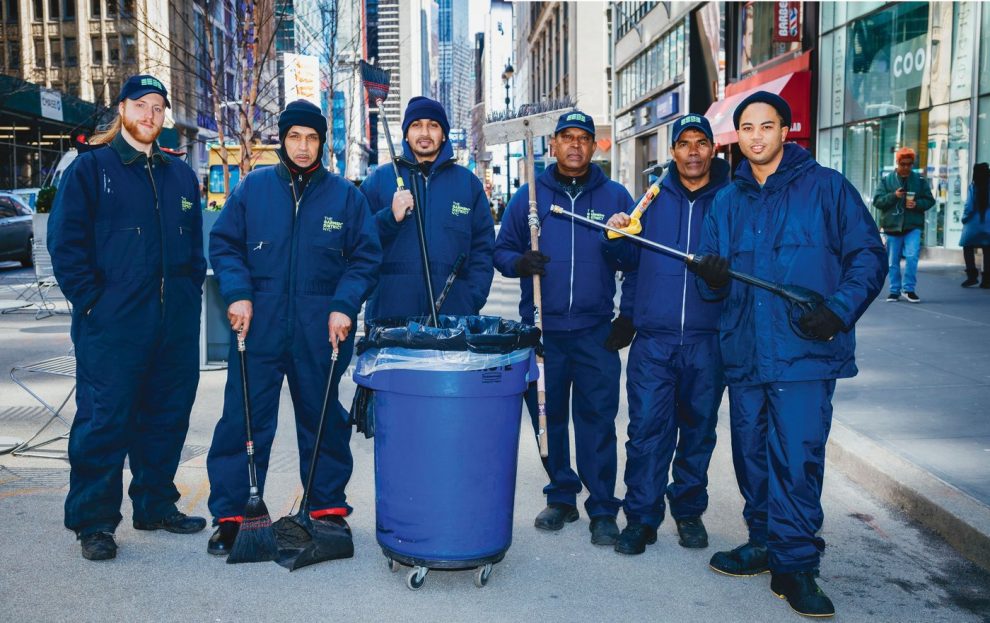 What once was home to tens of thousands of garmentos has become a vibrant mixed-use neighborhood with some of the city’s most diverse tenants, activities and outdoor spaces in the heart of midtown Manhattan — and that’s partially thanks to the Garment District Alliance.

While the area has been expanding to include more than the fashion world, behind the scenes, the Garment District Alliance’s sanitation and security teams have played an instrumental role in the evolution of the neighborhood, working tirelessly day-in and day-out to maintain and beautify the district.

By working in conjunction with building management, businesses and the New York City Department of Sanitation, the Garment District Alliance’s sanitation crew keeps the neighborhood clean. On duty seven days a week, the 45 sanitation staff members maintain streets and sidewalks, remove graffiti and perform maintenance, including street furniture painting and steam-cleaning of sidewalks. This month, the Garment District Alliance’s sanitation crew collected 54.3 tons of garbage, and to date, have collected 12,281 tons in total.

“Our sanitation and safety teams are vital to the Garment District, and we are grateful for their unwavering commitment to maintaining and beautifying the neighborhood for all local New Yorkers and visitors,” said Barbara Blair, president of the Garment District Alliance.

Covering the area from West 35th Street to West 41st Street, Fifth Avenue to Ninth Avenue, the Garment District is currently home to 42 hotels (with 12 in development), including the luxury boutique Hotel Hendricks on 38th Street. The district also boasts 250 restaurants, with a Wolfgang’s Steakhouse opening early this summer at 1359 Broadway.

“The Garment District, which once emptied out at 5 p.m., is now a lively 24/7 neighborhood,” Blair said. “The Garment District’s rich history still resonates in the district, but we are able to generate new value as a result of our more diverse tenant base in growth business sectors, new retail and exceptional transportation options.”

“A neighborhood’s history forever remains part of its identity, but respect for the past must never stand in the way of a district’s future hopes.”

The largest commercial office landlord in the Garment District, Empire State Realty Trust, has redeveloped nearly all of its 2.3 million square feet and helped lead the transformation of the Garment District streetscapes by leasing to notable tenants, including Shake Shack, Urban Outfitters, Dr. Martens, Maison Kaiser, Papyrus and Rituals along the Broadway pedestrian plazas.

The successful effort to lift restrictive zoning on the district’s side streets — 11 million square feet of midtown Manhattan space reserved for manufacturing — was completed on December 20, 2018. That action will accelerate the transformation of the area and ensure that it more appropriately blends with midtown’s central business district. Under Blair’s leadership, with the support of the Real Estate Board of New York, the Garment District Alliance negotiated a plan that allowed for the zoning to be lifted.

The Garment District, with its stock of excellent Class B and C buildings on side streets, is poised to become a dynamic and critical supply for new companies locating to contiguous neighbors, like One Vanderbilt, an up-zoned East Midtown and a fast-rising Hudson Yards.

This past January, Brooklyn-based co-working company Industrious signed a lease for nearly 50,000 square feet in Ivanhoe Cambridge’s 1411 Broadway in the Garment District. A month later, Thrive Networks, an IT service provider, doubled its space at Kaufman Organization’s 242 West 36th Street with the addition of more than 7,500 square feet.

More recently, engineering and consulting firm Tetra Tech announced that it is moving its offices to 60,000 square feet in the Garment District. The California-based company signed a lease at George Comfort & Sons’ 498 Seventh Avenue. A major player locally and across New York, the real estate firm has greatly contributed to the changing nature of the Garment District.

Even with all this transformation, the Garment District Alliance is gratified that the fashion industry still makes its home here; recently, Authentic Brands Group took 74,000 square feet in 1411 Broadway.

In July and August, the Garment District Alliance’s Urban Garden summer street closure returned to Broadway from 37th to 38th Streets. This year’s Urban Garden featured artist Carla Torres’ colorful road mural, “The Nymph Pond,” which complemented the summer plantings on the plazas. The Urban Garden created an urban oasis in the middle of the Garment District and provided additional space for the public to experience summer programming and amenities along Broadway, including café tables and chairs, planters, birch trees, turf, Renegade Lemonade every Wednesday, music and more.

“A neighborhood’s history forever remains part of its identity,” added Blair. “But respect for the past must never stand in the way of a district’s future hopes. The carefully devised Garment District rezoning has retained what’s best from yesterday while building an exciting and varied platform that is already demonstrating the promise it holds for tomorrow.”