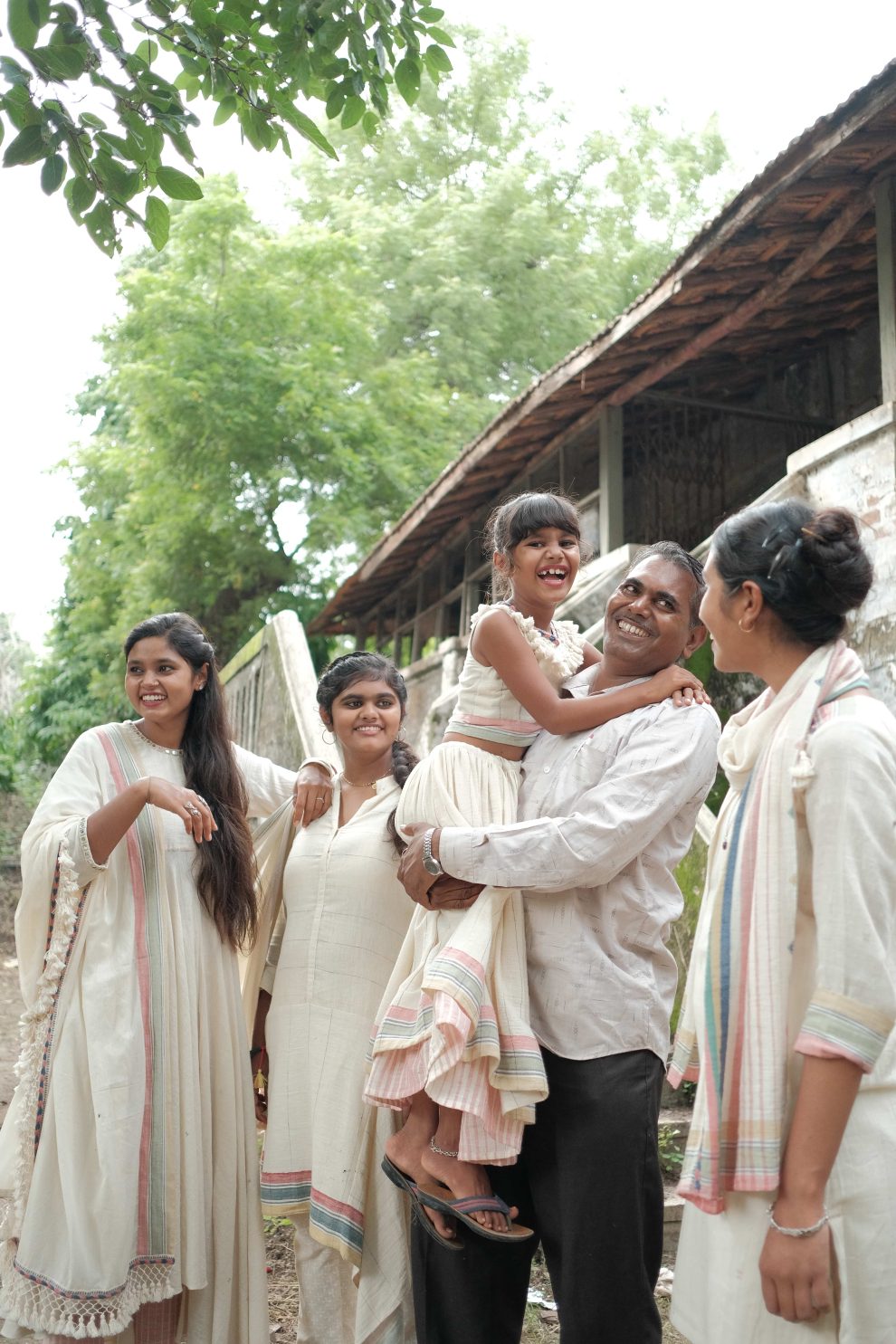 There is an old expression that says, “The journey is more important than the destination.” This meaningful sentiment could not be truer for the Gujarat, India-based clothing brand Purvi Doshi, founded in 1992 and named for the designer. What began for Doshi as simply a fashion label has since evolved over the past 30 years into the sustainable, environmentally friendly, artisan-empowering, cruelty-free, zero-waste force in luxury fashion it is today.

A Brand in Harmony with Nature

With her brand, Doshi endeavors to pave the way for a harmonious coexistence between fashion and nature. Doshi feels strongly that “sustainability is not a trend; it is a belief,” and this belief system has truly influenced Purvi Doshi’s brand identity to the core.

“My vision is to contribute to the well-being of [others],” said Doshi. “Fashion must not come at the cost of other living beings. We must learn to coexist.”

Each Purvi Doshi garment is adorned with beautiful and intricate crafts, like hand-crafted aari embroidery, mirror embroidery and appliqué work, and it is created with ancient weaving and printing techniques. These crafts communicate the lifestyles of the artisans who traditionally practiced these skills. Each design — which includes the distinct combination of stitches, patterns, colors and silhouettes that make up each garment — is inspired by the historical and traditional factors of these processes, and in effect, each design becomes a confluence of cultures, representing a heterogenous mix of unique cultural practices and contemporary style.

Doshi was the first Indian fashion designer to represent khadi, the hand-spun and handwoven Indian textile, at New York Fashion Week in 2017, and she has been recognized with PETA India’s “Compassion in Fashion” award for her efforts to bring awareness about the fashion industry’s cruel effect on silkworms. Her brand is also the first in India to be awarded the Eco-Age Brandmark for recognition of sustainable excellence, issued by a London-based agency that helps brands to impact on the planet through sustainable business strategies.

In 2019, Doshi presented the Wagad collection at Who’s Next, Paris, a biannual international fashion trade show held in Paris, France, which brought the brand to an international platform. The Wagad collection is made from Kala cotton and utilizes the ancient “Kutch weave” — also called an extra-weft weaving technique — to narrate the unique and untapped stories of traditional weavers and their art form through the garments in the collection.

Tucked inside of their homes and hidden within their four walls, these traditional weavers sit facing their handlooms and weave along to the rhythmic sounds of the clamoring wood. With each movement of their spindles from each end of the loom, the weavers bring the Kala cotton to life in the form of garments. The charming, old-world cotton is native to the Kutch region of Gujarat, which is the western-most state of India. Kala cotton is hand-spun and handwoven into a delightful fabric through the Kutch weave technique, wherein a weft yarn is added into the loom to create the fabric’s pattern.

Kala cotton is one of the few genetically pure cotton species that remains in India, and one of the only species of pure, “old world” cottons to be cultivated today on a large scale. This “desi cotton” is indigenous to the arid, drought-prone region of

Kutch, Gujarat, and its short staple length — the average length of the group of fibers — makes the material laborious to weave, though the textile that is produced is strong with a beautiful, course texture. Because it is a rain-fed crop due to the issues that arise due to its staple length, Kala cotton is difficult to produce quickly and on a larger scale, so its presence in the mainstream market has disappeared.

It takes an entire family to process and produce Kala cotton, from farming, ginning and spinning on hand-operated charkha spinning wheels to dyeing the yarns with natural colors and handweaving them on the pit loom. While the fabric was traditionally used to make rugs, dhotis, shawls and other traditional items, Doshi has supported the revival of this age-old tradition of organic and eco-friendly farming and has brought the technique into use for mainstream fashion through the Wagad collection, a tribute to this art form and to the dedication of the weavers in Gujarat. The collection also features the intricate art of hand-appliqué and various hand stitches that embellish the fabrics, techniques created by skilled, often underprivileged women who reside in far-reaching areas of the state.

Purvi Doshi is the first Indian brand to provide complete transparency with the creation of its products through the traceability app, “Field to Body,” that was developed for the Wagad collection. This app allows consumers to trace how, where and who has made the garment that they are about to purchase.

Here is one of the artisans’ stories: Babubhai Ladhubhai Padiyar is a weaver from Kandherai Village, a region that is approximately 25 kilometers from Bhuji, Gujarat, who has acquired the heirloom of weaving art from his forefathers going back five generations. Doshi’s journey of bringing the Wagad collection from “fields to body” began with the Padiyar family’s single loom and has now grown into 10 looms in under a year.

A family that once earned its livelihood through one loom, the Padiyar family today credits Doshi with its upward movement and the induction of its art in its rightful place as a part of the high fashion canon. And as a further tribute to the craft of weaving and those who are involved in it, Doshi celebrates National Handloom Day with Babubhai and his daughters.

“It is deeply satisfying to see [weavers] wearing what they have made for years but are adorning for the first time,” said Doshi. “I feel that the circle of goodness has been completed in the true sense. My heart is filled with gratitude toward those who helped to make [the garments] what they are today — in a great country, with a great craft and great heroes that we call weavers. For once, the artisans are the face of the movement, rather than being behind the scenes.”