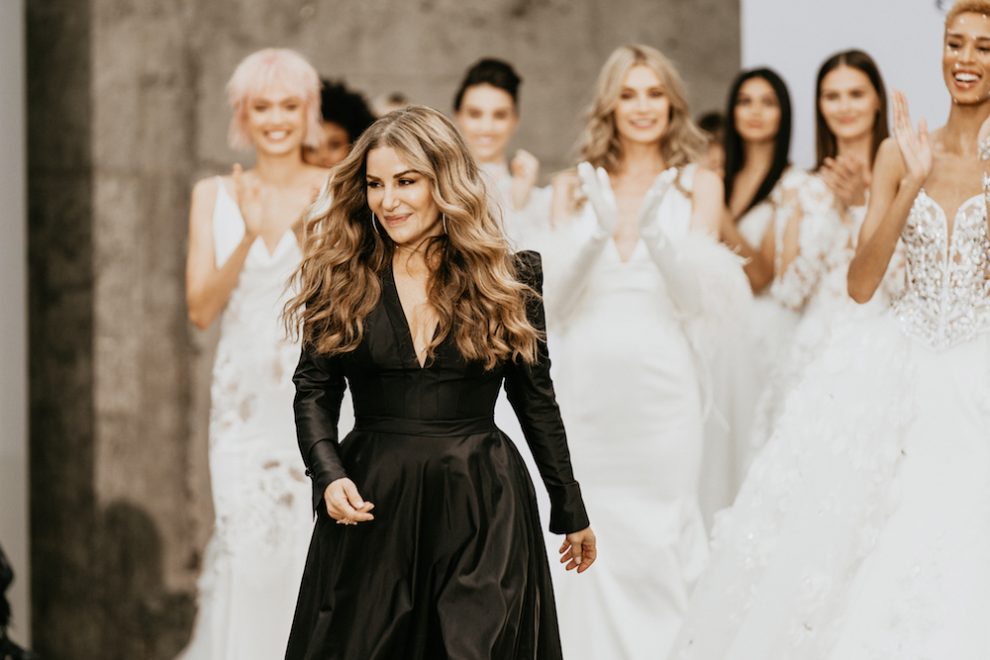 When people think of wedding dress designer Pnina Tornai, they are bound to think of glamor. From sheer bodices to intricate lace details, for Tornai, no detail is too small to be given her utmost attention. But her life hasn’t always been so glamorous. As a young woman, Tornai’s life was full of challenges at every turn. From her abusive marriage to her first husband to losing custody of her son for 10 years, the glittery version of Tornai that’s so well-known was not always her reality.

So what changed her life? When Tornai was young, she had dreams of becoming a famous actress. She even left her home country of Israel to spend some time study acting in Paris, France. However, after her abusive marriage ended, Tornai found herself recalibrating her life. She needed a new path, and wondered what God could possibly have in store for her after what she had been through. It’s at this point that she quite literally dreamed her current reality into existence. When she was asleep one night, she dreamed she was looking up into the sky and gowns began falling out of the sky all around her.

“Right at the beginning when I was thinking ‘okay what am I going to do now, what can I do?’ I had no profession. I remember this dream,” Tornai said. “I was laying on the lawn, on a big lawn, and these amazing, beautiful ball gowns were falling from the sky towards me and I could see every little detail from the golden threads to the beadwork and the fabrics. And I woke up in the morning, looked up to the sky and said ‘God, I understand the message, I know what you want me to do, but you will have to help me with this because I have no idea,’ and he did.”

Inspired by what she believed to be a moment of divine intervention, Tornai sprang into action, working on dress designs and finding seamstresses to help her make them into reality. Soon, Tornai’s dresses had taken off all over Israel.

“I became, overnight, the leading designer in my country, in Israel, and brides were standing in line,” Tornai said. “I hated to say no, but sometimes I was so overbooked that it was crazy. It was really, really crazy.”

After becoming more successful than she ever could have imagined in her home country, Tornai decided it was finally time for her to take on the wider world. The best way to do that, she decided, was to start with the United States.

“At a certain point I felt like I’d reached the ceiling, that I couldn’t grow anymore, and that’s when I decided that I wanted to conquer the world,” Tornai said. “And what better than to start with the United States of America if you want to conquer the world? That’s the country that the whole world looks at. So I researched and I found out that Kleinfeld was the biggest bridal store in the world, and I wanted to be there.”

However, Kleinfeld was not initially receptive to Tornai’s signature sexy, over-the-top style. After her first meeting with them, she flew back home to Israel disappointed.

“I flew back home, but of course I cried the whole way — almost 11 hours crying — on the plane back to Israel because I was told no,” Tornai said.

But Tornai did not let the rejection sting for long. Once she returned to Israel she became determined to try again, and began working on designs for a new collection to show at Kleinfeld.

“My mother always used to say (may she rest in peace), because we’re four girls in the family, she would say ‘this one’ and point to me ‘if she wants something, even if God comes down to earth, he will only delay her by 10 minutes, because nobody can stop this thing. She knows what she wants and she gets it,’” Tornai said.

When Tornai returned to New York City with her new collection, she finally convinced Kleinfeld to give her designs a chance and put them on the floor for clients to see. Before she knew it, the owner of Kleinfeld, Mara Urshel, was calling her to inform her that her dresses were flying off the rack so quickly they weren’t sure she would be able to keep up with the production.

“I answered her very nonchalant, I said ‘oh don’t worry, Mara, I have all the stuff needed to manufacture these dresses!’ and I hung up the phone and recruited every seamstress and every pattern maker I could find in the country,” Tornai said.

The rest, as they say, is history. Tornai quickly became the top seller at Kleinfeld and became the only designer to have her own boutique within the store. Her designs are favored by many of the brides featured on the TLC television show “Say Yes to the Dress,” which follows brides as they search for their wedding dresses at Kleinfeld. Whether they end up on an episode of the show or not, brides come from all over the world to try on a Pnina Tornai gown and have their own special moment of “saying yes to the dress.”

“Everything I create is a piece of me,” Tornai said. “It’s really me putting my heart, my soul into a creation, whether it’s my dresses or my jewelry. So when they say yes, they’re actually saying yes to me. I’ve been doing this thousands and thousands of times in my life like, ‘okay, so, my love, are you saying yes to my dress?’ and when they say yes, my heart always takes a jump, that’s exactly how I can describe it, it just jumps.”

While Tornai may be best known for her exquisite gowns, she is also a woman of many talents. She has fulfilled her childhood dream of being an actress, playing the role of Monique, the lead character’s wife, on the Israeli political comedy “Polishuk,” in addition to her multitude of reality TV appearances. She is a gourmet chef and has recently entered the jewelry world in collaboration with jewelry brand Jared. Unable to travel to New York City for her normal bridal meetings and trunk shows at Kleinfeld when Israel locked down in the early days of the COVID-19 pandemic, Tornai turned her attention to her other interests instead.

“When COVID started, I was like ‘oh my god, it’s the end of the world,’ and there was a lockdown in Israel and they were very serious over there,” Tornai said. “I’m a VIP master chef in Israel, I participated in MasterChef VIP and I was a runner-up. So because I’m a chef, I started cooking and filming these videos and they became so successful on Instagram that I was thankful to at least have something to share with all my followers and all the people I love so much.”

As the pandemic continued, Jared met virtually with Tornai to put together their jewelry collaboration. However, before the vaccines were widely available and travel was deemed safe, Jared and Tornai decided they needed a commercial for their collaboration. Unable to fly to the U.S. to shoot the commercial, Tornai formed her own film team at home in Israel.

“We got all the approvals from the Israeli government and we shot the commercial with a 100% Israeli team, from the director of photography to the water girl,” she said.

While travel restrictions and safety have improved and Tornai has once again begun traveling to New York City on a routine basis, her jewelry line has continued to expand. Her newest installation of the collection has just been released, which addresses the need for jewelry beyond rings, featuring necklaces and earrings.

“I just launched my new fashion jewelry collection,” Tornai said. “Jared has been an amazing partner to this journey, and this is my fourth collection that I’m launching in one year.”

Tornai also looks forward to the wave of post-pandemic weddings, where brides finally get to celebrate their love after more than a year of anxieties and canceled plans. She has found that many brides she has worked with in the past few months are ecstatic to have their wedding plans back on and are looking to go above and beyond with their celebrations.

“I feel like brides want to celebrate more than ever, so you’ll be seeing in my new collection a lot of ball gowns (because the bigger the better), a lot of bling (I’m the queen of bling after all), and this is the time to celebrate, sparkle and fireworks, because we’re back to life,” Tornai said. “It’s going to be the most beautiful collection ever and I hope that it will inspire the industry to celebrate the returning to our beautiful, beautiful weddings that we all dreamt of.”