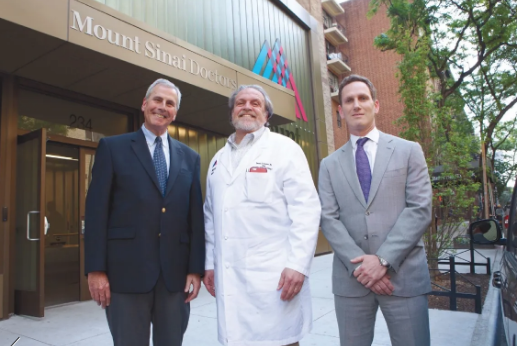 When people hear the term “radiologist,” they often envision someone hunched over a desk in a dark room analyzing X-rays, CT scans, PET scans and MRIs. While that is certainly part of the job, Burton Paul Drayer, MD, has always viewed his mandate more broadly. In addition to doing more than his fair share of radiological diagnostics and treatment protocol development, Dr. Drayer also has performed pivotal research, served key roles in national and international radiological societies and journals, delivered hundreds of invited lectures around the globe and provided transformational leadership to the Mount Sinai Health System.

“I always felt that leadership was part of being a doctor,” said Dr. Drayer, the Charles M. and Marilyn Newman Professor and system chair of radiology for The Mount Sinai Health System and the Icahn School of Medicine at Mount Sinai.

Over two decades at Mount Sinai, Dr. Drayer has held a variety of roles. From 2003 to 2008, he served as president of The Mount Sinai Hospital and executive vice president for hospital and clinical affairs. His team engineered a turnaround in financial performance, operational excellence and strategic growth. For many years, Dr. Drayer served as executive vice president for risk, overseeing medical liability and enterprise risk evaluation. He was on the Board of Hospitals Insurance Company, a malpractice liability company insuring The Mount Sinai Hospital and its doctors. From 2014 until January 2021, Dr. Drayer was CEO of the Mount Sinai Faculty Practice Associates (with more than 2,500 full-time physicians) and Dean for Clinical Affairs at Icahn Mount Sinai.

“My career as a radiologist has always been focused on academic excellence: teaching, research and clinical service,” said Dr. Drayer. “I’ve always loved working collaboratively with and mentoring colleagues. I think management is really about working with people — liking them, listening to them and respecting them.” Dr. Drayer makes it clear that this includes the entire health care team. “As a radiologist, I’ve always worked closely with a diverse staff of technologists, schedulers, billers, nurses and physicists. We all work as a team to give the best possible care to our patients. Each link in the chain is critically important.”

Dr. Drayer applies this attitude to everything he does in his department, in the faculty practice and in the health system. In fact, Dr. Drayer’s deep respect for non-physician employees lead to development of Mount Sinai’s Commitment to Caring (C2C) program, which focuses on skill enhancement for empathetic patient-centered care. C2C also prioritizes staff and physician well-being.

Even as a top administrator, Dr. Drayer continues working closely with diagnostic and therapeutic radiologists and referring physicians because he believes that the physician perspective is an important one and needs to be represented in high-level decisions. Dr. Drayer is a widely recognized both locally and nationally as a master clinician and educator in neuroradiology and is consistently on the list of best doctors in New York.

His interest in the architectural design and construction of outpatient and medical center facilities both at the Barrow Neurological Institute in Phoenix and at Mount Sinai reflects his lifelong commitment to the patient experience and always “keeping the patient in the center.”

“You don’t look at a piece of film anymore when you read MRI, a CT scan or an X-ray,” he explained. “These days, you look at the computer screen.”

Mount Sinai’s system is completely integrated, he explained, “That means a Mount Sinai doctor can read an image at any place, anywhere, any time.”

In other words, if a patient gets a knee X-ray during an emergency room visit, then gets a follow-up image done in a faculty practice office and additional images when admitted for surgery, all the images are readily and centrally available in a single file for the treating physicians. The PACS system also promotes remote interpretation of images, which proved especially useful during the worst of the COVID-19 pandemic, Dr. Drayer noted.

Dr. Drayer is internationally known for his research using CT scanning and MRI to measure brain iron, cerebral blood flow and the safety of CT and MRI contrast media, as well as popularizing the use of magnetic resonance angiography. Using many techniques and concepts that he developed has helped simplify the minimally invasive diagnosis of Alzheimer’s and Parkinson’s diseases, multiple sclerosis, cerebral infarction, brain tumors, vascular malformations and metabolic disorders affecting the brain. Dr. Drayer has published more than 200 articles in major journals as well as multiple book chapters.  He has served on many editorial boards and was editor of Neuroimaging Clinics of North America from 1990 to 2005.

While Dr. Drayer was studying radiology at Pittsburgh, CT, scanning was in its infancy, quickly followed by magnetic resonance imaging. “Timing is everything,” he said “These two tools revolutionized health care; suddenly, doctors could accurately and safely see inside the body.”

“It was like doing an autopsy,” explained Dr. Drayer. “Except the patient was still alive. Miraculously, we could acquire all the information we needed rapidly, and it was minimally invasively.”

Dr. Drayer is board certified in radiology, neuroradiology (with a certificate of added qualification) and neurology.

Dr. Drayer’s first academic appointment was in 1977, when he became associate professor of radiology at the University of Pittsburgh Health Center.  After two years there, Dr. Drayer moved to Durham, North Carolina, where he was professor of radiology and assistant professor of medicine (neurology) at Duke University Medical Center. By the time he left, in 1986, Dr. Drayer had served as section chief of neuroradiology, director of neuroimaging and associate director of metabolic imaging. In 1986, Dr. Drayer was appointed chair of the division of neuroimaging research-education at the Barrow Neurological Institute in Phoenix and chair of radiology at the nearby St. Joseph’s Hospital and Medical Center. After almost a decade, Dr. Drayer made his way to The Mount Sinai Hospital and Icahn School of Medicine at Mount Sinai in 1995.

Throughout his career, Dr. Drayer has been committed to serving the radiology and larger health care community. He has served on the board of directors of numerous organizations, including the American Society of Neuroradiology (1990-2000) where he was president in 1996-1997 and founding member of its Research Foundation; Radiology Society of North American (RSNA) from 2003 to 2011 where he was chair of the board in 2009, president in 2011 and chair of the RSNA Research and Education Foundation from 2014-2016; American College of Radiology (2009-2015) and the Academy of Radiology Research (1995-2000 and 2009-2012) where he was a strong supporter for the creation of the Biomedical Engineering and Imaging Institute of the National Institutes of Health. Dr. Drayer was the only person from Mount Sinai to serve as president of the RSNA from over the association’s 100-year history.

Among his many honors, Dr. Drayer has received the American Society of Neuroradiology Cornelius Dyke (1977) and Outstanding Paper (1978, 1981) awards; the Jacobi Medallion of Mount Sinai (2009); honorary fellowship in the Royal College of Surgeons, Ireland (2011); honorary membership in the European Society of Radiology (2012); the Gold Medal of the American Society of Neuroradiology (2011); the Gold Metal of the Radiological Society of North America (2016) and the Distinguished Radiologist Award from the New York Roentgen Society in 2020.

Perhaps his biggest achievement, though, he said, is his half-century-plus marriage to Michaele Drayer. A retired, certified public accountant, Michaele holds a master’s degree in English and is a bridge master. “She always makes me laugh,” said Dr. Drayer.

The couple has two sons, Aron and Alex, and five granddaughters. Dr. Drayer is an avid golfer and sports enthusiast and enjoys architecture, art and movies.

Wave of the Future

From the vantage point of a full and varied career, Dr. Drayer sees challenges and opportunities ahead for health care.

Artificial intelligence (AI), for example, is the next dramatic development in medicine, he said. AI should help health care providers become more efficient and accurate — hopefully without increasing costs. AI may, for instance, be able to help interpret a diagnostic image, provide a second opinion or rapid initial interpretation and will likely accelerate the speed and accuracy of post-processing images. The other change that Dr. Drayer anticipates, and has long advocated for, is transferring even more health care out of the hospital and into outpatient offices and patient homes. Technological advances such as robotic surgery, AI and other minimally invasive approaches, many of which have been developed by interventional radiologists, translate into shorter recovery times and less need for inpatient hospital care.

Radiology will continue to play a major role in these advances. “Radiology has always been exciting,” said Dr. Drayer. “The best part of radiology is that it continues to provide new and innovative opportunities in research, education, clinical care and operational excellence.”