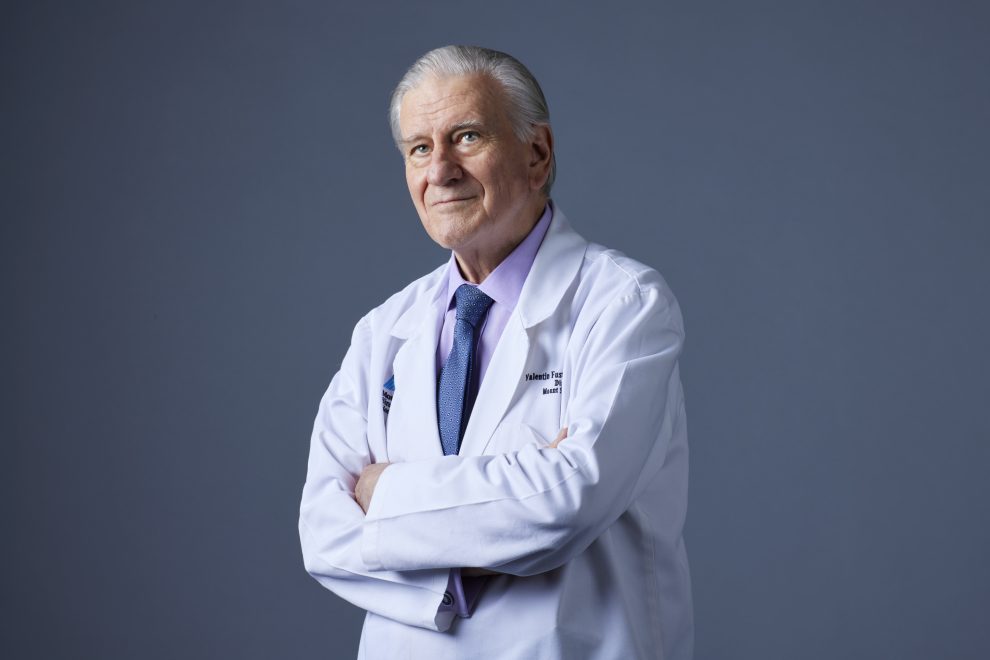 Mount Sinai Heart at The Mount Sinai Hospital is ranked sixth in the nation in cardiology and heart surgery by “U.S. News & World Report” and fourth in the world by “Newsweek.” These distinctions have been achieved, Dr. Fuster said, largely due to the very high caliber of personnel at all levels — nurses, physicians, technicians and administrators.

“At Mount Sinai, it’s all about the people,” he emphasized. “We would not have become one of the world’s leading centers in cardiology if we did not have such an amazing team and a true sense of unity throughout Mount Sinai Heart.”

Having served as president of the American Heart Association and president of the World Heart Federation, Dr. Fuster has made unparalleled contributions to cardiovascular science and medicine, with an h-index of 204 within Google Scholar Metrics, representing the scientific impact of his work. He is a prolific author and the only cardiologist to have received the highest awards for research from the four leading international cardiology organizations: the American College of Cardiology (Living Legend and Lifetime Achievement Award), the American Heart Association (Gold Medal and Research Achievement Award), the European Society of Cardiology (Gold Medal Award) and the Inter-American Society of Cardiology (Gold Medal Award).

A consistent recipient of awards granted by the U.S. National Institutes of Health, Dr. Fuster has also been named doctor honoris causa by 33 universities. In January 2022, he traveled to Thailand to accept the highly recognized Prince Mahidol Award for his international leadership in promoting global cardiovascular health and groundbreaking contributions to cardiovascular medicine over the last four decades. Five of the past winners of this award have subsequently received the Nobel Prize.

In February 2022, Mount Sinai launched the $100 million VF100 campaign to rename Mount Sinai Heart in honor of Dr. Fuster. The announcement of the campaign declared, “Dr. Fuster’s history of excellence in patient care, research, education, and community outreach is unparalleled. We are delighted to join these two icons, Dr. Valentín Fuster and Mount Sinai Heart, in this meaningful and historic way to endure Dr. Fuster’s vision and legacy continue far into the future.”

Dr. Fuster’s vision, which will be supported by the campaign, rests on five pillars for redefining heart health: prioritizing the patient experience; driving innovation in basic, clinical, and translational cardiovascular research; recruiting the leaders of tomorrow; educating the next generation and changing habits in the community.

“The number one objective in medicine is the patient,” Dr. Fuster says. “Most of what you learn about a particular patient is at the bedside.”

A grateful patient says, “Anyone that has been a patient of Dr. Fuster can speak to how special he is, whether you are getting phone calls from him on the weekend, or he is coming in at 4:30 in the morning to see you in your hospital bed. Dr. Fuster is the most committed, dedicated and compassionate person you’ll ever meet. And as a patient, you just feel lucky to have him in your corner.”

Dr. Fuster’s revolutionary understanding and delivery of life-saving treatments has made an immeasurable difference for cardiac patients.

“I am proud of what’s been accomplished thus far, but we have only just begun to address the challenge of creating a ‘global culture’ to combat cardiovascular disease,” he said. “Based on science and modern technology, we need to accelerate our work in preventive measures to avert a heart attack before it happens.”

Dr. Fuster’s forward-looking areas of research include imaging techniques for earlier detection of atherosclerosis — the buildup of plaque in arteries and surrounding the heart that leads to coronary artery disease. The progression of coronary artery disease is usually undetected. It is often identified at an advanced stage or after a cardiovascular event, such as a heart attack. Dr. Fuster has served as the lead investigator on several studies analyzing the effectiveness of imaging in diagnosing early signs of atherosclerosis in 12,000 individuals. The results suggest that there is a benefit to incorporating cardiac imaging into routine clinical care as it may lead to a more effective diagnosis within this age group. As a result, this protocol is being enacted at Mount Sinai Heart.

Dr. Fuster’s efforts to mentor and educate the next generation of leaders in cardiology have been key to ensuring that Mount Sinai continues to embody the highest standards in cardiac research and patient care.

“I’m a product of mentorship,” he noted, “so I put a lot of effort into training and motivating young people, because the impact can be very significant.”

In fact, Dr. Fuster has mentored so many fellows that his protégés have created the VF Society, a nonprofit organization of more than 250 alumni who trained with him. The VF Society reunites biannually to strengthen their bonds with one another and The Mount Sinai Hospital.

Mount Sinai Heart was an integral part of the response to the COVID-19 pandemic, pioneering a protocol based on Dr. Fuster’s depth of knowledge as a scientist and a clinician. In March 2020, during the early days of the pandemic, Dr. Fuster closely observed patients with blood clots in their legs who had been admitted with COVID-19. After hearing from colleagues in China of other cases of small, pervasive and unusual clotting that had triggered myocardial infarctions, strokes, and pulmonary embolisms, he initiated decisive action.

“We became one of the first medical centers in the world to treat all COVID-19 patients with anticoagulant medications,” said Dr. Fuster, a pioneer in the study of atherothrombotic disease. “It was a decision that we believe saved many lives.”

Building on treatment protocols developed at the height of the COVID-19 pandemic, Mount Sinai Heart launched the global Freedom COVID-19 Anticoagulation Trial to determine the most effective dosage and regimen of anticoagulant therapy in improving the survival rate of hospitalized COVID-19 patients.

“We are finalizing this large study in about four weeks, with a total of 3,600 patients entered, the largest in the field,” Dr. Fuster said.

Educating the Next Generation

All these achievements and honors notwithstanding, Dr. Fuster strongly believes that his mission—the prevention of cardiovascular disease globally—can be achieved only by working from the ground up. He is most passionate about educational interventions with young children between the ages of three and five, at a time when they are most able to absorb important information about health. Since 2006, Dr. Fuster has partnered with “Sesame Street” to reach children at this “golden age.” In the guise of “Dr. Valentín Ruster,” a physician Muppet sporting a familiar shock of silver-gray hair, he helps motivate children to stay healthy through exercise and good diet—currently broadcast in Spanish-speaking countries.

The Familia Project, one of Dr. Fuster’s proudest educational accomplishments, works with parents and children around the world to create family-based cultures of health. This pioneering initiative seeks to reduce obesity, heart attack, and other conditions by addressing cardiovascular risk factors at an early age and at the family level. “Expansion of this program will not only bring more children and their families under the educational umbrella, but will give us the chance to study the effects of socioeconomic factors and teacher characteristics on outcomes,” says Dr. Fuster. This year Mount Sinai will expand these efforts throughout the five boroughs of New York City, seeking to reach 2,000 children ages five to seven by the time it concludes.

After decades in the forefront of cardiology, Dr. Fuster continues to look ahead. Colleagues, students, friends, and family have all heard his characteristic phrase many times: “We move forward; move on.”

While it may be hard to imagine Dr. Valentín Fuster as anything other than a renowned cardiologist, he had another dream as a youth in Spain: to become a professional tennis player. His mentor and fellow tennis enthusiast, Pedro Farreras Valentí — a medical professor and textbook author who was considered the top physician in Spain at that time — encouraged Dr. Fuster to become a physician and cardiologist instead. Mount Sinai and the field of cardiology are so very fortunate that he did.