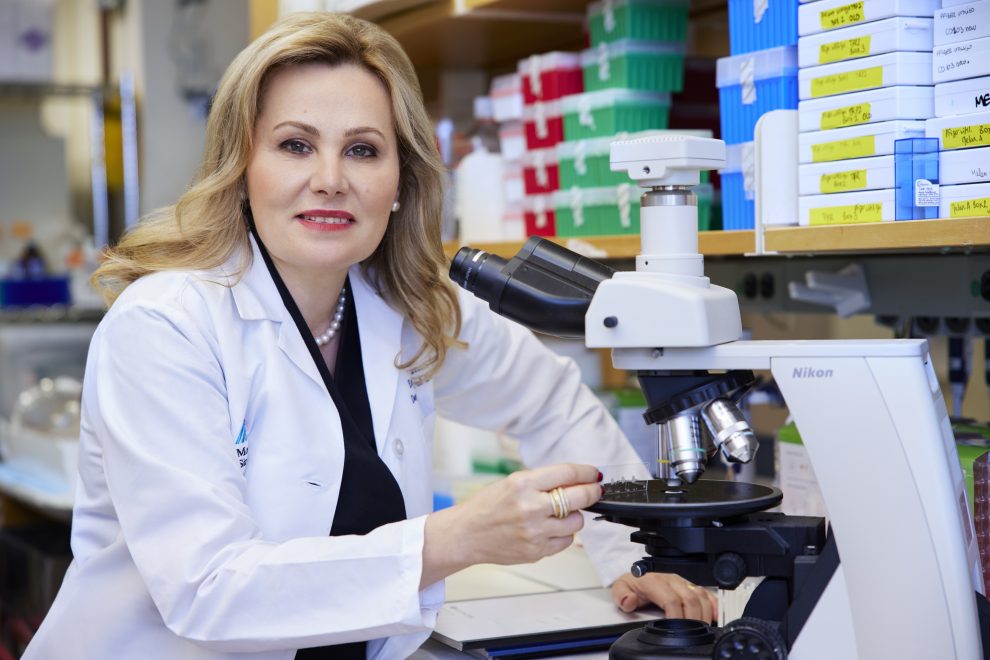 Eight years ago, dermatologist Emma Guttman-Yassky, MD, PhD, started treating a young boy with severe eczema. The skin condition left him covered with raw wounds all over his body. “He was homeschooled because he was afraid to show his face at school,” recalled Dr. Guttman, the Waldman Professor and Chair of Dermatology and Immunology at the Icahn School of Medicine at Mount Sinai in New York City.

She began treating him with the drugs available at the time. A few years into his treatment, a promising new drug, dupilumab (Dupixent), was approved for use in children with eczema. After Dr. Guttman prescribed the medication, the boy’s skin improved dramatically. He returned to school and eventually went to college. “Recently, he came to visit, and his skin was totally clear,” she said. “He told me he owes his professional career to me.”

This is the type of patient story that motivates many physicians to do what they do. But in Dr. Guttman’s case, the story illustrates more than her role as a compassionate doctor. The physician and scientist is also a world leader in eczema research. It was her work that helped create a molecular map of eczema. That map, in turn, led to the development of dupilumab, a drug known as a type II immune blocker, which has transformed the treatment of eczema, asthma and other allergic conditions for children and adults around the world.

“Contributing to this groundbreaking treatment that has helped millions is one of my proudest professional accomplishments,” Dr. Guttman said.

Under Dr. Guttman’s guidance, the Mount Sinai Health System has earned a reputation as a leading center for the research and treatment of eczema as well as alopecia areata, an autoimmune condition that causes hair loss. In March, Mount Sinai launched the Alopecia Center of Excellence, made possible by a $5 million gift from the Pure Family. The Center — the first of its kind — will allow Mount Sinai to deepen and capitalize on its expertise in translational research to provide comprehensive treatment and coordinated services for patients with alopecia areata and other types of alopecia.

In her lab, Dr. Guttman continues to study inflammatory skin conditions, hoping to find new treatments. In 2021, she was tapped to head the dermatology department across the Mount Sinai Health System, and she’s eagerly establishing new research goals to help Mount Sinai’s already proud reputation grow even stronger. “As chair of one of the largest dermatology departments, I want to develop all flavors of research, including building a strong skin cancer research program,” she said.

Dr. Guttman takes dermatology personally. She has had eczema, also known as atopic dermatitis, since she was a child. Multiple members of her family have also dealt with eczema and other allergic conditions, including severe asthma (eczema, asthma and allergies often go hand in hand). Her experiences drew her to dermatology.

Dr. Guttman was born in Romania and immigrated to Israel as a child. She earned her medical degree from the Sackler Faculty of Medicine at Tel-Aviv University and a PhD from Bar-Ilan University, then completed her first dermatology residency at The Technion-Israel Institute of Technology in Haifa. She then came to the United States to pursue a postdoctoral research fellowship at The Rockefeller University. Following her fellowship, she completed a second dermatology residency training at the Weill Cornell Medical College in New York.

Dr. Guttman is board-certified in Israel and the U.S., and the combined training she received in both countries gave her an unusually well-rounded education in dermatology. “I took the best of both experiences, and they built me into what I am today,” she said.

She joined Mount Sinai in 2011, and two years later, after receiving a major grant from the Leo Foundation, launched the Eczema Center of Excellence at Mount Sinai. “The center focuses on providing excellent patient care and offering clinical trials to patients,” she said.

She remains the director of that center and also heads the Occupational Dermatitis Clinic and the Laboratory for Inflammatory Skin Diseases. Dr. Guttman’s successes are fueled by working both as a physician and a scientist. “I take my observations from the clinic into the lab and vice versa, to ultimately improve patients’ lives and develop new treatments,” she said.

One of her most significant breakthroughs was mapping out the role of immune cells in the eczema disease process. Around 2006, scientists had described a genetic mutation that affected the skin’s moisture barrier. The defect leads to a “leaky” barrier thought to let moisture out of the skin and allow allergens in. Scientists were so focused on the skin barrier that they were slow to accept that eczema was caused by immune molecules.

“I talked to many drug companies, but nobody was interested in a new eczema treatment. People even told me it would be a dead end for my career,” Dr.Guttman said.

But Dr. Guttman realized she was on to something important. Her gamble paid off when drug makers Sanofi and Regeneron finally began paying attention and developed dupilumab, which blocks the action of certain immune cells. Today, the drug is widely used to treat allergic conditions such as eczema and asthma. “The drug has revolutionized the field of allergy and asthma,” Dr. Guttman said. “If you believe in what you’re doing, you need to stay strong and go against the dogma.”

A Fresh Look at Alopecia

Now Dr. Guttman is turning her innovative thinking toward alopecia. The disease, recently brought to public attention by actress Jada Pinkett Smith, occurs when the immune system attacks hair follicles. Hair falls out in clumps, sometimes progressing to total baldness. “It’s a very difficult disease emotionally, and one that changes the way patients see themselves or their identity,” Dr. Guttman said.

While caring for patients with both eczema and alopecia, she noticed that some people treated with dupilumab started to regrow hair. That was unexpected since researchers believed alopecia and eczema followed two different inflammatory processes. They thought alopecia was linked to an immune process called type I immunity, while eczema was linked to a different process, called type II immunity. So how was it possible that a drug designed for eczema also improved alopecia?

Most of the alopecia research had been done in mice. Dr. Guttman started studying blood and scalp samples from people with alopecia, and once again, she turned conventional wisdom on its head. Her research showed that type I and type II processes often coexist, and both are at play in alopecia and eczema. Based on those findings, she started a clinical trial that showed dupilumab improved alopecia in about half of people — specifically, those with a personal or family history of allergy or an elevated level of certain immune cells in their blood.

Now she is continuing the research to determine the drug’s effectiveness in that population. Existing treatments for alopecia have some serious side effects, Guttman pointed out. Dupilumab is exciting because it’s a safe drug. Long-term safety is important for a chronic disease such as alopecia, which can last a lifetime. “Our aim isn’t just a drug to regrow hair, but a drug that’s safe enough for patients to take all their lives,” she said.

She also hopes to uncover whether a different disease process might be at play in the half of people with alopecia who don’t have a history of allergies. Meanwhile, she continues her eczema research — which she calls her “first love” — in hopes of finding a drug that will halt the disease process rather than just treat the symptoms.

Under her guidance, Mount Sinai has established a reputation as a leader in eczema and alopecia treatment. “We have dedicated centers with physicians and nurses who really understand these diseases,” she said. “To make a big difference in patients’ lives, you have to bridge great clinical expertise, strong research and clinical trials. That’s exactly what Mount Sinai offers.”

The department is making progress not only in alopecia and eczema research, but in many other conditions, including keloids, psoriasis, cutaneous T-cell lymphoma and skin cancer. “We want to solve many more dermatological conditions, from bench to bedside and back,” Guttman said.

As a woman and an immigrant, Dr. Guttman has often had to prove herself. Now, she’s committed to giving other researchers and physicians a chance, no matter what their background is. “I mentor many students, and I’m passionate about giving good people a chance to succeed,” she said. “We have a very diverse department, and I want to make sure everyone is represented at the table.”

After a career that has taken her from one side of the globe to another, she’s thrilled to have finally landed in New York. “Mount Sinai is a lot like me. I love the innovative thinking and when there is a problem, we see solutions,” Dr. Guttman said. “We want to make a difference in our patients’ lives.”