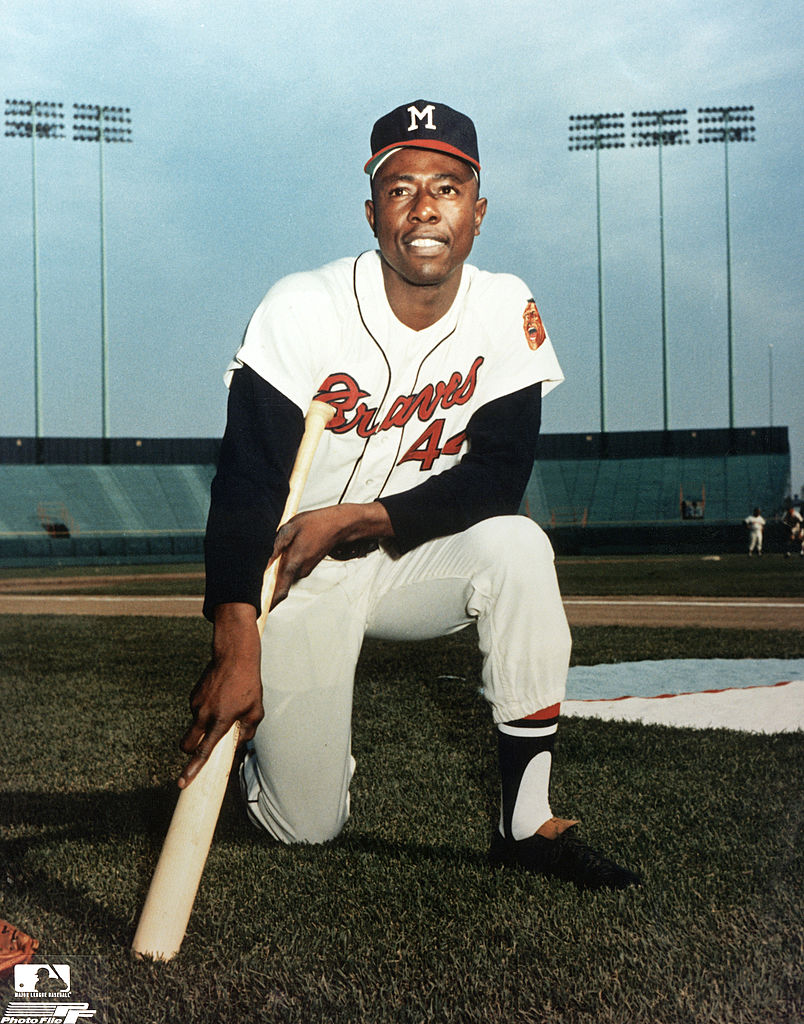 What struck me most about Hank Aaron during our most memorable “Sports Innerview” television sit-down in 1989 was his humility. Aaron was in Manhattan and being honored by Master Card as part of its “Greatest Moments in Baseball History” program. It was an honor, he told me, that meant more to him than anything else he had ever achieved. That was a huge statement coming from Aaron, I thought, as the affable, somewhat shy gentleman was one of the greatest baseball players of all time! Yet he had absolutely no air of arrogance about him.

Aaron played 23 seasons in the majors, for the Milwaukee/Atlanta Braves from 1955 through 1974 in the National League and with the Milwaukee Brewers from 1975 to 1976 in the American League. He won the World Series for the then-Milwaukee Braves in 1957, was a 25-time All-Star, four-time NL home run leader, four-time RBI leader and two-time NL batting champ. Aaron didn’t just break records, he destroyed them. He hit 24 or more home runs every year from 1955 through 1973. At his retirement, he held most of Major League Baseball’s career power-hitting records. He was inducted into the Baseball Hall of Fame in 1982.

But Hammerin’ Hank, as he was nicknamed, was most famous for his 755 career home runs, breaking Babe Ruth’s home run record that had stood for 33 years. Ruth had become a legend, as he hit 714 career home runs in a career that spanned 22 seasons, from 1914 to 1935.

When I told Aaron that many people thought he was one of the greatest players to ever pick up a bat, Aaron humbly replied, “Well, thank you. I’m glad to be included in that. … I played with guys like Mickey Mantle, Willie Mays, Ernie Banks, [Sandy] Koufax, [Bob] Gibson. A lot of great ball players played in that era. When you mentioned that I’m one of the greatest, that’s fine, that makes me feel very, very good, because, believe me, those guys were tremendous.”

I then asked if he thought his 755 home runs was the most significant record in baseball (at that time).

“I don’t know if it’s the most significant record. When I was approaching that record, everyone was saying that they thought that was the only record that would never be broken, excluding Joe DiMaggio’s 56-game hitting streak,” Aaron replied. “It was good that I broke it and the reason I think that it happened to me is that the fact that I played with some very good ballplayers. [Eddie] Matthews [my teammate] was there for a long time with me. Anytime you have the protection behind you, and if you’re any kind of player at all, you’re certainly going to attain a lot of records.”

Aaron ended the 1973 season one home run short of the record. He explained that on April 4, 1974, the day he tied the record in a game against the Cincinnati Reds, “They said, ‘What do you want today?’ It was the anniversary of Martin Luther King’s assassination. And I talked to the Cincinnati people, and I said, ‘What I’d like to have is just a moment of silence for Dr. King.’ They said, ‘We don’t want to get into politics.’ I said, ‘It has nothing to do with politics. He is just a man who needs to be remembered for what he has done for all of us in America.’ About 10 minutes later, the President of the United States came through the tunnel; they had told me just a moment ago they told me they didn’t want to get into politics, but they had one of the biggest politicians there. …  I guess a year before then, everyone started talking about where I was going to hit the home run as if I knew … I didn’t know where I was going to hit the home run.”

“As if you can plan something like that,” I added.

Aaron continued, “Commissioner Bowie Kuhn said, ‘Well, according to my records, Hank Aaron played today, he was off yesterday, so he has to play two out of three games everywhere he goes.’ And I said, ‘Well, fine.’ I wish somebody would give me a choice of doing what I wanted to do. Nobody ever gave me a choice.”

Aaron played two out of three and tied Ruth’s record in his very first at-bat on his first swing of the season. “I hit a home run the first time up, off of Jack Billingham and the next day, I think I didn’t play at all and then the next day, I went 0 for 4, something like that, and somebody said, ‘Were you really trying!?’”

The Braves returned to Atlanta and on April 8, 1974, in the fourth inning, Aaron hit home run number 715 off LA Dodgers pitcher Al Downing.

As Aaron closed in on the home run record, he received thousands of letters every week, including hate mail from people who did not want to see him break Ruth’s homerun record. He was the recipient of death threats. Aaron admitted he did not know if he’d live to see the 1974 season!

“It should have been the happiest moment of my life and yet, it probably was the saddest moment of my baseball career because I was living in a fishbowl,” revealed Aaron. “I’d go to the ballpark and if the bus was not able to pull onto the playing field to get me out then I had to have policemen get me out of the back exits. My teammates would check into one hotel, and I’d have to stay in another one.”

Was it totally racially motivated or because he was breaking Ruth’s long-standing home run record?

“I think it was a little of both,” Aaron shared. “I think people wanted to see and be part of baseball history. But I couldn’t take anything for granted because of all the mail I had received. There was almost a year and a half in which I wasn’t allowed to open any mail because all of it had to go through an FBI agent to find out if there was anything damaging. I had two sons in a private school and the good thing about that is that they didn’t allow any of the press to come on campus. But … my daughter, who was a student, was not allowed to enjoy her recreation. She was confined on the campus because of all the hate mail I was receiving every day, threatening to kidnap [her] and things like that. So it was a very tough time for me, about a year and a half.”

Aaron experienced racism his entire career. “It was tough from a lot of standpoints,” admitted Aaron. “When you play with your teammates and have the bus driver drive up to a restaurant and tell the white players to get out and they can eat and then they tell you, ‘You have 40 minutes to go across town, to eat and get back,’ it was very frustrating …  Then when they are driving to the city, and they drive up to the hotel and let the white players out and then you have to get in a cab and go someplace else to stay. During spring training, you can’t bring your family. … Your family doesn’t have anything to do because you can’t go to the racetrack. … There’s a lot that you have that really bothers you as a human being and you kind of wonder, since I am part of this ballclub, I am making you money, I’m trying to help you win a championship, why not all of us stay as a family, and do things as a family and maybe we can break some of these racial doors down?”

He continued, “Even in some places like St. Louis, Missouri, we were able to stay at the hotel, but they wouldn’t let us come down in the lobby to eat to have our breakfast or dinner.”

“Unbelievable,” I exclaimed in disgust. We ended our interview with him expressing his belief in the need for changes in the baseball industry, looking forward to a more equal future for all.