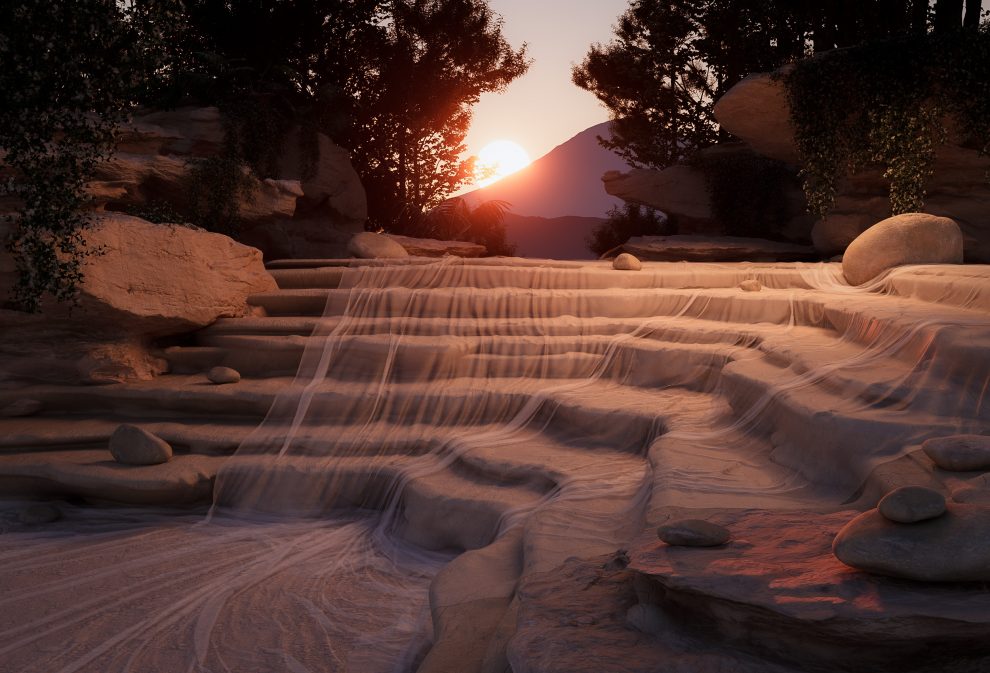 At a quick first glance, it’s easy to mistake Australian Artist Paul Milinski’s work for a striking photograph of nature or sleek modern architecture. However, upon closer examination, the incredible details of his digital artwork start to reveal themselves, pulling you into the beauty of his dreamlike scenes.

Though Milinski was drawn to creating art from a young age, he was discouraged from making the “impractical” decision to go into art as a career as he got older. But no matter what else Milinski did, he kept having constant the urge to draw and create.

“I was drawing from a really young age, all through primary school and a little bit through high school until I left, and I think what I learned about artwork at my school was that it’s not a good career option and there’s no real future in it,” Milinski said. “So, I stopped pursuing it for a long time and I did a lot of labor work, a lot of factory work, things like that, but while I’d be working at the factory I would be sort of drawing on the desk or something like that. So, I always knew I wasn’t fitting in there, so it got to the point where nothing felt right, so I just sort of dropped the job that I had (it was a landscaping job I think) and then went to do some graphic design and then put a folio together, got a job, did that for a while, started leaning more into art through graphic design, and then just started putting artworks out through my Instagram on the side, just for fun.”

Once Milinski began posting his artwork on Instagram, his career began to shift.

“[My artwork] was received very well by people [on Instagram], and then I just sort of went out on my own, and now I’m creating art every second I’m alive. So, I’m making up for all those years that I wasn’t doing it,” Milinski said.

Now fully embracing his creativity, Milinski finds inspiration in even the smallest parts of everyday life.

“I’m completely open to inspiration,” Milinski said. “Even something like a smell will send you back to a distant memory, where the lighting was a certain way, so maybe one of my scenes might have that sort of lighting in it. Right now, I’m getting a lot of inspiration from writing, like lyrics from music; I like to get inspiration from there. Obviously, there’s some visuals that will spark something, that’s undeniable. But I think the key is to get little bits of inspiration from multiple sources and then just apply it to the one piece, and I think that’s how you get the unique artwork.”

Milinski’s striking artwork even garnered the attention of luxury jewelry brand Cartier, which led the company to have Milinski design artwork for their new flagship store in Sydney, Australia, which is set to open later this year.

“[Working with Cartier] I pretty much have free reign,” Milinski said. “To work for a company, especially a brand like Cartier, and for them to go ‘just do what it is that you do, and there might be a few push-and-pulls later on,’ that was amazing. That’s pretty much how we collaborated together, so it’s really good.”

Milinski has also recently entered the NFT (Non-Fungible Token) market, with his most recent drop being a collection called “Synthetic Cascades,” in partnership with NFT marketplace Nifty Gateway.

“[NFTs] are very exciting,” Milinski said. “It’s just a super unusual thing that happened and it happened really really quick. I believe it’s a massive solution to a problem for digital artists. For so long we’ve been creating and it’s been perceived as being worth absolutely nothing and now it’s worth absolutely everything. It’s so exciting to be part of something where artists are not getting screwed over anymore. So, I love it, I think it’s such a good thing.”

While Milinski is an avid supporter of NFTs now, he admits he was hesitant to get into the market at first.

“It was definitely tricky to get into, because when you’ve never heard of it before and you get a message on Instagram—that’s where I first heard about it, the founder from Nifty Gateway was trying to get me to do a drop—I thought it was a scam multiple times over, until it wasn’t a scam. I wish I had gotten into it earlier to be honest,” Milinski said.

Now, Milinski is also beginning to incorporate his NFTs into the metaverse to make for an even more unique experience for potential buyers.

“There’s another NFT drop as well where the actual NFT itself is the [metaverse] gallery, so you can buy the pieces within the gallery and then the gallery itself,” Milinski explained. “You’ll be able to walk around [the gallery] and talk and you can hover on an NFT and it will tell you information about it. More immersive than just images.”

While the ideas of the metaverse may seem complicated to understand at first, it’s ultimately the natural progression to a more detailed and immersive web experience for users.

“As to what the metaverse is, honestly, it’s just a more immersive experience than what we’re going through now,” Milinski said. “That’s all it is. I just think that the hardware hasn’t caught up to the idea yet […] I think the idea is just to make it all that more immersive. So, if you think about the jump from Web 1 to Web 2, with Web 1, it was just HTML on a screen, and now Web 2, think of the best website you’ve seen; they’re amazing already. So, if you were to tell someone in Web 1 that Web 2 websites are going to look like this, they would be like ‘no way!’ right? So, it’s the same conversation here, it’s just from two to three.”

Naturally, designing for the metaverse comes with a host of challenges due to how much more in depth the end result is than still images created for Web 2.

“It’s 100% harder than just doing a still image, because then I only need to account for the images that are going in that frame,” Milinski said. “When it’s an experience where someone can walk around, it’s essentially a videogame. If you’ve got a video game, you have to make sure the character can’t fall off the edge of something into oblivion. So, you need to sort of cover up all the holes. You need to make sure that the space makes sense. It’s like building a house in real life.”

Despite Milinski’s long hours in front of the computer honing his craft, he’s still looking to connect with people in the real world. For Milinski, this translates into a variety of upcoming projects, including creating furniture designs and continuing to work with Cartier.

“I think, for me, making something physical is a priority,” Milinski said. “I really want to start getting out there in the real world because I’m very much in front of the computer all the time, so it would be nice to see something tangible.”

For more information about Paul Milinski’s NFTs, metaverse project, furniture designs and more, visit him on Instagram @paul_milinski, on Twitter @paul_milinski and on his website milinski.studio.