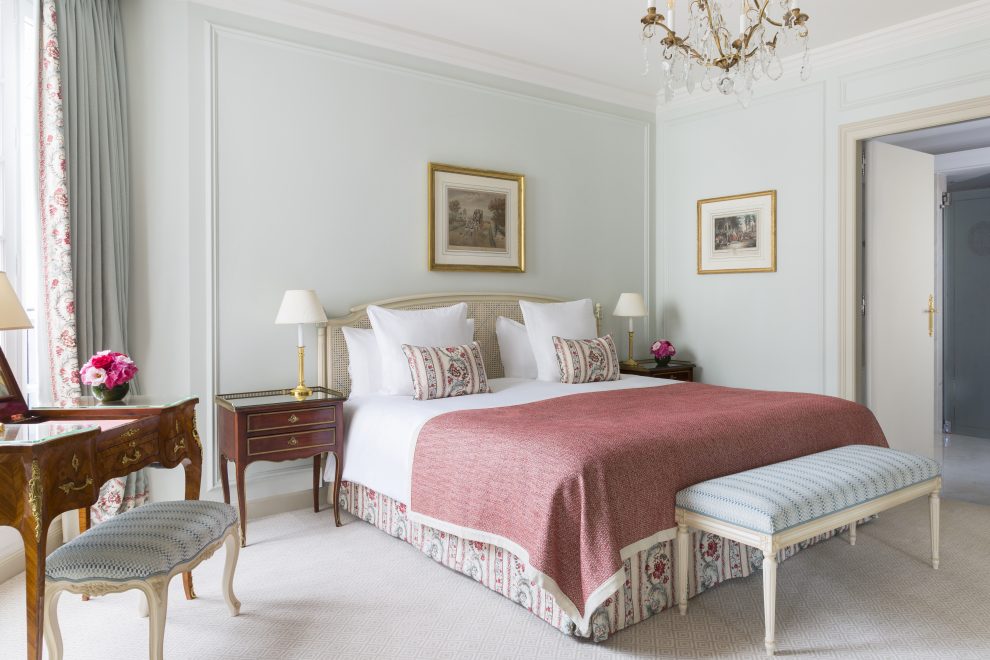 When thinking of the city of Paris, it is impossible to not conjure up images of romance, luxury and elegance. Le Bristol Paris, an Oetker Collection Hotel, is truly the epitome of these classic Parisian ideals. Le Bristol Paris embodies French elegance, with its location on one of the city’s most prestigious streets, Rue du Faubourg Saint-Honoré, and 190 completely renovated rooms and suites all in the heart of Paris. From its outstanding Michelin-recognized dining tradition to its iconic rooftop swimming pool, Le Bristol Paris provides guests with the crème de la crème of Parisian luxury. The hotel’s dedicated staff go above and beyond for their guests, making the hotel truly feel like a five-star home away from home.

From the traditional wrought-iron elevator and plush corridors to the spacious and luxurious rooms and suites, Le Bristol exudes elegance throughout. Le Bristol Paris’ rooms and suites are some of the largest in Paris, often including private terraces or balconies. In addition to 40 Junior Suites, there are two Terrace Suites, each with a large rooftop garden, one of which even has a hidden outdoor spa. There are nine other signature suites including, to name a few: the Paris Suite, which can be transformed into a spacious apartment featuring a steam room; the Panoramic Suite, which was immortalized by the movie “Midnight in Paris” and provides the perfect backdrop for a romantic interlude beneath the Parisian sky; the Honeymoon Suite, which offers panoramic views of the city’s most beautiful monuments (including the Eiffel Tower) and the Imperial Suite, the largest suite in the hotel, which offers views over the hotel’s central courtyard with two bedrooms, a living room and a dining room, and can accommodate up to 12 guests. Nightly rates at Le Bristol Paris start from €1,500 per night.

No matter which room or suite you choose to stay in, prepare to be immersed in the luxury of the best Paris has to offer. Whether you choose to dine at three Michelin-starred Epicure, one Michelin-starred 114 Faubourg or chic casual dining restaurant Café Antonia, your taste buds are sure to be delighted by a plethora of delicious dining options. Le Bristol is also home to the fabulous Le Bar du Bristol, with recently reimagined “Le Bristol After Dark” hours taking place Tuesday through Saturday from 10:00 p.m. to 2:00 a.m. which provide a mix of funky Studio 54 vibes incorporated with the plush splendor of a Parisian Palace. Musical selections aim for a blend of retro and modern, including Italo-disco, ‘80s pop and mainstream hits.

If you’re on the hunt for a tasty treat or a fabulous souvenir, you would be remiss to forget that Le Bristol Paris is also home to a working flour mill and chocolate factory in its basement, meaning guests are never short on fresh bread or gourmet chocolates to enjoy during their stay or to take a little taste of Paris home.

When the bustling streets of Paris have left you in need of relaxation, look no further than Spa Le Bristol by La Prarie, offering eight treatment rooms, a fitness center, manicure room, rooftop pool and beautiful interior garden. The spa is also home to the Kids Club Le Bristol Paris x Bonpoint, a space for children to play as their parents enjoy a treatment. Mini treatments for children are also available, as well as duo treatments for parents and their little ones to do together.

The holiday cheer begins with Christmas trees lining the exterior entryway and leading indoors to a potted pine forest (all lit with eco-friendly candles or LED string lights). The lobby is illuminated by a cascade of 500 crystal pendants draped from the ceiling, with their shimmery beauty reflected on the surface of a mirror-topped central table. The surrounding pines, decorated with gold baubles and white tassel ornaments, feature beautifully wrapped gifts at their bases with a series of handmade Socrate sculptures playing hide-and-seek throughout the scene in an adorable tribute to the hotel’s festive and furry host. Le Bristol’s courtyard garden is also decorated for the holidays, featuring pine trees and an original “Amour toujours” neon light feature, custom created for Le Bristol Paris by calligraphy sculptor Valentine Herrenschmidt.

Triple Michelin-starred Epicure and one Michelin-starred 114 Faubourg have officially announced their respective menus for Christmas and New Year’s Eve dinners. At Epicure, the seven-course menu features wild turbot and Bresse chicken with lobster for Christmas, while New Year’s will offer sole and Alsatian venison, among other delicious creations by Head Chef Eric Frechon. Frechon has also collaborated with 114 Faubourg’s Chef Loïc Dantec and his team a six-course menu around pasture-raised guinea fowl in a chestnut crust for Christmas and, for New Year’s, a young pigeon torte. Each menu will feature a unique and delicate dessert by Le Bristol Paris’ pastry team.

For Pastry Chef Pascal Hainigue, who grew up in Alsace where the Christmas season is elevated to a culture all on its own, the end-of-year period inspires a strong spirit of enchantment and a particular affection for the bûche de Noël — a Christmas ritual at Le Bristol Paris. For his 2022 creation, Pascal Hainigue has departed from the usual use of dark or milk chocolate for a dessert as white as snow. Sculpted with the help of molds handmade by the chef himself for the occasion, the yule log cake depicts seven individually shaped icebergs that a polar bear delicately traverses. Each large iceberg segment is developed in three delicate dacquoise layers with hazelnut and chestnut meringue, sweet chestnut cream filling and calamansi jelly for a hint of tangy citrus. The miniature icebergs are crafted from a smooth base of hazelnut praline.

This stunning, North-Pole-inspired bûche de Noël serves six to eight people and will be available for purchase at L’Épicerie du Bristol Paris from December 20 until December 26 for 130 euros.