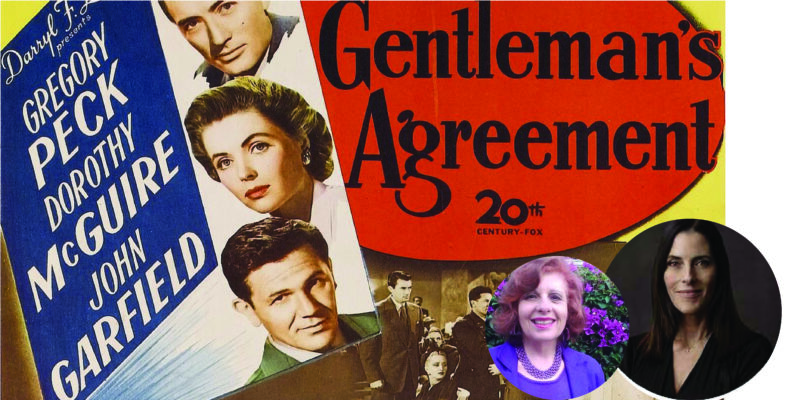 In their presentation “Gentleman’s Agreement: Hollywood’s Stand Against Anti-Semitism,” documentary director Cecilia Peck and film historian Claudine Stevens will bring to life the struggles and achievements of creating the groundbreaking Oscar-winning film. Seventy-five years ago, Gentleman’s Agreement bravely crossed a line to become a critically acclaimed, top-grossing film that exposed antisemitism in New York and Connecticut.

Cecilia will give personal insights into her father, Gregory Peck, and his commitment to the film and the world of cinema. Claudine will discuss the background of the film and reveal inside stories about the adaptation of the screenplay from a novel that had its roots in Nazi Germany and was a protest to actions of the United States House of Representatives.

Cecilia Peck is an Emmy-nominated filmmaker. She is the director, writer, and executive producer of Seduced: Inside the NXIVM Cult. Cecilia’s work has often championed stories of women who speak up in the face of overwhelming challenge. She directed and produced the Netflix Original feature documentary Brave Miss World and the documentary Shut Up & Sing. Cecilia produced A Conversation with Gregory Peck, about her actor father, and was associate producer on Defending Our Daughters. As an actress she was nominated for a Golden Globe award for her role in The Portrait, and played leading film roles in Torn Apart among others, as well as performing on and off Broadway.

Claudine Stevens graduated with a degree in film from San Francisco State University. She lived in Jerusalem for five years, where she worked as an assistant film editor, then as a researcher/manuscript editor at the Hebrew University, where she pursued Jewish and Middle East studies. Upon returning to California, Claudine joined Francis Coppola’s Zoetrope Studios. Later she was in development and post-production at DreamWorks and Twentieth Century Fox studios. Her love of film and her education and experience in the medium led her on an investigative path which helped her create, along with Cecilia Peck, “Gentleman’s Agreement: Hollywood’s Stand Against Anti-Semitism.”