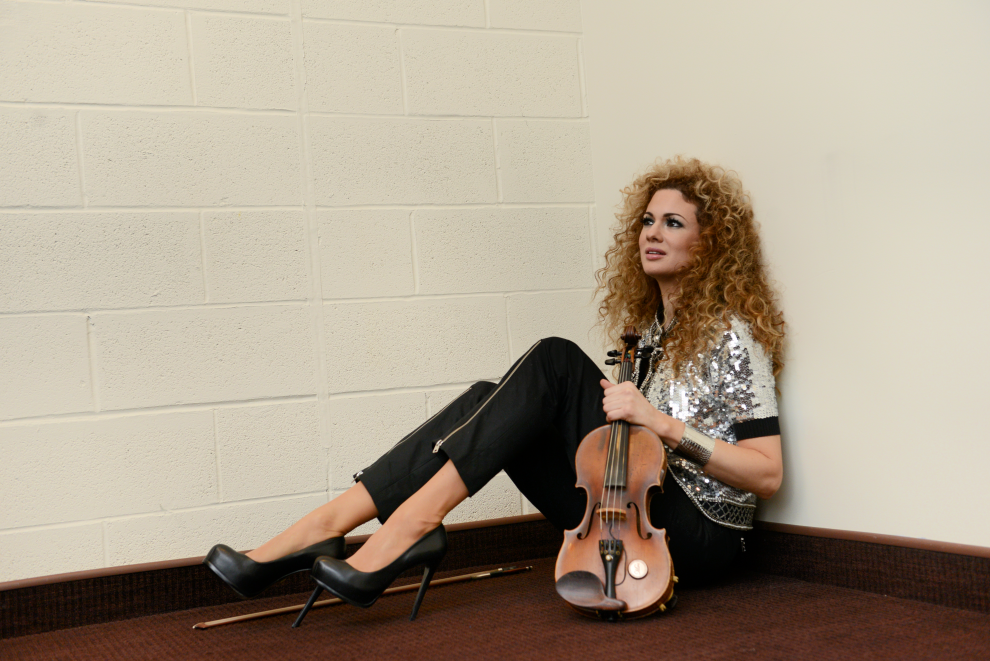 Who is Miri Ben-Ari?

A friend, mother, violinist, producer and entrepreneur. I usually prefer when others describe me.

How do others describe you?

Can you mention some of the artists you have collaborated with? Any favorites?

You have received many awards. Which ones mean the most to you?

All of them and, especially “Apollo Legend,” because this is how my Hip Hop violin career started, “The Grammy Award” because it made the impossible possible. The “Martin Luther King Award” from Israeli President Shimon Peres was a defining moment and the beginning of my unique partnership with Bishop Glenn Plummer. “Remarkable Woman” by First Lady Michelle Obama was another defining moment of performing at the White House, and the “Ellis Island Medal of Honor” by Neco which meant a lot being an immigrant who moved to NY chasing a dream.

I am considered as a “music pioneer” and the first to do many things. I made the impossible possible with a violin, turning it into a featured instrument in commercial music in different musical genres: Hip Hop, Latin, Afrobeats and EDM.

As a music pioneer, how did you change violin music?

I changed the conversation around the violin: instead of being considered as background music, it became a featured artist in commercial music.

How does a girl from Israel get to win a Grammy?

By thinking outside the box, focusing on a vision and paying attention to everything in between. I was not afraid to dare do something new.

You are the only violinist to win a Grammy in the Hip Hop category, can you share what that experience is like?

I won a Grammy and a few Grammy certificates. The Grammy was for the song “Jesus Walks.” I did lots of work on Kanye West’s first album, “The College Dropout” and the album “Graduation.” It was a very happy moment in my career.

What songs do people know you from?

I would say mostly: “Overnight Celebrity,” “Sunshine to the Rain,” “Jesus Walks,” “The New Workout Plan,” “Symphony of Brotherhood Rise,” “Miss Melody,” “Live it Up,” “Baila,” “Jose” and “Intense.” My Spotify account streams many of my violin songs. There are great songs I am on, and people do not realize it is me.

Can you name an example?

I noticed that Twista’s “Overnight Celebrity” is not featuring your name, although you were musically featured. Can you explain?

Evolution does not happen “overnight.” It was my first music video, and everyone knew it was me on this song, but the title did not include both Kanye and me.

Can you share some highlights of your music career?

My first performance at the Apollo, which started my Hip Hop career and honored me with “Apollo Legend,” jamming with Jay-Z at Summer Jam, receiving the “Remarkable Woman” award from First Lady Michelle Obama, introducing “The Hip Hop Violinist” to the scene, creating “Intense” with Armin Van Buuren, “Jose” with Aventura and “Symphony of Brotherhood Rise” with Flo Rida while featuring. Dr. Martin Luther King Jr.

Whatever I do, I thrive on giving a quality entertainment experience. My live show has multimedia and it’s full of energy.  The shows are different and according to the venue: from ticketed shows to a nonprofit gala, fundraising, private or corporate events. I could play the National Anthem with the NBA and perform at halftime with its dance team.

Tell me about “The Hip Hop Violinist?”

It was very challenging initially because my music project concept did not exist before my time, and there was no reference point. Jay-Z and Wyclef Jean gave me the title “The Hip Hop Violinist,” which became my brand and my self-titled album on Universal. It opened the door to introducing a new style: a fusion between the classical and the non-classical worlds in commercial music. My violin album featured artists like John Legend, Kanye West, Anthony Hamilton, Fabulous and Lil Wayne. After that, it became easier, and many musicians followed in my footsteps.

Being third generation to grandparents who survived the Holocaust: how did it impact your life and career?

It is a part of who I am. When I was 12 years old my grandparents broke their silence and shared their story with me. As horrified as I was, it gave me a “purpose” of the value to “never forget” their stories, and the Holocaust.

Tell me about your TED Talk experience?

It was a COVID project; I felt that I had ideas worth sharing and managed to do two TED Talks: “How to Make the Violin Cool” and “4 Ways to Strive with Harmony.”

Why did you choose these TED Talk topics?

Both are my life stories and lessons. “How to Make the Violin Cool” teaches how to think outside the box to succeed in life and in business. “4 Ways to Strive with Harmony” is all about healing our divided society with music.

Does being a TED speaker change who you are?

It connected me with who I am; it helped me to better understand my essence and contribution by sharing my story.

Did you get to deliver TED Talks outside of the TED platform?

Yes, I have. I speak to fortune 500 companies to help them think outside the box and to get creative and inspired in business.

How do you feel about the recent rise of antisemitism?

It is very unfortunate; it is dividing the communities and creating unhealthy conversations.

People always tell me they can recognize my violin playing on songs, and I think it might be a combination of sonic and my soul.

Tell me about your recent collaboration with Diamond Platnumz.

We created the first Afrobeat song to feature violin, “Baila.” I love Afrobeats and loved working with Diamond. I hope to travel to Tanzania soon.

You released “Symphony of Brotherhood Rise” featuring Dr. King and Flo Rida; how did this song come about?

It was an organic music production that started with the instrumental of “Symphony of Brotherhood.” Erik E. Smooth Hicks created a gospel choir, and Flo Rida created his classic verse. Honestly, I didn’t expect Flo Rida to perform on a song like this, but then I got to know him, and it all made sense. We are a unique music combination; together, we are “a symphony of brotherhood” carrying Dr. King’s message.

Could you tell me about your entrepreneurial world?

I am from Israel, a startup nation, and I love technology. During COVID, my partners and I founded a technology company Meta-Sured, providing cyber solutions and products to Web 3 blockchain-related technology.

Should we expect another TED talk about this new venture?

How did motherhood affect your career and music?

Being a mother changed everything. It is an experience that you cannot put into words. It taught me a lot about love.

What’s coming up for you?

I look forward to sharing many exciting projects soon, focusing on music, film and technology. Follow me on miribenari.com and visit @miribenari for more!