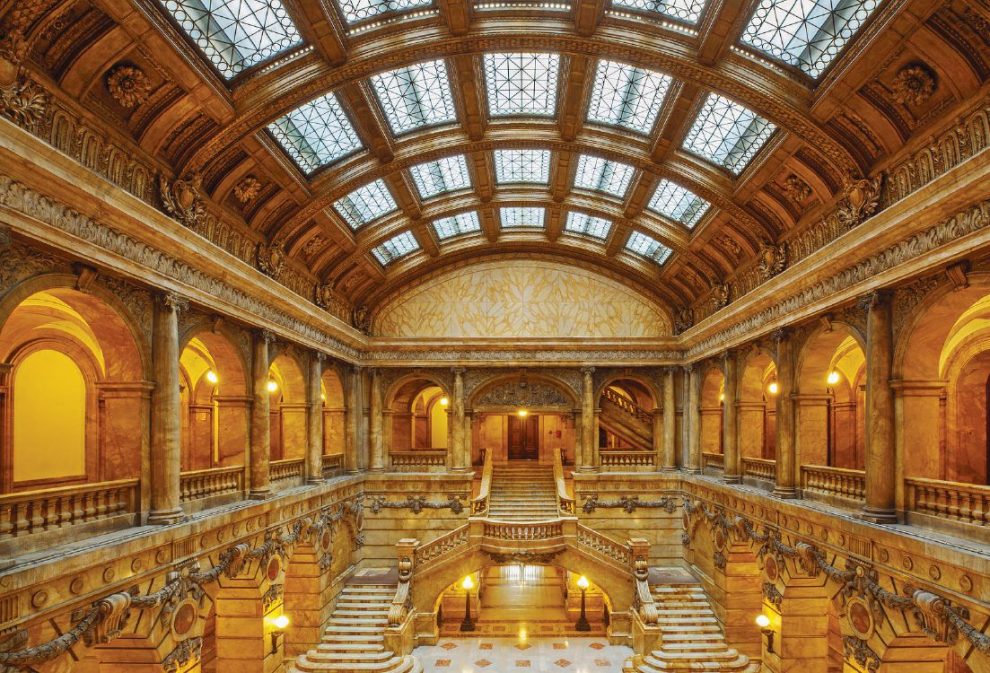 It isn’t easy to illuminate a courthouse — especially one that’s a landmark. The replacement and restoration of the historic skylight within the landmark Manhattan Surrogate’s Courthouse has received a 2020 Lucy G. Moses Preservation Award from the New York Landmarks Conservancy, the organization’s highest honors for preservation excellence. The team for the complex project included Urbahn Architects, the New York City Department of Design and Construction (DDC) as program manager, owner New York City Department of Citywide Administrative Services (DCAS) and historic conservator Jablonski Building Conservation (JBC).

Designed by R. Thomas, then one of the most sought after architects of public spaces, and completed in 1907, the seven-story Beaux-Arts structure encompasses an entire block in downtown Manhattan, bounded by Chambers, Centre, Reade and Elk Streets. The building holds the city’s municipal archives and features ornate courtrooms for New York County’s Surrogate’s Court on the fifth floor. The interior and exterior are both New York City Landmarks. The building was also placed on the National Register of Historic Places in 1972 and designated a National Historic Landmark in 1977.

The opulent three-story atrium features a 40-foot by 60-foot skylight that soars overhead, allowing natural light to flood in, illuminating the rich and highly articulated interiors. The Paris Opera purportedly inspired the skylight — when the court building was completed, it was called the most Parisian structure in New York. The monumental atrium space, which leads to upper-level balconies, features a double staircase of Tuscan marble imported from Siena, Italy.

The skylight was fabricated just a couple of dozen blocks north of the building itself, in Chelsea. The original skylight monitor consists of two separate glazed assemblies with an interstitial space in between. The outer assembly faces the sky and provides protection from the weather. The interior glass layer, or “laylight,” is seen by the public from within the atrium and is treated in a highly ornamental fashion. In addition to its visual function, the laylight provides code-required occupant protection from potentially falling glass. The monitor that projects from the roof is gable-shaped, with glass panels originally supported by a copper frame structure with a ridge at its peak. Ten clerestory windows are on the vertical sides where the skylight drops to a walkway that stretches around its perimeter. The walkway extends along the built-in gutters at two sides and consists of hexagonal glass block set within cast-iron panels. The laylight within the atrium is comprised of hundreds of translucent glass panels set in an ornamental bronze-clad cast iron frame, forming a monumental barrel vault.

Based on Urbahn’s design, the renovation team removed the entire outer monitor system and replaced it with a new copper-anodized aluminum frame to emulate the original copper frame cladding. The team oversaw the fabrication of a new aluminum frame to hold the glass panels. Several new copper elements were fabricated to match the originals, including leaders, gutters and a ridge vent replicating the original ornate rope motif. For the laylight, Urbahn and JBC developed a procedure that called for removing the glass panels to facilitate the restoration of the leading that holds the glass in place, as well as provision of new glass to replace missing or broken panes. The bronze cladding was stripped of all coatings, cleaned and refinished in situ.

The design team addressed the inherent vulnerability of the glass block walkway to water infiltration by designing a new protective assembly, including laminated glass protecting the glass blocks, with new durable aluminum panels as a walking surface, all within a new metal frame system. The team replicated the original hexagonal glass blocks, with groups of blocks forming a total of 24 glass panels running on two sides of the skylight.

“Working within a cherished historic edifice such as Surrogate’s Court required a team that is attuned to the aesthetics, materials and building practices of another age, as well as well versed in both the limitations and advances of modern construction technologies,” said Rafael Stein, AIA, an Urbahn principal. “For example, the two lunettes on either end of the atrium had been so damaged that it was nearly impossible to understand what they had once looked like. Our research revealed that there had in fact been different decorative layers over time. We selected the most recent iteration and developed a restoration approach based on review of archival photographs and an analysis of multiple paint and plaster coats. We then carefully specified the design so that the lunettes could be lovingly restored by experienced artisans.”

The team will accept the award at the 30th Anniversary Lucy G. Moses Preservation Awards Gala, to be held at The Cathedral Church of Saint John the Divine in Manhattan.

Nobu Hospitality to Launch a Hotel and Restaurant on the Stunning Island of Santorini, Greece