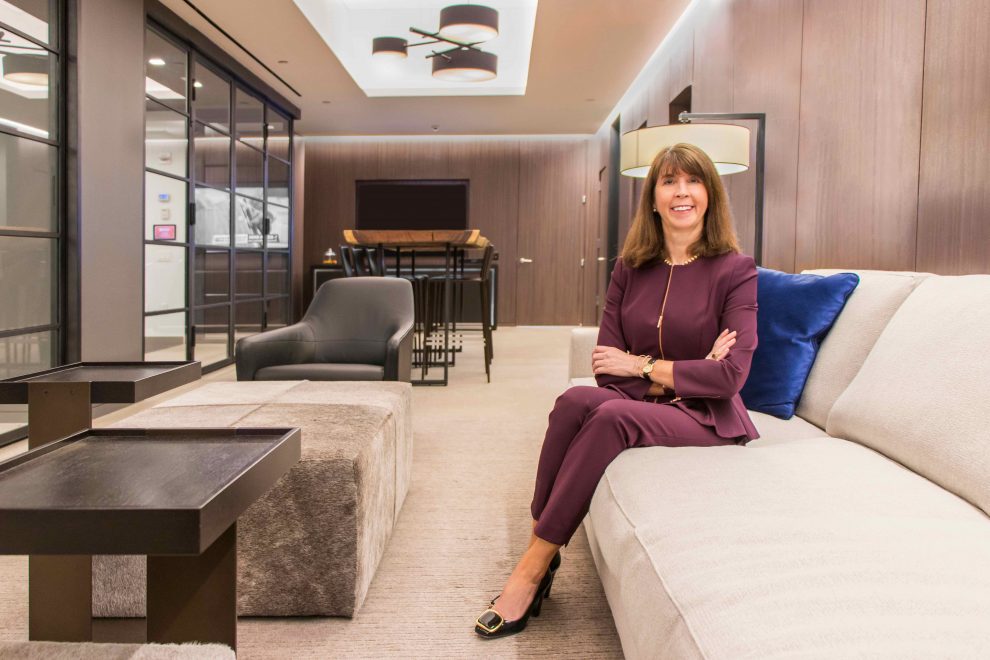 Not every successful career follows a carefully planned career path, and Alison Lewis, Newmark’s chief administrative officer, readily admits she never really had one. But don’t equate the lack of a pre-ordained path with a lack of determination. Some follow trails; others forge them.

Lewis’ college and professional careers are case studies in seizing opportunities and taking the initiative. In college, she parlayed babysitting the children of an HBO executive into an internship at the company.

“He was a head of network operations and asked me if I wanted to be a summer intern. Of course, I said ‘Yes’ — who wouldn’t want to be at HBO?” Lewis recalled.

The executive was able to deliver on the opportunity the following year. As is the case with many interns, Lewis was given no real guidance or responsibilities.

“They put me in somebody’s office who had left or was fired, but their mail just kept coming in. And I thought, well, I guess we’ll find out what this person did and started doing their job,” she recalled. “What I learned there was how to be a self-starter. You don’t wait for someone to tell you what to do; you figure it out.”

Asked what she learned through her internship and she quickly answers, “I’m not a status-quo person.”

A 30-plus-year career trajectory characterized by change and relentless upward progress backs her up. As for what’s motivated her throughout that career, Lewis said she’s a student by nature.

“I always put myself in a position to learn. Before I became CAO at Newmark, I switched jobs every three years or so. I would take what I learned at one job and leverage it into an opportunity either within a different area of the same company or with a new organization altogether,” she noted. “I love that motion forward. Without it, I get bored.”

Boring is not a word that describes her portfolio as CAO. It’s broad and deep, encompassing everything from the firm’s recent re-branding initiative and digital transformation to the day-to-day operation of nearly a dozen lines of business. Beyond that, Lewis heads Newmark’s business process improvement efforts and plays a prominent role in ensuring Newmark’s company culture attracts and retains high-level talent.

“I’m in a position to affect the culture at Newmark and to impact it positively; there has to be a connection, a set of common values shared by everyone in the organization. People have to want to follow you,” she says. “I thrive on change and transformation, so I hire people who are very good at what they do now but who are always looking to make themselves better.”

Building Transferrable Experience
Lewis didn’t make a move to commercial real estate until about 15 years into her career. Until that point, she’d worked in media, at Sports Illustrated and Time Warner, and in finance, with Citibank, in roles as divergent as network planning, video production, business development, marketing/promotions and online brand support. One common thread running throughout, though, was a focus on leveraging new technologies in business development.

“I would attribute a lot of my success to understanding how to transfer skills,” she said.

In 1999, when she was introduced to CRE, Lewis didn’t know anything about the industry, but she was referred to the owner of a real estate services company interested in understanding how technology was going to impact CRE.

“That was an expertise I’d developed in previous jobs. I could bring that to the table and apply what worked in one industry to another,” she said. “I gave my advice and thoughts on where the industry was going and what he should do, and he offered me a position.”

Paying It Forward
In the 20-plus years since, the last eight at Newmark, Lewis has risen to the highest level of executive leadership in CRE. She’s gotten there, in part, by paying attention to women at the top.

“In CRE, I’ve learned that success isn’t gender-related; you just have to set your self-expectations very high, work exceptionally hard to achieve them, leave nothing up to chance and always present the best version of yourself,” she added.

CRE has been a historically male-dominated business, but Lewis sees an industry that rewards diversity.

“I’ve worked for a lot of blue-chip firms in other industries, and the people who succeed there usually fit a specific profile: the schools they go to, the clubs they belong to,” she observed. “That’s not the case in CRE. There are so many different types of personalities that succeed; you can be street-smart, book-smart, Type A or Type B; it doesn’t matter. You have to understand your personality and find the right niche within the industry. I happen to be a very social person and love engaging with different people, but not everyone’s like that.”

Now at the pinnacle of her career, Lewis is more invested than ever in mentorship and facilitating others’ achievements. She characterizes herself as a generalist, hiring and leading specialists who have deeper expertise than she does in particular areas. She offers them the ability to remove business impediments and encouragement to advance their proficiency further.

“As I have grown older and in an executive role, I find great satisfaction in helping others overcome business challenges and achieve their goals,” Lewis continued. “I take a tremendous amount of pride in the people I work with and in helping set the stage for their success.”

Lewis has forged her own successful career path with the help of mentors, certainly, but she’s also applied lessons she began learning about business and about herself as a summer intern.

“Since that first job, I’ve always watched for opportunities and reinvented myself to capitalize on them. CRE is a dynamic and competitive industry, so you always need to be at your best,” she said. “I learned early that you have to be willing to challenge yourself, to figure it out. Then you can sell yourself into the next position. Those lessons have served me well for 30 years.”