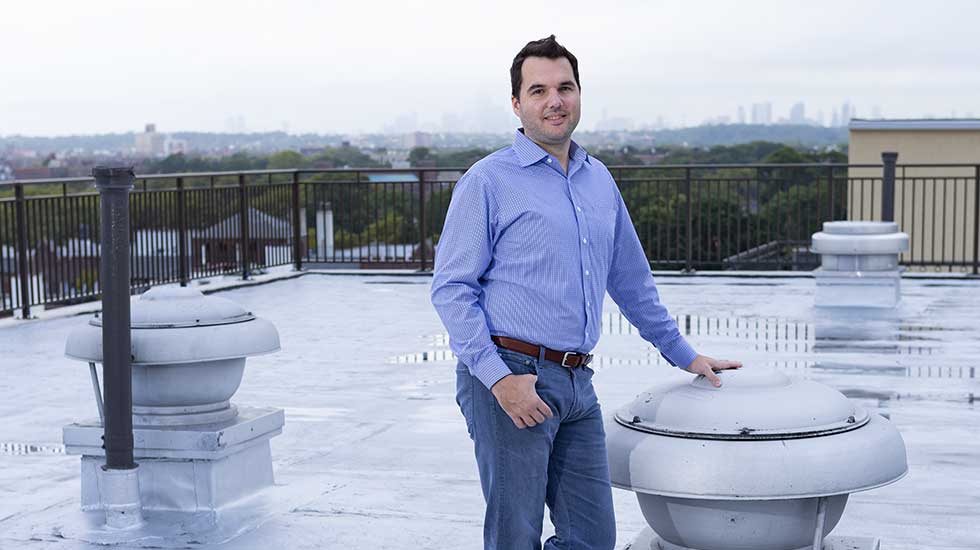 As the fourth-generation president of M&R Management, and the newly minted president of the Community Housing Improvement Program, there’s a lot on Zachary Kerr’s plate right now. But that’s nothing new when you’re operating multifamily and commercial properties in M&R’s native Brooklyn.

“Our tenants are not looking for anything fancy, but they expect everything to work. They expect you to be compliant with the digital age, with a video doorman, high-speed internet, and WiFi in the common areas,” he said. “We have great tenants. The economy goes up or down, and they continue to pay their rents. Our occupancy is always high. We do our best to operate the business as if our tenants are part of the extended family—without them we don’t exist.”

Kerr’s great grandfather Meyer Berfond, an immigrant from Russia, started his business as a painting contractor and quickly saw an opportunity in post-World War II Brooklyn.

“During that experience, he learned the construction process,” Kerr said. “Remember at that time there was a tremendous amount of land available, and there were subsidies for new development because of the housing shortages following the war. He was a bright guy; even though he couldn’t really read or write English, he bought his first piece of land in the 1940s, and started developing residential units, some of which we still own today.”

In less than 20 years, Berfond had assembled a portfolio of more than 5,000 units, which he managed until his death in the 1980s. Though Berfond’s children didn’t join the business, grandson Michael Kerr (Zachary’s father), then working in Ft. Worth, TX, with Tandy Brands as president of the Bombay Company, a chain of home furnishings stores nationally, returned home to New York and M&R to take over the portfolio, which was beginning to show its age. At one point, the family considered selling it.

“Dad determined it was worth moving to New York and focusing on the real estate,” Kerr said. “He spent a lot of time modernizing the fleet, selling off some of the assets and bringing everything up to a high-quality standard. Ironically, while he did have some exposure to real estate growing up, his father was a surgeon, so his dinner table talk was more about medicine.”

As he restored the buildings, Michael also modernized the business to improve tenant services. Zachary, on the other hand, grew up hearing about the industry, and originally planned to be an architect.

“I was fascinated with the design side, so I studied architecture at Tulane,” he recalled. “But I didn’t like the practical aspects of it, dealing with the real-world issues and controls imposed by zoning and the developer.”

He transferred to the business school, and after graduation went to work for Glenwood Management, learning the ropes as they constructed a 51-story apartment building. After three years there, his father brought him into the family business, running a roving construction crew working on various capital projects.

“I had interned with M&R over the summers, so I had a good sense of the company,” he said. “It was my job to oversee vacant apartments, schedule trades, and order materials. From there my dad slowly began to spend less time in the office and I spent more time. And I gradually assumed his role.”

With his father’s modernization program pretty much complete, Zachary also began to look at expanding the portfolio. M&R had recently sold its only building in Manhattan, freeing funds for new construction.

“We developed a four-story medical building. That experience had its issues, but we learned a tremendous amount, which we then brought to developing an eight-story, 51-unit apartment building, which came online in 2010,” Kerr said.

The plan after that was to let the apartment building mature for five years or so and then develop another. But the dramatic rise in residential real estate prices and other circumstances got in the way. Independently, Kerr acquired a development in the Bronx, but sold it several years ago, as he preferred to work closer to home.

“When I needed to go up there, it was time-consuming. I realized that if we were going to develop, it made sense to do it in neighborhoods we had a presence in. And other development just never happened,” Kerr said. “Development has become much more complicated, and operating a management company takes a lot of time and attention. We have to devote much more time to compliance and cost management, and tenant issues are more complicated today. Hopefully, there will be development opportunities in the future.”

The challenge today is serving this more sophisticated tenant, while adhering to ever increasing regulations and legislation. Kerr notes that he devotes “substantially” more time to these issues than 10 years ago, and the costs associated with them are much higher.

“I live in someone else’s building. I know the problem of having problems in your apartment,” Kerr said. “I do my best to get on the level of our residents and provide the best possible accommodations we can. Knowing that we do our best makes it easy to sleep at night.”

Kerr is not the only Berfond descendant running the company, which today boasts a staff of 50. Just as Michael Kerr worked with his sister Carol Harrison decades ago, Zachary Kerr’s cousin Pamela Ludwick is his partner in crime.

“She is fantastic. Pam is to me what Carol was to my dad, providing the support needed to expand the business and propel it into the future,” he said. “She is there working by my side, involved in all the important decisions.”

That help will also be important as Zachary takes on the presidency of CHIP after nearly a decade as its treasurer and more than 20 years as a member. Interestingly, his father Michael also served as the president some 30 years ago.

“CHIP is a great organization. It’s all about owners helping owners,” he said. “It’s always been the first place I’ve turned to, even before calling my attorney, when I have a question related to management. When they were looking for a president, I wasn’t thinking of the position, but someone asked me to do it, and this is a great opportunity. There’s a lot going on.”

And a fifth generation may eventually come on board at M&R if Ludwick’s teenaged sons or Kerr’s 3-year-old daughter show interest in the business.

“Between Pam and me, I hope they will take over the business,” Kerr said. “I know how special it is to be given this legacy.”