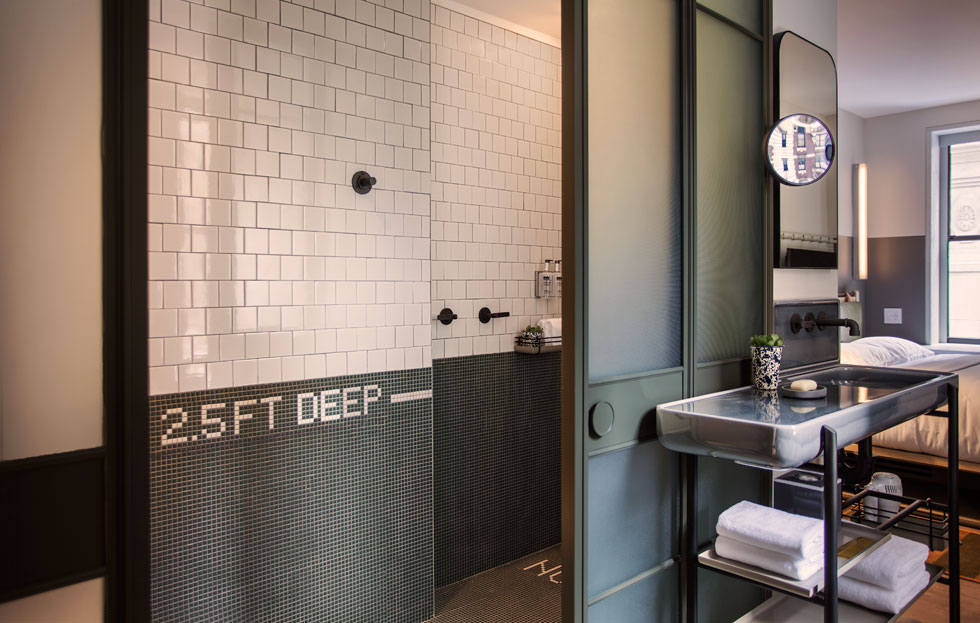 A Star Team of First-Time Collaborators Combine the Art of Playfulness, a Personalized Experience, and Cutting-Edge Design

In a debut that’s as provocative and confident as its name suggests, Moxy Times Square’s opening represents a disruptive shift in scale. Transforming a historic building into a dynamic, design-driven hotel, the property is welcoming, surprising, instantly comfortable and—with 612 bedrooms and over 22,000 square feet of flexible event space—remarkably intimate. Formerly the New Mills Hotel, built in 1907 in Midtown on 36th Street and 7th Avenue, Moxy Times Square proves that affordability doesn’t have to mean a sacrifice of style or comfort.

The developer of Moxy Times Square, as well as five other Moxy properties planned for New York City, Miami, and Los Angeles, is Lightstone one of the largest and most diversified privately held real estate companies in the United States. To bring Moxy to life in New York City, a star team of collaborators was formed: Yabu Pushelberg for the design of the bedrooms, lobby and second floor public spaces, TAO Group to cultivate the food and beverage program, Rockwell Group to design the restaurant and bar spaces, and New Stand to run retail operations. Thanks to the collective ingenuity of these partners—each a disruptor in its own space—Moxy Times Square exudes a vibrancy that contrasts with the lackluster efficiency of other affordable hotels.

From the moment guests enter the hotel, Insta-worthy moments of cheeky fun are brought to life through Moxy’s thoughtful and thought-provoking design. Instead of the traditional hotel lobby, guests check in with a crew member at dedicated kiosks—if they haven’t already accessed keyless entry through the Marriott Mobile App. Just beyond check-in is the Moxy Digital Guestbook, streaming videos, and images taken within Moxy hotels or tagged #atthemoxy for visitors’ pre-elevator amusement.

Making their hotel debut is New York’s favorite hybrid retail and media concept, New Stand, a New York–based chain of boutique convenience stores reimagining what the modern day newsstand should be. Rather than just magazines and newspapers, the shop offers guests everything from a toothbrush to a mini-piñata. Post check-in, the Moxy experience begins. Thirsty travelers head straight to Bar Moxy in the second floor lobby lounge to enjoy a welcome cocktail, on the house. Serving as the social heart of the hotel, Bar Moxy has a magnificent copper-wrapped bar at its center and is flooded with natural light during the day, thanks to the dramatic, triple-height atrium skylight. On one side, the plug-and-play lounge offers flexible seating areas and power outlets galore for co-working. There’s even a DJ booth to take the vibe from day to night. On the other side, divided from the bar area by sliding, copper-framed glass doors, are three “studios”—flexible, multi- purpose rooms with state-of-the-art AV equipment that can be combined for meetings, events, or private parties. Behind the bar, in a greenhouse-inspired space, is The Pickup, a twist on the traditional grab-and-go concept.

Magic Hour is designed to change the NYC rooftop game. The emphasis isn’t on velvet ropes or bottle service. “We need it to be attractive to locals, of course, but also comfortable for people visiting from Denmark or Delaware,” says TAO Group Co-Founder Noah Tepperberg. “We made Magic Hour more about attitude than exclusivity. If you’re here to have fun, no problem!” Upon entry, a dark and mysterious lobby with a giant funhouse mirror leads to five distinct environments. The gallery-like entrance hall features whimsical topiary animals in naughty positions, a feature designed by TAO Group. A small interior lounge has a sexy urban-industrial vibe, with wire mesh panels riveted to the ceiling and walls. There are two separate outdoor areas: the east side, overlooking the Empire State Building, has elegant garden-party fixtures, while the west is more overtly carnival-esque, with one seating area located on a rotating antique carousel. Tucked into a corner is what’s bound to be the hotel’s most Instagrammed feature: Foreplay, a miniature putt-putt course designed by TAO Group that, instead of windmills, has follies of colossal-size animals in compromising poses. Magic Hour’s menu will include modern takes on State Fair classics from lobster rolls and baby back ribs to Dippin’ Dot shots and ice cream sandwiches along with a list of decadent cocktails. A unique and cheeky addition to the menu is the option to book one of the hotel’s $99 Crashpads – meant for those who may have had a few too many rounds on the carousel or simply don’t want the night to end.

“Moxy pushes the envelope, so we tossed out the rulebook,” said Toni Stoeckl, global brand leader and vice president, Marriott International’s Distinctive Select Brands. “Together with Lightstone, we set out to create a new paradigm within the New York hotel scene by bringing together the best-in-class in design, food and beverage, and retail and giving them the freedom to allow their imaginations to run wild. The result has been a hotel experience like no other—fun, edgy, playful, and all at a killer price.”

Creating a new paradigm for the modern traveler is what Moxy Times Square is all about. “Travelers’ needs are rapidly evolving, and the hotel industry is still playing catch-up,” said Mitchell Hochberg, president of Lightstone. “With Moxy Times Square, we wanted to create something that fulfills the modern traveler’s desires—that, after all, is what really defines hospitality today, more than gratuitous services or frivolous amenities. Today’s travelers don’t need a newspaper at their door, or a mint on their pillow. They want to be engaged by unique experiences that create a sense of place. We believe a hotel can do all that while remaining accessibly priced—and never sacrificing on style or comfort.”

The opening of Moxy Times Square marks the brand’s 15th hotel opening, and the first of five Moxy hotels planned for New York City. This year the brand is expected to open ten additional hotels located in Berlin, Frankfurt, Seattle, and Tokyo, among others.