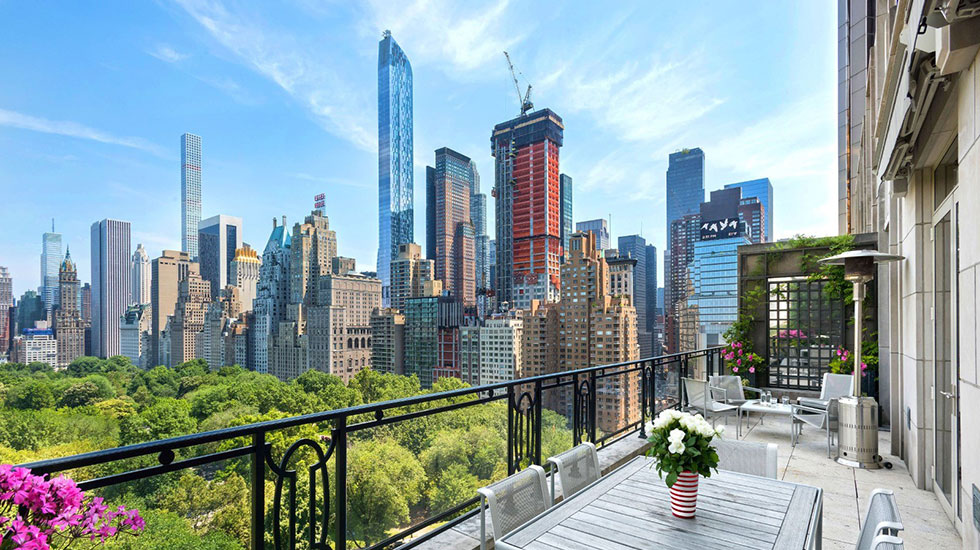 Located conveniently in Columbus Circle near Lincoln Center for the Performing Arts, 1 Central Park West is one of the most successful developments in the Trump portfolio. A world-class hotel occupies the lower 22 floors of the 44-story building, while private residences in the upper levels feature floor-to-ceiling windows, 10-foot ceilings, walk-in closets, hardwood floors, marble baths, and modern kitchens.

Residences have direct and protected views of Central Park, creating high-demand and a hefty price tag. Prices have dropped over the past year since occupying office, but the building currently averages $3,051 per square foot and a five-bedroom condo is set at $19.9 million.

With sweeping views of Central Park, it’s no surprise this Art Deco-inspired residential building gained not only popularity, but also landmark status back in 1988. Located on the Upper West Side between 71st and 72nd streets, the twin-towered skyscraper features open, flowing layouts with oversized windows that let in natural light and park views.

The building houses a health club, bike room, and garden, so residents can maintain optimal health. Currently, the price per square foot is set at $3,980, while one if its coveted penthouses went into contract earlier this year at $19.5 million.

Built in 1930, 834 Fifth Avenue has become one of New York City’s most prestigious co-op buildings for its long list of high-society tenants who have previously called it home, such as Rupert Murdoch, Elizabeth Arden, and Laurance Rockefeller. In 2016 the building listed a co-op for $120 million, the most expensive listing in NYC at the time.

The building features a limestone-clad façade, art deco details, and a courtyard garden, in addition to incredible views of Central Park. Currently the price per square foot is $6,333, and a seven-bedroom, seven-and-a-half-bathroom co-op is priced at $76 million.

A Robert A.M. Stern-designed building, 15 Central Park West is comprised of two limestone towers and features 202 one- to four-bedroom residences. The residences offer multi-directional views of both the city and park, and kitchens and bathrooms feature top-of-the-line appliances and deluxe fixtures.

Located near Columbus Circle and Lincoln Center for the Performing Arts, the building boasts an average $4,863 price per square foot. Amenities include a 24-hour doorman, private dining room and library, screening room, health club, and pool. A four-bedroom, four-and-a-half-bathroom is listed at $25.5 million.

Designed by Schultze & Weaver, The Pierre Hotel at 795 Fifth Avenue was completed in 1930 with 714 rooms, but in 1959 a renovation created 77 cooperative apartments. Now, the building has 140 rooms and 49 suites, in addition to its co-op units.

Combing hotel living with everyday living, residents who reside at The Pierre consider it to be the crème de la crème of New York society and living. Currently, a five-bedroom, five-bathroom residence is listed at $60 million.