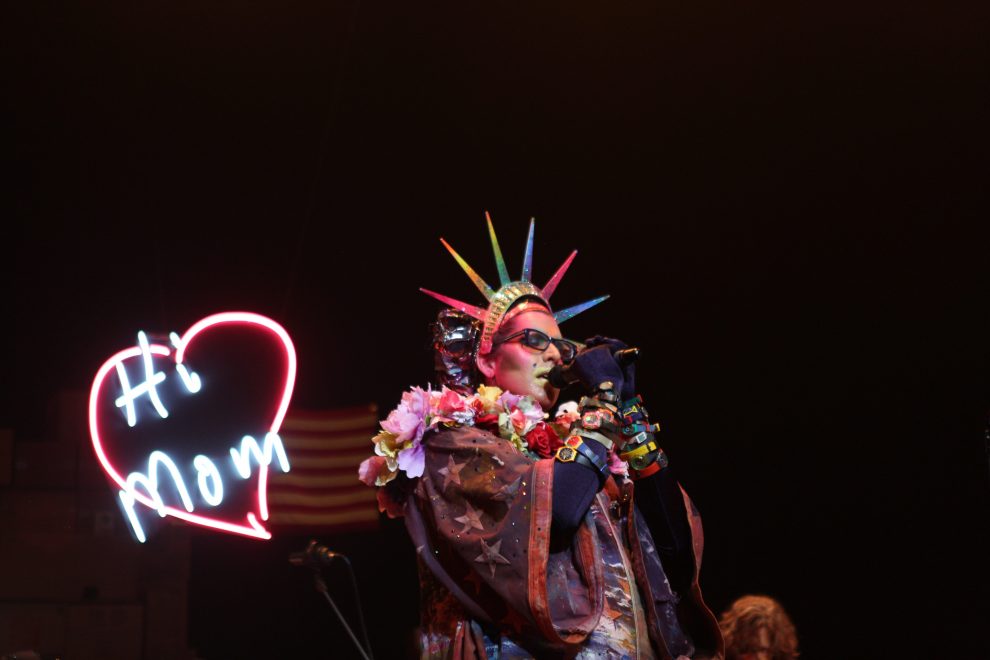 Works & Process, the performing arts series at the Guggenheim, presents “Treasure” by Machine Dazzle, made-to-measure for the Frank Lloyd Wright-designed theater at the Solomon R. Guggenheim Museum on the occasion of New York Fashion Week.

Distant dreams come full circle in this Works & Process commission of multidisciplinary artist, maximalist, and 2018 New York City Village Halloween Parade Grand Marshall Machine Dazzle. Undressing layers of his past to make sense of the present, Machine Dazzle will introduce new looks inspired by his original songs and stories written for “Treasure.” Machine Dazzle will be joined on stage by Music Director Viva DeConcini and musicians brought together especially for this collaboration.

Conceptualist-as-artist meets DIY meets “glitter rhymes with litter,” Machine was a co-recipient of the 2017 Bessie Award for Outstanding Visual Design and the winner of a 2017 Henry Hewes Design Award.

“Treasure” by Machine Dazzle is commissioned by Works & Process at the Guggenheim with support from Pomegranate Arts and a creative residency at LUMBERYARD.

Viva DeConcini plays guitar like a flaming sword, a screaming train, a ringing bell, and a scratching chicken. She sings like if Freddy Mercury had been a woman. She is influenced by diverse artists and styles including Jimi Hendrix, Dolly Parton, NYC, disco and jam band music, and has played everywhere from Bonnaroo with Cyro Baptista to Monterey Jazz Fest with Peter Apfelbaum. She has produced sell out music, burlesque and variety shows at The Slipper Room and Joe’s Pub and is one of the few females to be featured in Guitar Player Magazine. Viva moved to NYC in the 90’s and began performing with legendary downtown Brazilian Percussionist Cyro Baptista’s innovative funk theater/band Beat The Donkey. After ten years and hundreds of shows, Viva left Beat The Donkey to pursue her own music. In 2008, that music came to fruition in the form of “Electric Cabaret”, a burlesque-fueled album, critically lauded for the front woman’s stand-out guitar. Her second record “Rock & Roll Lover” (2010), charted on CMJ and she was hailed by Vintage Guitar Magazine as having written some of the best rock songs in a decade.  In 2011, Viva made her NYC theatrical debut as the musician in Taylor Mac’s play WAAFME, which the The New York Times hailed as one of 2011’s ten best.