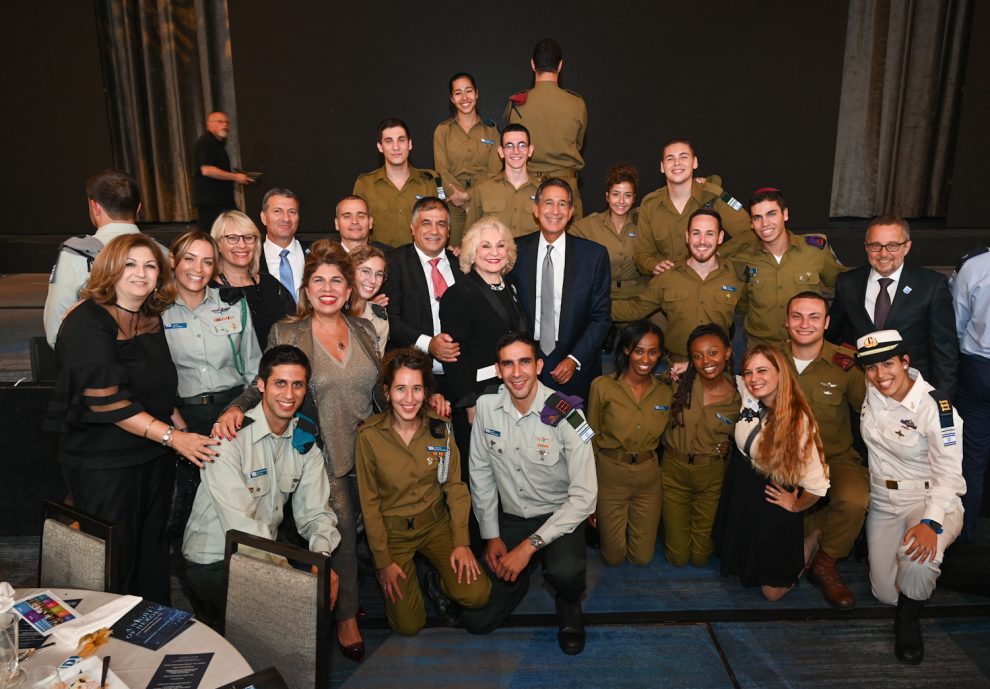 The FIDF National Gala, “A Night of Heroes,” took place at the New York Hilton Midtown and featured active-duty IDF soldiers and other special guests. A delegation of 20 IDF soldiers and officers attended the gala, including soldiers who volunteered to serve Israel proudly despite not being required to do so due to their backgrounds and special circumstances.

Among them was Cpl. Sofie, a Danish Lone Soldier – one who enlists in the IDF without having immediate family in Israel — who was raised as a Christian, though her Jewish father served in the IDF. She is one of the few women to serve as an F-35 jet mechanic in the Israeli Air Force (IAF). Other soldiers included Lt. A., a Lone Soldier from East Jerusalem whose decision to join the IDF, which he viewed as his patriotic duty, cost him his family, friends, and home, though he is now realizing his childhood dream of being an IDF officer and is excited about his future. Others included Staff Sgt. Aaron, a Lone Soldier from New Jersey who serves in the Paratroopers Brigade; Sgt. Eitan, an Israeli Orthodox combat soldier serving in the Givati Brigade, which primarily performs anti-terror operations; and Maj. Yossi, who was a commander in a combat engineering unit operating inside the Hezbollah tunnels into northern Israel.

The gala also featured the generational story of a family of heroes, stretching from the Six-Day War to modern Israel.

“The brave men and women who wear the IDF uniform passionately protect not only the Jewish homeland, but people all over the world,” said Klifi-Amir. “More than simply a military defending the state of Israel and Jews worldwide, the IDF is an extraordinary force of humanity. Guided by its official ethical code, the Spirit of the IDF, which holds human life above all else, Israel’s soldiers are true global heroes who go above and beyond the call of duty: they save lives, tend to the needy, care for the wounded, and help whomever is in crisis. They are the faces of the diverse Israeli nation, and as Israel’s first Prime Minister David Ben-Gurion once said, the IDF is the melting pot of the Israeli society. We are extremely proud to support these heroes who carry out the most noble mission.”

For the fifth year, Rabbi Weintraub chaired FIDF’s flagship national event. A Reform rabbi and businessman from Westchester, he has remained an avid FIDF supporter for over 18 years and sponsored academic scholarships for more than 85 IDF combat veterans through FIDF’s IMPACT! Scholarship Program.

“The heroes of the IDF serve and protect the state of Israel, its people, and Jews around the world,” said Rabbi Weintraub. “During this very special evening, our community was able to come together to pay tribute and show the brave IDF soldiers our profound appreciation and thanks for their sacrifices. We stand together with these young Jewish heroes — our heroes — and declare: while their job is to look after Israel, ours is to look after them.”

Funds raised at the gala will provide much-needed and well-deserved services such as academic scholarships to combat veterans, financial assistance for soldiers in-need, support for Lone Soldiers throughout their service and upon release, crucial aid for wounded veterans and the families of fallen soldiers, weeks of rest and recuperation for entire IDF units, as well as educational, cultural, and recreational facilities.