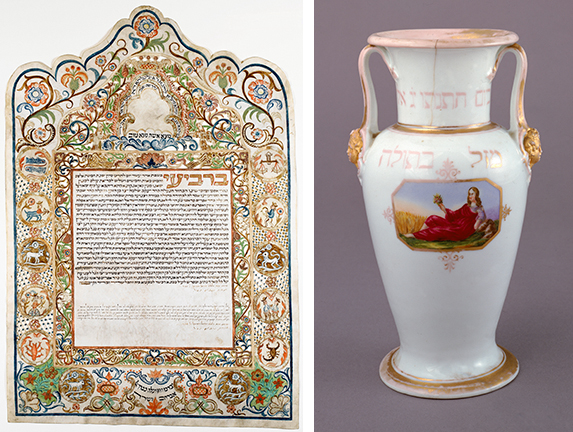 The Jewish Museum will present Signs and Symbols: The Zodiac from November 15, 2019 through September 14, 2020, featuring works from the Museum’s collection that depict the astrological signs. Jewish communities, adapting and adopting local practices over the centuries, incorporated these symbols into ceremonial objects, synagogue architecture, and art even though rabbinic authorities reject astrology as part of Jewish practice.

One of seven sections that make up the Jewish Museum’s third floor collection exhibition, Scenes from the Collection, “Signs and Symbols” explores the significance of a particular iconic element or motif in a variety of works.  Objects on view in The Zodiac range from c. 1300 to the 1950s and originate from Austria, Denmark, Germany, Iran, Israel, Italy, Poland, and the United States.

Depictions of zodiac signs display distinctive traits and also emulate other traditions. In Jewish contexts the sign of Aries is often a lamb, in accordance with the Hebrew name of the sign (talehor lamb), instead of the usual ram. Aquarius—dli (pail) in Hebrew—is a figure drawing water from a well or simply a bucket. Symbols were often divested of human representation, yet Virgo at times was rendered as a woman holding a flower following Christian tradition.  Such depictions were often included in richly decorated works used to mark life cycle events and holidays.

A 1958-59 wedding scene by artist Ilya Schor is flanked by the zodiac.  The twins of Gemini wear skullcaps and are ready to jump rope, a mischievous young archer takes aim as Sagittarius, a flying angel standing in for Aquarius pours water out of a jug, and Virgo has become a bride. Schor sought to create a style of art that embodied the folk culture of his Jewish childhood in Eastern Europe. This is one of two marriage blessings he made for his daughters as “a kind of artistic, historical, and spiritual dowry.” Zodiac symbols also appear in a 1793 Italian marriage contract. A nineteenth century Danish urn, presented as a wedding gift, features the symbol of Virgo.

A Torah crown created at the Bezalel School in Jerusalem in the 1910s exemplifies the school’s use of multiple techniques and materials with both Eastern and Western influences. An eighteenth century Torah crown and shield from Lwów (present-day Lviv, Ukraine) combine the zodiac with rococo forms common to synagogue design of the time.

Several objects on view are connected to specific Jewish holidays. A 1927 Purim wall decoration features fish for Pisces, the symbol for the Jewish month of Adar when the holiday is celebrated.  A small Hebrew calendar for the year 5704 (1943/44) was created in secret in Theresienstadt, a Nazi camp-ghetto that housed prisoners between 1941 and 1945. Its cover is decorated with all twelve symbols, corresponding to the months of the Jewish year.

The exhibition is organized by Claudia Nahson, Senior Curator, The Jewish Museum.