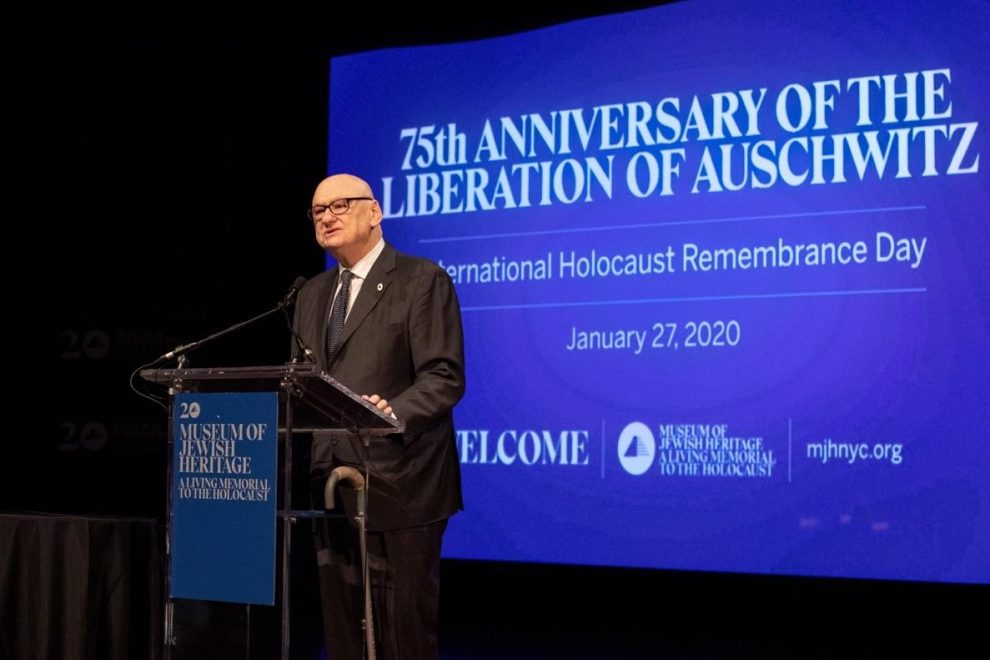 The Museum of Jewish Heritage – A Living Memorial to the Holocaust announces the appointment of Jack Kliger as President and Chief Executive Officer, following his highly successful run in an interim capacity last year.

“In a time of rising antisemitism, and after many years of involvement in our museum community, this role is the most meaningful of my career,” said Kliger. “The stakes are high for those of us working to combat hate and to honor the memory of those millions who lost their lives. I am honored to be entrusted with that responsibility and to lead a team so dedicated to this mission.”

In 2019, Kliger oversaw the opening of the museum’s groundbreaking exhibition, Auschwitz. Not long ago. Not far away. Originally scheduled to close in January of this year, the exhibition was extended through August of 2020 in response to the record number of visitors it has drawn. More than 165,000 people have visited to date since the exhibition’s opening in May 2019, and 45,000 of those visitors were students.

In January 2020, strengthening partnerships with both New York Governor Andrew Cuomo and New York City’s Department of Education, Kliger recommitted the museum to its educational mission, announcing new initiatives to welcome New York City school groups, students, and their family members free of charge and to establish the museum as a state-wide destination for Holocaust education.

“Our museum is fortunate to have Jack Kliger as its president and CEO. This is a critical time for our community, which is confronting increased antisemitism throughout the world. Jack is well qualified to ensure our success in the coming years,” said Bruce Ratner, chairman of the board. “His own family’s history drives a personal commitment to this work, and he also brings great business expertise from decades as a media executive. Our institution is fortunate to have someone with such qualifications in this leadership role.”

The mission of the Museum of Jewish Heritage – A Living Memorial to the Holocaust is to educate diverse visitors about Jewish life before, during, and after the Holocaust. Located in New York, it is the second-largest Holocaust museum in North America and the third-largest in the world.

Kliger was born in Florence, Italy to displaced Holocaust survivor parents. They emigrated to Brooklyn, New York when he was three-and-a-half years old.

In 1999, French media conglomerate Group Lagardère recruited Kliger to serve as President & CEO of Hachette Filipacchi Media U.S., which published 17 magazine brands in the United States, including the popular Elle, George, Woman’s Day, Premiere, and Car and Driver and was the fifth-largest magazine publisher in the United States. During a 10-year tenure in that role, he also served as Chairman of the industry trade association, the Magazine Publishers of America (now Association of Magazine Media).

From 2009 to 2014, Kliger provided consulting services for private equity firms Cerberus Capital Management and Open Gate Capital, which had acquired TV Guide Magazine, where he served as CEO. In 2011, he was appointed to the board of directors of World Color Press, Inc., one of the world’s largest commercial printers, which later merged with Quad Graphics.

Kliger’s accomplished career has been recognized with Lifetime Achievement Awards from the Magazine Publishers of America and the Anti-Defamation League, and he has leveraged his success in support of the causes and institutions to which he is most passionately committed.

He served for more than a decade on the Museum of Jewish Heritage’s board of trustees before his appointment as president and CEO.

He also serves on the board of directors for the Circle of Generosity, a charitable foundation based in New York, where he resides with his wife, Amy.