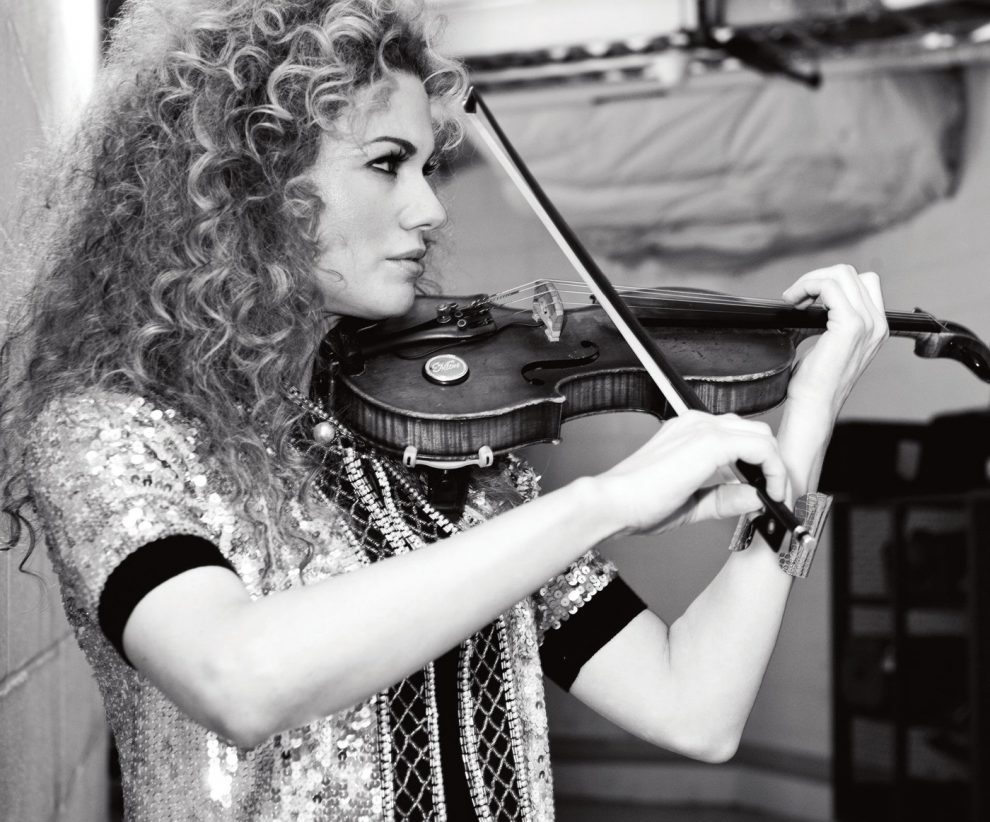 This is a producer and writer — as well as violinist, as you can see — behind musicians like Alicia Keys, Wu-Tang Clan and John Legend. This is the woman who won a Grammy Award for Kanye West’s “Jesus Walks.” This is the college dropout who had the sole honor of making the first (and only) instrumental song to feature Dr. Martin Luther King Jr.’s “I Have A Dream” speech.

Known as “Miss Melody” by Akon, she has been featured on over 50 hit songs, received dozens of both humanitarian and talent-based awards, performed at the White House and founded her own Holocaust awareness organization.

Now she’s ready to tell her story, her way. Not for revenge. Not for reverence. But to prove that if you don’t get what you want, try again. That when the doors keep slamming shut, you don’t stop trying to pick the locks.

This is a story of what happens when you tell the rebels no.

This is Miri Ben-Ari.

WAKE UP EVERYBODY
“I think I’ve done just about everything,” she shrugged from her Fort Lee, New Jersey home.

The classically-trained child prodigy studied under the late Isaac Stern and was discovered by jazz legend Betty Carter. Wynton Marsalis, the world’s first jazz artist to perform and compose across the genre’s full spectrum, is featured on Ben-Ari’s album, “Temple of Beautiful.” She played with the Israeli Army String Quartet while completing the mandatory military service.

The question becomes, perhaps, what makes Ben-Ari different from other violinists to the point of accruing such accolades?

“I came from the classical world; when I started hip-hop, it was the rebellion version of me,” she said. “I wanted to feel free, play what I wanted and break the rules. If you dig something, make some noise. I didn’t like how the classical music audience attended concerts and no one could say anything. Everyone [was] so uptight.”

Ben-Ari doesn’t — and has never — done well with “uptight.”

“I’m not really the [type of] person that’s good with institutes and stuff,” she said, referencing having dropped out of middle school, high school and college. “I dropped out of whatever there was to drop out of.”

The “irony of her life” was winning a Grammy for writing and producing on Kanye West’s “College Dropout” in 2004 for best rap song — anomalously making her the first violinist to receive a Grammy not in the classical category.

But irony has been thick throughout her career.

“The funniest thing is that I love to learn,” she said. “Going to college was amazing for me. I didn’t drop out of college because I didn’t want to be in college. That was different. College, I went for jazz.”

Coming to New York City from Israel to go to The New School, Ben-Ari had to make money. And to make money, she had to miss classes. And by missing classes, she failed music. And then the school took her scholarship away.

“They offered me a diploma later on,” she said. “I said, ‘No. I want to tell my story. Don’t buy me out.’ There’s something to learn from this story.”

She tells that story on stage.

“All I needed to do was just perform.Just to get myself to perform, because the audience was the judge,” she said. “I just wanted to be able to perform.”

RUN THIS CITY
Ben-Ari was on Sesame Street, starred in a Pepsi commercial and performed during nearly every NBA team’s half-time shows as well as at the NBA All-Star Games. She was the face of Reebok’s “I Am What I Am” global advertising campaign and a Jimi Hendrix public service announcement for BET. She’s performed for VHl’s “Save the Music” gala and for “Fashion Rocks” at Radio City Music Hall. She even performed during “Miss Universe China” at the invitation of media icon Yue-Sai Kan, “the Chinese Oprah.” She recently collaboration with Armin Van Buuren for the song “Intense,” which was chosen for the “song of the year” in trance music and she collaborated with Africa’s superstar Diamond Platnumz for the song “Baila.”

So how did all this happen?

“There was a lot of, how would I say? Arguments and fights to get this thing going on stage because they didn’t understand what the hell I was doing,” she said, referencing the early days of her career. “Every show started with a negotiation. Just to get people out of the box that have been thinking differently. This is the part that’s so difficult.”

But a result of tenacity leads to her tenure.

It was 2001 at the Apollo. Before crushing a rendition of Notorious B.I.G.’s “One More Chance” — an ironic choice for the artist — for a TV performance on Showtime, Wyclef Jean introduced Ben-Ari to the crowd as “the hip-hop violinist.” She then became the first violinist to be honored as an Apollo legend.

“I honestly thought I was on stage with my DJ, jamming, like jazz style,” she recalled of the experience. “I didn’t categorize myself as a hip-hop violinist; I was just jamming.”

With the newly-minted credit — and new genre to define her jamming — Ben-Ari made sure that, if you didn’t already know, the violin isn’t just for the classical, uptight world.

I put out “Quiet Storm” to demonstrate the fusion of classical and hip-hop. There’s a sweet point where you marry these two genres. The challenge of the song was to demonstrate that, to have fun with it and bring it with attitude.

“It should be available for all,” she matter-of-factly stated. “I would like to see kids — white kids, Black kids — everyone picking up a musical instrument, jamming and playing. And a lot of people have done that because of me. A lot of kids grew up, and I know, because I get the fan mail, and said that they played violin because of me.”

Her song “Quiet Storm” and the accompanying music video visually illustrate this point.

“It’s the idea of making it for all,” she explained. “Making music for all, and not to be afraid to fuse genres, and take this, and take that, and make it your own.”

This passion for making the violin accessible to all kids derives from her history. The third-generation Holocaust survivor grew up in a small town outside of Tel Aviv; the plight of African Americans wasn’t a subject covered in her education — even if she didn’t drop out, Black culture was not a focal point. After visiting Atlanta, Georgia, and learning about racism, Ben-Ari determined to promote inclusivity in her music.

In fact, “Symphony of Brotherhood” was the first instrumental song to make Billboard’s R&B/Hip Hop charts.

It’s also the only song, to this day, featuring the audio and video of Dr. Martin Luther King’s “I Have a Dream” speech. It was the first instrumental video MTV aired and led to Ben-Ari performing it at the President House injerusalem, where she was honored with the “Martin Luther King Award” by then-president, Shimon Peres.

It was another first that resulted from refusing to take no for an answer. But Ben-Ari believed so strongly in it that she flew to Los Angeles, shot it with George Duke and submitted it to the estate of Martin Luther King, Jr.

“Everyone said we had no shot because they just don’t green-light stuff like that; it’s the biggest speech of all time,” Ben-Ari said of the estate granting permission. “My attorney said, ‘Miri, you’re not going to get it.’ I said, ‘You know what? Let me send it to them. Let them see it and let them decide.’”

WE GONNA WIN
She got the green light within a few days.

“It’s so humbling. To this day I cannot believe that it actually happened,” she said. “That I could touch history, that’s something else.”

On the note of history, Ben-Ari co-founded her own foundation, Gedenk (Yiddish for “remember”) in 2006 to promote tolerance and education about Holocaust awareness and racism.

“More than 70% of young people in America don’t even know what the Holocaust is,” she said. “How can you expect them to learn from something they don’t even know? History is there to teach us lessons. And if we don’t know history, we cannot learn what not to do. The only way to prevent things from happening again is by talking about it, and that is what Gedenk does.”

Israel is the heart and soul of her violin’s sound, she said.

“It gave me the multicultural dimension of my career, the ‘chutzpah’ to dare doing something different, the desire for Tikun Olam, and the soulfulness of my violin playing.”

Ben-Ari has performed in many Jewish events, galas, fundraising, and even represented Israel a few times in the United Nations.

“The violin has been in my family for generations, it is the Jewish instrument of the Holocaust ghetto,” she said. “I happened to carry the tradition, my way.”

Aside from her organization, Ben-Ari has been honored by the American Israel Cultural Foundation, the UJA Federation of New York, The Israeli Film Festival, the Jewish Women International, and received the Ellis Island Medal of Honor, to name a few.

The United Nations Goodwill Ambassador of Music was also invited to the White House by First Lady Michelle Obama as a Remarkable Woman honoree in 2011. The following year she returned to perform for President Barack Obama, though it wasn’t her first rodeo with politicians. Ben-Ari performed in 2008 for Senator Hillary Rodham Clinton’s presidential campaign and was honored with the Aviv Award by the America-Israel Cultural Foundation in 2014 at its 75th gala at the Lincoln Center, hosted by Itzhak Perlman.

“I love performing live, and I love the diversity of my audience,” Ben-Ari remarked, explaining that because it’s the violin, it transcends demographics. “I can take my show from clubs to Carnegie Hall, to Madison Square Garden, to the most uptight venues. To the White House.”

She can also take her shows to Canada, though as of press time, her tour was postponed (after playing only a few performances) due to the COVID-19 crisis.

“My entire year of tours, corporate entertainment events and galas was wiped out,” she said. “2020 has been challenging for the music industry, I feel that we are entering a new era when it comes to artist booking with focus on digital platforms.”

Never one to miss a beat — no pun intended — Ben-Ari and “Beat Boss” Young D’s collaboration, Afrostringz, produced and released “She Don’t Know” less than a week after New York City’s shelter-at-home order was put in place.

“I am self-sufficient. I’m not at the mercy of anyone. And so, I create my own music,” she said. “I have been focusing on music production in my studio since the agency entertainment world of artist booking has stopped all activities.

“We, at Afrostringz, produce, engineer, record and perform live music that’s a cool fusion of African music with strings, a unique production and sound,” she said of her current project, which is getting ready to release the Afro remix for Fetty Wap’s “Trap Queen.”

“It’s an exciting time releasing music that represents a multicultural project, mixing violin with the rhythm of Africa to create a harmonized world. This is the power of music, to unite and bring people and communities together, especially in today’s world. Maybe not today, maybe not tomorrow, but Afrostringz is going to be there for a long time.”

If we’ve learned anything from Ben-Ari, it’s that she knows what she’s doing.

Every song I play has the classical element in it, but done my way.