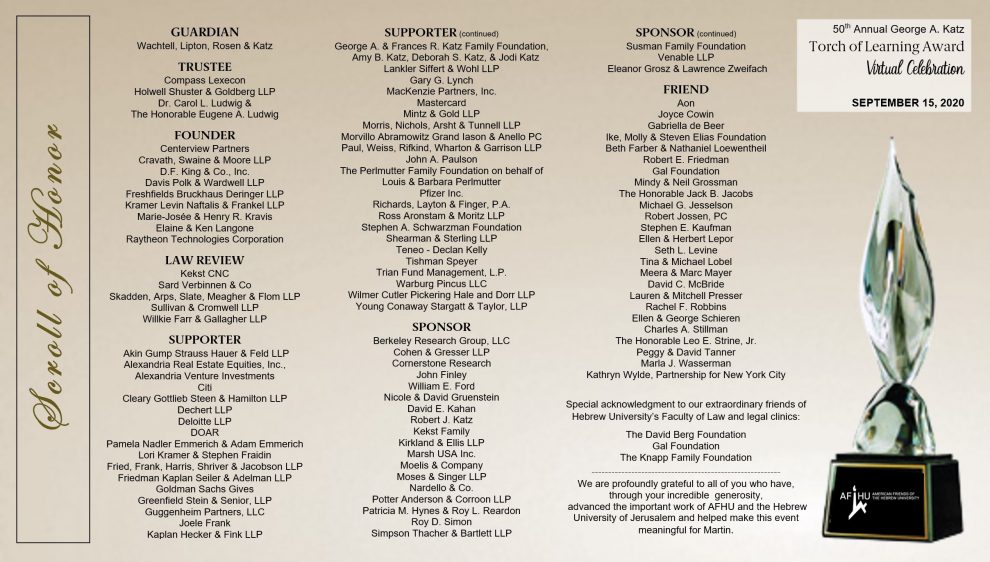 The award celebration, which pivoted this year to a virtual platform, was no less memorable or successful and it attracted colleagues, friends and firms from across the country. Proceeds from the event will benefit American Friends of the Hebrew University and the Hebrew University Faculty of Law.

Lipton, a leading corporate M&A policy strategist and inventor of the “poison pill” was shown to have a softer side, and colleagues, friends, and family members shared personal stories about Mr. Lipton and his accomplishments, recognizing this legal icon as a philanthropist, advocate for education and supporter of human rights.

“Attendees” and speakers joined from around the world to pay tribute to Mr. Lipton and Past Award Laureates. To commemorate the event’s 50th anniversary, special guests shared anecdotes about the event’s namesake, the late George A. Katz, co-founder of Wachtell, Lipton, Rosen & Katz, and philanthropic leader dedicated to the Hebrew University of Jerusalem and the mission of AFHU.

The program’s keynote speaker was Ambassador Dennis Ross, an expert on the Middle East who played a leading role in shaping U.S. involvement in the Middle East peace process. It was encouraging to hear his uplifting views and positive outlook for peace in the Middle East. Charles A. Stillman (Ballard & Spahr LLP), a past award recipient and friend to Mr. Lipton, introduced Ambassador Ross. A special guest speaker, participating from Israel, was Hebrew University’s former President, Chancellor, Menahem Ben­Sasson.

Pamela Nadler Emmerich, AFHU’s Northeast Region Co-President and HU alumna, set the tone for the event, opening the program, and providing context as to how the Faculty of Law grew to become Israel’s premier law school, garnering global recognition. Frances R. Katz, widow of the late George A. Katz, recounted the many ways Mr. Lipton and her extended family at Wachtel!, Lipton, Rosen & Katz, supported her over the years. Moreover, she expressed why she has continued George’s (z”I) legacy -­supporting students, faculty and research at the Hebrew University of Jerusalem. Presenting the award to Martin Lipton was Adam 0. Emmerich, HU alum and partner at WLRK.