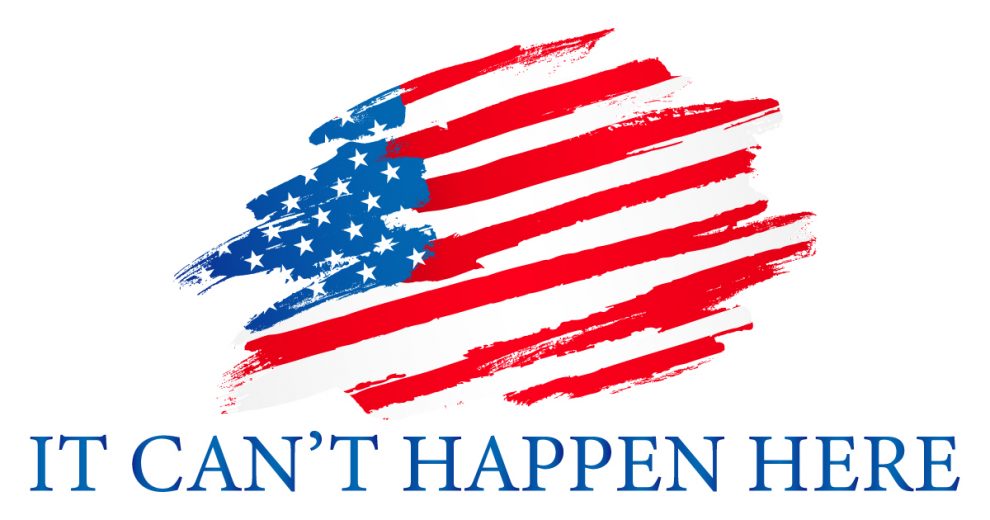 Adapted for the stage by John C. Moffitt and Sinclair Lewis in 1936, “It Can’t Happen Here” was presented simultaneously by 21 theater companies under the auspices of the Works Progress Administration (WPA) Federal Theater Project as fascism was on the rise in Europe. The work chronicles the rise of a demagogue who is elected President of the United States after fomenting fear and promising sweeping economic and social reforms while promoting a return to patriotism and “traditional” values.

The organizations are presenting the multi-lingual reading of this landmark play to bring attention to the need for greater support of the theater industry, which has been impacted in a dramatic way during the COVID-19 pandemic (and on the heels of the announcement that Broadway will not raise its curtain again until after May 2021). “It Can’t Happen Here” is a benefit, through permission from Theatre Authority, Inc. for the nine participating theater companies.

“We got hold of the script for ‘It Can’t Happen Here’ about a year ago, already knowing of its history with the Yiddish WPA theater. We had been planning to present a staged reading of this play before the pandemic struck,” said Motl Didner, Associate Director of the National Yiddish Theatre Folksbiene. “The idea to present this in several languages with many other theater companies came out of a conversation that we had with our friends at New Heritage Theatre Group / IMPACT Repertory Theatre about the need for a new Works Progress Administration to help artists and cultural organizations get through these times when we have seen the devastation of our entire industry. We are all in this together.”

“A powerful necessary voice from the 30s talking about today. It did happen in Italy, it can’t happen here?,” said Laura Caparrotti, President and Artistic Director of Kairos Italy Theater.

“The creation, history and significance of the 1930’s Works Progress Administration (WPA) Federal Theater Project, established during the great depression under President Franklin D. Roosevelt, placed a spotlight on the importance of the role of arts and culture in the United States,” said Voza Rivers, Executive Producer, and Jamal Joseph, Senior Artistic Director, at the New Heritage Theatre Group/ Impact Repertory Theatre. “Not only did the Federal Theatre Project program employ tens of thousands of workers in theater, music. arts, etc., it also supported racial integration of black and white Americans. Significant theatrical presentations were produced and presented. Because of the challenging times we are now living in today, COVID-19, systemic racism, and civil unrest, we applaud the National Yiddish Theater Folksbiene for selecting the 1936 play ‘It Can’t Happen Here’ by John C. Moffitt and Sinclair Lewis. A play that brings to light a message for today that “it can happen again” if our country and citizens can’t find a way of living together peacefully and in harmony. New Heritage Theatre Group believes that the positive power of theater, music, and art can break down any and all barriers of misunderstanding.”

“Since our inception in 1977, Pan Asian Rep has promoted stories seldom told and voices seldom heard. Our productions have focused on stories of probing social justice issues, making ‘It Can’t Happen Here’ a project that aligns directly with Pan Asian’s values. We are thrilled to join this roster of change-makers in the American Theater to tell this timely tale,” said Tisa Chang, Artistic Producing Director at Pan Asian Repertory Theater.

“The authoritarian playbook is neat, trim and oh so effective. It takes hold so quickly, so quietly, using predictable, repeatable steps that make it easy to just follow along. Stories can be disruptive. That’s part of their power,” said Bree O’Connor, Artistic Director at Playful Substance. “It may be disheartening to hear how familiar It Can’t Happen Here sounds to our 2020 ears, but what a gift it is to have voices from 1936 reach out to disrupt THIS moment. To disrupt us.”

“We are all in this thing together for sure. We want to move forward as a human race not backwards. We see a lot of similarities between now and then and we need to act smarter and be better and fix our mistakes. I am so happy to be a part of a multicultural, multinational project with my friends,” added Ayse Eldek Richardson, Turkish American Repertory Theater & Entertainment’s founder.

All Folksbiene! LIVE programs are presented at 1:00 PM. Stay in the loop and get reminders about new episodes by subscribing to Folksbiene’s newsletter, and catch up on past episodes on-demand, at nytf.org/live.

Prior to the presentation, Casa Italiana Zerilli-Marimò at New York University will hold a virtual discussion (in English) between Laura Caparrotti, Artistic Director at Kairos Italy Theater, and Motl Didner, Associate Artistic Director at National Yiddish Theatre Folksbiene, on Thursday, October 22 at 5:00 PM. The event is free, and will be aired on Casa ItalianaZerilli-Marimò’s Facebook page and website.

The special event features more than five dozen actors affiliated with participating theatrical organizations. You can view the full list of participants and directors on Folksbiene’s website here and at www.nytf.org/itcanthappenhere.