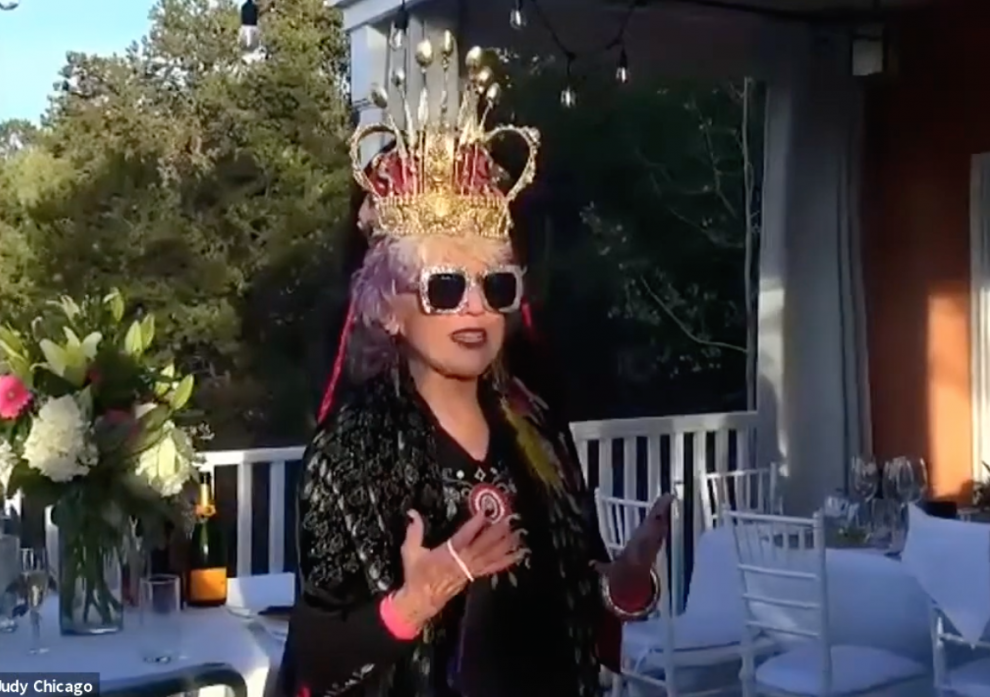 Judy Chicago burst into tears when crowned during The Museum of Art and Design (MAD) Ball 2020.

“I have gotten a number of awards, and this tops them all,” she said. “What is most meaningful to me is to help MAD because my goal always has been to make a contribution. I have a long history with MAD.”

The crown itself has “a vaginal opening, pink velvet center, snake symbols — which are the archetypical phallic motif — and spoons referencing Judy’s ‘The Dinner Party,'” explained artist Trulee Hall, who created the award made of heatform moldable thermoplastic sheets.

MAD Ball, a virtual benefit for the Museum of Arts and Design (MAD), connected people everywhere via Zoom, some even gathering safely for small, in-person watch parties at homes and restaurants. The action-packed evening kicked off with a warm introduction from MAD’s chair Michele Cohen live from East Hampton and was hosted by MX Justin Vivian Bond live from their home in Hudson, New York.

Rosanne Cash performed a heartfelt song and praised Chicago, “You’ve cleared a path for young women around the world. Not just young women but old women, as well.”

Judy Chicago was live via Zoom from the Santa Fe home of her friends and gallerists Tonya Turner Carroll and Michael Carroll and was joined by friends and collectors, including Jordan Schnitzer. Sporting her trademark smoky purple hair and magenta lips, she sparked a sartorial competition; MAD’s Chief Curator Elissa Auther wore “Judy” glasses and a yellow feather boa, while MAD Assistant Curator Angelik Vizcarrondo-Laboy appeared with a full face of artful rainbow eye shadow.

The evening included a live conversation with Judy, a conversation between Chicago and Auther produced by Chiara Clemente and a tour of The Dinner Party with Brooklyn Museum Curator Carmen Hermo.

Tinu Naija, philanthropist and designer, delivered a personal message to MAD Champions Award recipient Barbara Tober (in Valentino). “To my good friend … I miss you, our lunches and your very handsome husband,” said Naija, with a big smile on her face. Also celebrated were Donald Tober and MAD’s longtime trustees Simona and Jerome A. Chazen and Laura and Lewis Kruger.

The evening included a special tribute in remembrance of the late Nanette L. Laitman by Michele Cohen and Laitman’s granddaughter Abby Eletz.

The annual MAD Ball, like MAD itself, celebrates the role of craft in history, culture and society. Founded and nurtured by philanthropist Aileen Osborn, MAD places the value of craft at the center of its focus, promoting a view of the world unobstructed by traditional definitions of fine art.